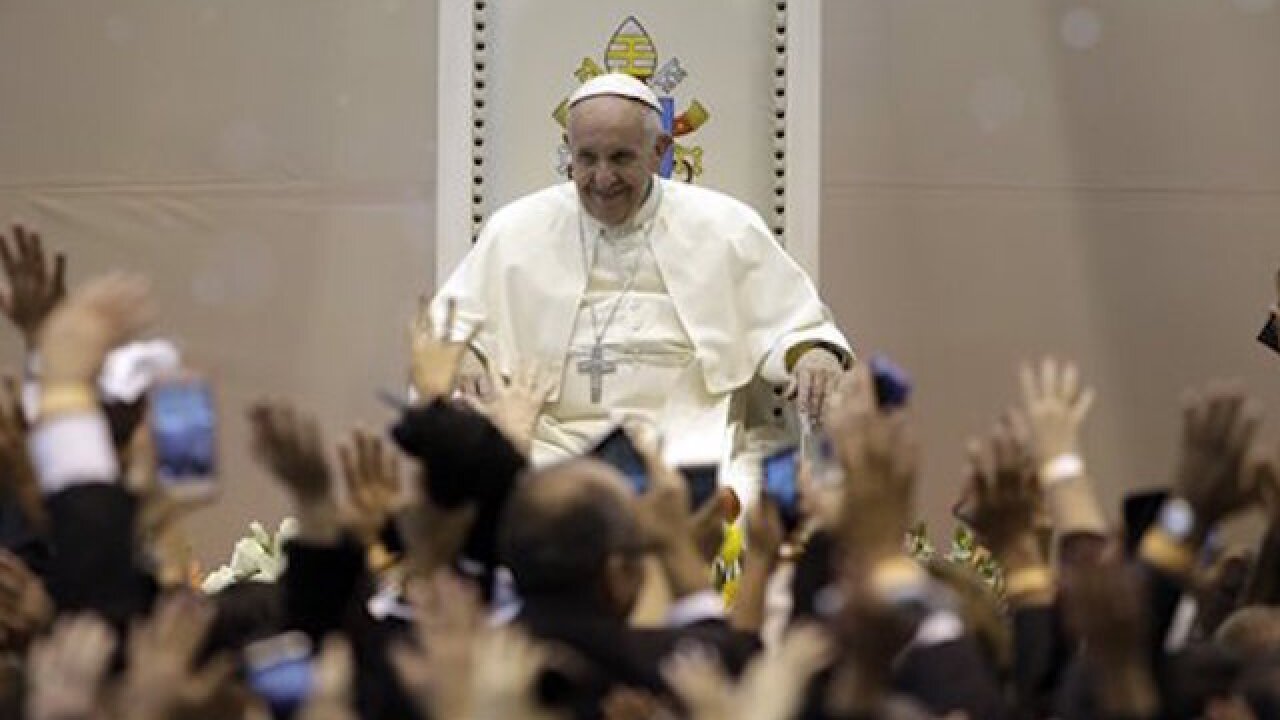 Gregorio Borgia
<p>Pope Francis smiles as members of the World of Work organization wave at him in Ciudad Juarez, Mexico, Wednesday, Feb. 17, 2016. The pontiff is scheduled to wrap up his trip to Mexico on Wednesday with a visit in a Ciudad Juarez prison, just days after a riot in another lockup killed 49 inmates, and a stop at the Texas border when immigration is a hot issue for the U.S. presidential campaign. (AP Photo/Gregorio Borgia)</p>

CIUDAD JUAREZ, Mexico (AP) — In a moment filled with powerful political symbolism, Pope Francis prayed Wednesday at Mexico's dusty northern border for the thousands of migrants who have died trying to reach the United States and appealed for governments to open their hearts, if not their borders, to the "human tragedy that is forced migration."

"No more death! No more exploitation!" he implored.

It was the most poignant moment of Francis' five-day trip to Mexico and one of the most powerful images in recent times: History's first Latin American pope, who has demanded countries welcome people fleeing persecution, war and poverty, praying at the border between Mexico and El Paso, Texas at a time of soaring anti-immigrant rhetoric in the U.S. presidential campaign.

Francis stopped short of calling for the U.S. to open its borders during a Mass just 800 meters (yards) from the frontier. But in his homily beamed live into the Sun Bowl stadium on the El Paso side, Francis called for "open hearts" and recognition that the thousands of Central and South Americans who are fleeing gangland executions and extortion in their homelands are victims of the worst forms of exploitation.

"We cannot deny the humanitarian crisis which in recent years has meant the migration of thousands of people, whether by train or highway or on foot, crossing hundreds of kilometers through mountains, deserts and inhospitable zones," he said. "They are our brothers and sisters, who are being expelled by poverty and violence, drug trafficking and organized crime."

And then, in a pointed message, Francis added a politically charged greeting to the 30,000 people gathered in the Sun Bowl to watch the simulcast on giant TV screens.

"Thanks to the help of technology, we can pray, sing and celebrate together this merciful love which the Lord gives us, and which no frontier can prevent us from sharing," Francis said in Spanish. "Thank you, brothers and sisters of El Paso, for making us feel like one family and the same Christian community."

Francis, a son of Italian immigrants to Argentina, had wanted to cross the border in solidarity with other migrants when he visited the U.S. last fall. That wasn't possible for logistical reasons, so he did the next best thing on Wednesday by coming within a stone's throw of the fence and laying a bouquet of flowers next to a large crucifix that is to remain at the site as a monument to his visit. As the faithful looked on from both sides of the border, Francis blessed the cross and three smaller ones, which the Vatican said were to be sent to the diocese of Ciudad Juarez, Las Cruces and El Paso.

While migrant activists on both sides of the border cheered the gestures, Republican presidential hopeful Donald Trump criticized it last week as a politicized and ill-informed move.

"I don't think he understands the danger of the open border that we have with Mexico," Trump said in an interview with Fox television. "I think Mexico got him to do it because they want to keep the border just the way it is. They're making a fortune, and we're losing."

He and GOP hopeful Sen. Ted Cruz have vowed to expel all the estimated 11 million immigrants in the U.S. illegally and build a wall along the border from Texas to California.

Asked to comment on the criticism, the Vatican spokesman, the Rev. Federico Lombardi, said Tuesday the pope is concerned about the plight of migrants everywhere, not just in the United States.

"The pope always talks about migration problems all around the world, of the duties we have to solve these problems in a humane manner, of hosting those who come from other countries in search of a life of dignity and peace," Lombardi said.

The border Mass marked the climactic end of Francis' five-day swing through some of Mexico's poorest and most marginal states, where drug-fueled violence has soared thanks to the complicity of police and other public institutions. Francis took both church and state to task for failing their people and urged the next generations to resist the lure of the drug trade.

In a speech Wednesday to workers and employers, Francis warned that without job opportunities, Mexico's youth risk being seduced into the drug trade. "Poverty becomes the best breeding ground for the young to fall into the cycle of drug-trafficking and violence," he said.

He urged employers to think instead of the Mexico they want to leave for their children.

"Do you want to leave them the memory of exploitation, of insufficient pay, of workplace harassment?" he asked. "What air will they breathe? An air tainted by corruption, violence, insecurity and suspicion or, on the contrary, an air capable of generating alternatives, renewal and change?"

Francis began his final day at Prison No. 3 in Ciudad Juarez, a city that was once considered the murder capital of the world. As a prison band serenaded him with their own mariachi compositions, Francis greeted a few dozen inmates clad in matching gray sweatsuits and white sneakers in a prison courtyard.

They had been selected because of their good behavior. Looking on from the barred window of the lockup, a small cluster of guards could be seen watching Francis' encounter as the smell of fresh paint and new tree saplings indicated a last-minute spruce-up for the occasion.

Francis told the 700 or so inmates gathered outside the prison's new chapel that they cannot undo the past. But he said they must believe that things can change, and that they have the possibility of "writing a new story and moving forward."

"You have known the power of sorrow and sin and have not forgotten that within your reach is the power of the resurrection, the power of divine mercy which makes all things new."

He urged the inmates to use their experience in prison for good, to help end the cycle of violence that has torn Mexico apart in recent years.

"The one who has suffered the greatest pain, and we could say has experienced hell, can become a prophet in society," he said. "Work so that this society, which uses people and discards them, will not go on claiming victims."

Francis' message of hope came just days after a deadly riot at Monterrey's Topo Chico prison, where rival gang factions last week bloodied one another with hammers, cudgels and makeshift knives. Eight more inmates were injured Tuesday in a brawl at another prison.

Not long ago Juarez was wracked by violence as cartel-backed gang warfare fed homicide rates that hit 230 per 100,000 residents in 2010. A rash of killings of women, many of them poor factory workers who just disappeared, attracted international attention.

Times have changed, though. Last year, the city's homicide rate was about 20 per 100,000 people, roughly on par with Mexico's nationwide average of 14 per 100,000 — and well below what is being seen in current hotspots of drug violence, such as the Pacific resort city of Acapulco and surrounding Guerrero state.

Many businesses that closed during Juarez's darkest years have reopened. Tourists are again crossing over from the United States to shop and dine. People say they no longer have to leave parties early to avoid being on the streets after dark.

"At least now we can go out. We go to the parks. We can walk around a little more at that time of night," said resident Lorena Diaz, standing under a huge banner of Francis hanging from her second-story balcony.

Diaz, who along with about 30 family members secured tickets for Wednesday's Mass, has followed news of Francis' tour and welcomed his calls for Mexicans not to tolerate corruption and violence.

"He's telling us to get out of the trenches, not to close ourselves off," Diaz said.