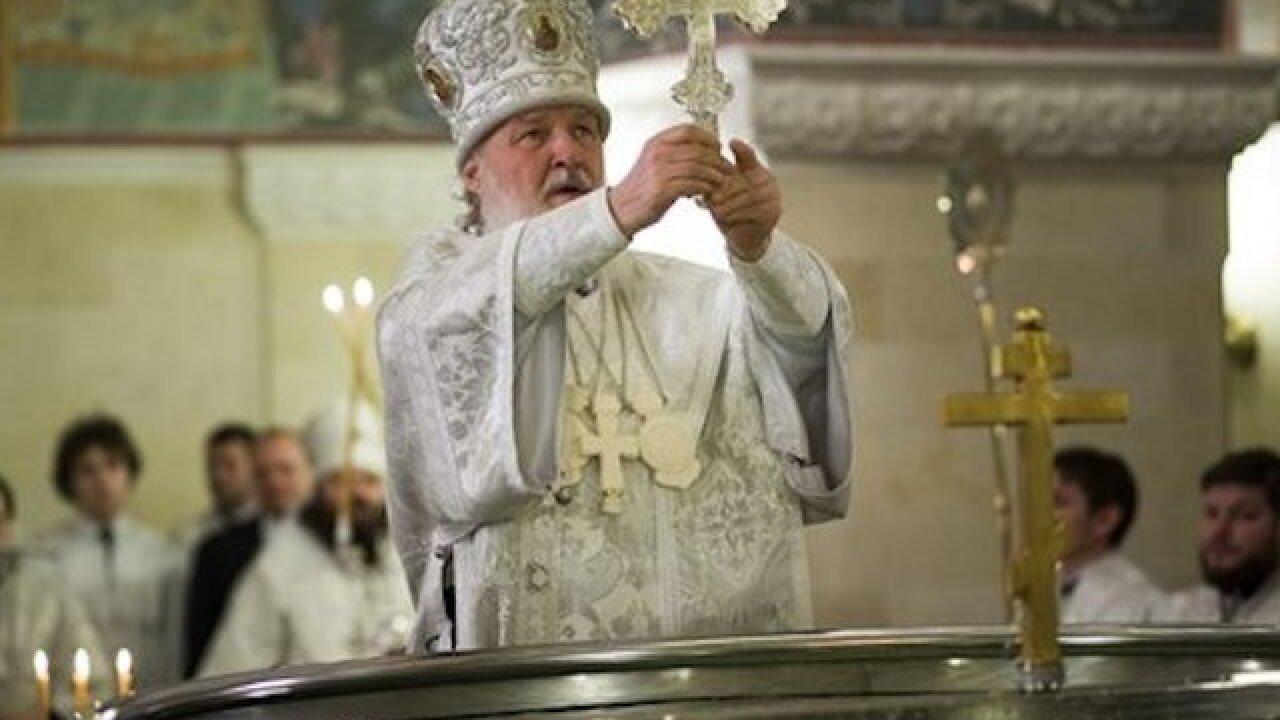 Copyright Associated Press
Alexander Zemlianichenko
<p>Russian Orthodox Church Patriarch Kirill conducts an Orthodox Epiphany service at Christ The Savior Cathedral in Moscow, Russia, Monday, Jan. 18, 2016. Water that is blessed by a cleric on Epiphany is considered holy and pure until next year's celebration, and is believed to have special powers of protection and healing. The Russian Orthodox Church follows the old Julian calendar, according to which Epiphany falls on Jan. 19. (AP Photo/Alexander Zemlianichenko)</p>

VATICAN CITY (AP) — Pope Francis and the leader of the Russian Orthodox Church will meet in Cuba next week in a historic step to heal the 1,000-year-old schism that divided Christianity between East and West, both churches announced Friday.

The meeting between Francis and Patriarch Kirill will be the first ever between the leaders of the Catholic and Russian Orthodox churches.

Francis is due to travel to Mexico Feb. 12-18. He will stop in Cuba on the way and meet with Kirill on Feb. 12 at the Havana airport, where they will sign a joint declaration, a joint statement said.

The two churches split during the Great Schism of 1054 and have remained estranged over a host of issues, including the primacy of the pope and Russian Orthodox accusations that the Catholic Church is poaching converts in Russia.

Those tensions have prevented previous popes from ever meeting with the Russian patriarch, even though the Vatican has long insisted that it was merely ministering to the tiny Catholic community in largely Orthodox lands.

The persecution of Christians — Catholic and Orthodox — in the Middle East and Africa, however, has had the effect of bringing the two churches closer together.

In November 2014, Francis had said he had told Kirill. "I'll go wherever you want. You call me and I'll go." Kirill will be in Cuba on an official visit.

The meeting, which was announced jointly at the Vatican and in Moscow, marks a major development in the Vatican's long effort to bridge the divisions in Christianity.

In the joint statement, the two churches said the meeting "will mark an important stage in relations between the two churches. The Holy See and the Moscow Patriarchate hope that it will also be a sign of hope for all people of good will. They invite all Christians to pray fervently for God to bless this meeting, that it may bear good fruits."

Metropolitan Illarion, foreign policy chief of the Russian Orthodox Church, told reporters on Friday that there are still core disagreements between the Holy See and the Russian Church, in particular on various Orthodox churches in western Ukraine.

"Despite the existing ecclesiastical obstacles, a decision has been taken to hold a meeting between Patriarch Kirill and Pope Francis," he said.

"The situation in the Middle East, in northern and central Africa and in other regions where extremists are perpetrating a genocide of Christians requires immediate action and an even closer cooperation between Christian churches," Illarion said. "In this tragic situation, we need to put aside internal disagreements and pool efforts to save Christianity in the regions where it is subject to most severe persecution."

But the Russian Orthodox Church, which is the largest church in Orthodoxy and the most powerful, has always kept its distance from Rome. Joint theological commissions have met over the years and the Russian church's foreign minister has made periodic visits to Rome, but a pope-patriarch meeting has never been possible until now.

About two-thirds of the world's Orthodox Christians belong to the Russian Orthodox Church, the Vatican spokesman, the Rev. Federico Lombardi, said.

About 75 percent of Russia's 144 million population call themselves Russian Orthodox, according to the latest polls, although only a fraction of them say they are observant. The Catholic Church claims about 1.2 billion faithful.

Under Francis, the Vatican has encouraged continuing ecumenical ties with the Orthodox as well as other Christian denominations. And it has gone out of its way to be solicitous to Russia, especially in shying away from directly criticizing Moscow over its role in the Ukraine conflict.

Ever since Kirill took the helm of the Russian Orthodox Church in 2009, the church has enjoyed increasingly close ties with the Kremlin that critics have dismissed as the de-facto merging of the state and the church.