Pope: Contraception could be condoned for Zika 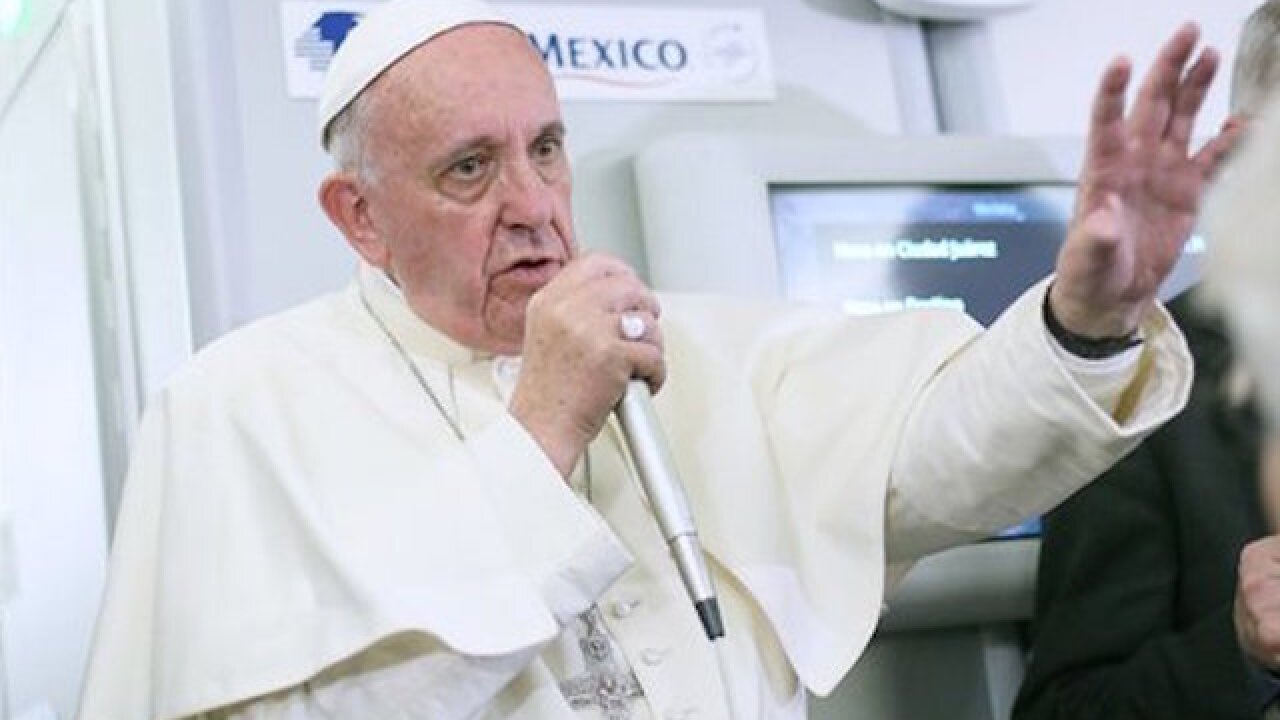 Alessandro Di Meo
<p>In this photo taken Wednesday, Feb. 17, 2016 Pope Francis meets journalists aboard the plane during the flight from Ciudad Juarez, Mexico to Rome, Italy. The pope has suggested that women threatened with the Zika virus could use artificial contraception but not abort their fetus, saying there's a clear moral difference between aborting a fetus and preventing a pregnancy. (Alessandro Di Meo/Pool Photo via AP)</p>

ABOARD THE PAPAL PLANE (AP) — Pope Francis has suggested that women threatened with the Zika virus could use artificial contraception, saying there's a clear moral difference between aborting a fetus and preventing a pregnancy.

Francis was asked Wednesday en route home from Mexico if abortion or birth control could be considered a "lesser evil," when confronting the Zika crisis in Brazil, where some babies have been born with abnormally small heads to Zika-infected mothers.

The World Health Organization has declared a global health emergency over the Zika virus and its suspected links to birth defects. The virus has been reported in at least 34 countries, many of them in Central and Latin America. WHO and the U.S. Centers for Disease Control and Prevention have advised pregnant women to consider delaying travel to Zika-infected countries.

The explosion of Zika cases has prompted some governments in Latin America to urge women to avoid getting pregnant and has fueled calls from abortion rights groups to loosen the strict anti-abortion laws in the overwhelmingly Catholic region.

But Francis excluded abortion absolutely from the debate.

"Abortion isn't a lesser evil, it's a crime," he told reporters. "Taking one life to save another, that's what the Mafia does. It's a crime. It's an absolute evil."

Francis, however, drew a parallel to the decision taken by Pope Paul VI in the 1960s to approve giving nuns in Belgian Congo artificial contraception to prevent pregnancies because they were being systematically raped.

Abortion "is an evil in and of itself, but it is not a religious evil at its root, no? It's a human evil," he said. "On the other hand, avoiding pregnancy is not an absolute evil. In certain cases, as in this one (Zika), such as the one I mentioned of Blessed Paul VI, it was clear."

The Rev. James Bretzke, a moral theologian at Boston College, said the pope's remarks did not amount to any change, but were in "perfect consistency with the traditional moral teaching" of the church. Bretzke noted that Pope Paul VI's 1968 encyclical "Humanae Vitae," which affirmed the church prohibition against artificial birth control, allowed for some circumstances under which "contraceptive means" could be used for treatment or disease prevention.

Angelica Rivas, of the Feminist Collective for Social Development in El Salvador, said the pope's remarks would not be much help since the church in her country has consistently opposed sex education on the use of contraception, and birth control would not help the many women who are already pregnant.

"We have to give them the alternative of interrupting the pregnancy," Rivas said.

Francis has tended to downplay the fraught moral hand-wringing over sexual ethics that preoccupied his predecessors, John Paul II and Benedict XVI. He has said the church shouldn't be "obsessed" with such issues.

Coming home from Africa last year, Francis dismissed a question about whether condoms could be used in the fight against AIDS, saying there were far more pressing issues in Africa, such as poverty and exploitation, and that only when those problems were resolved should questions about condoms and AIDS take center stage.

Francis, history's first Latin American pope, did urge doctors to come up with a vaccine to prevent Zika from spreading. "This needs to be worked on," he said.

Several of Latin America's conservative churchmen have reasserted the church's opposition to both abortion and artificial contraception as more reports of Zika cases and brain-damaged babies emerged.