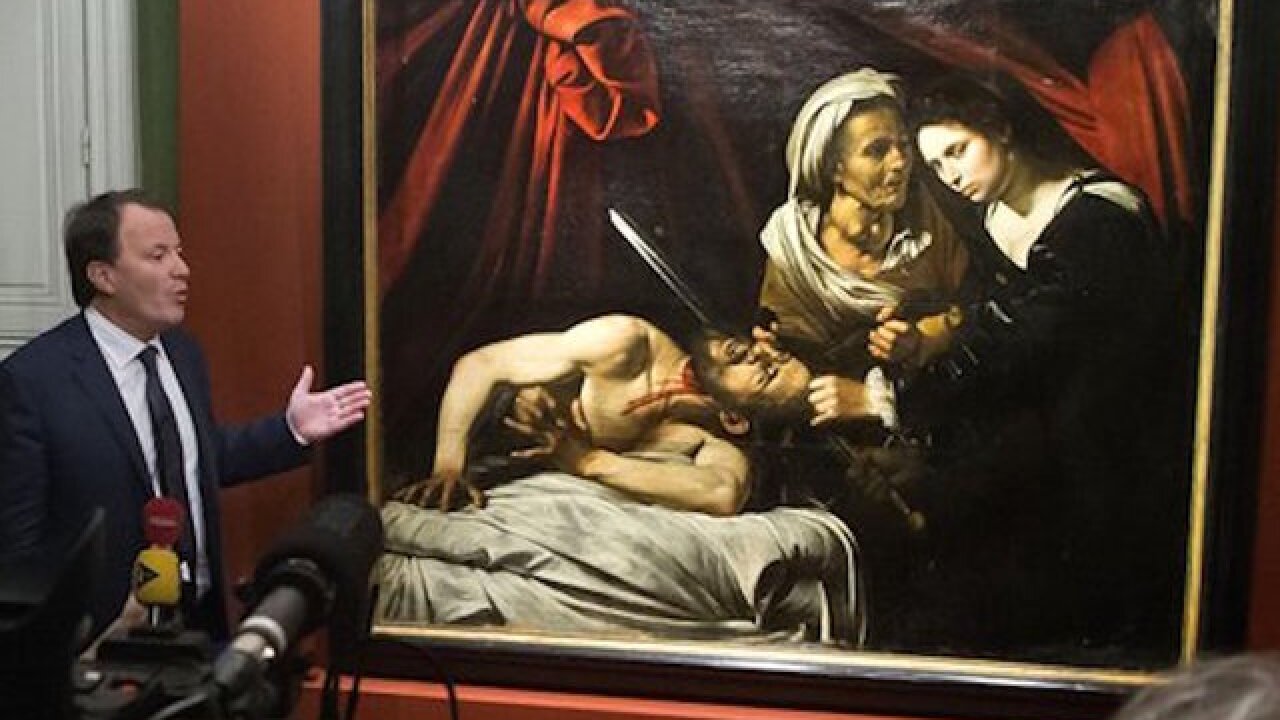 Copyright Associated Press
Michel Euler
<p>Auction officer Marc Labarbe presents the painting to the media in Paris, Tuesday, April 12, 2016. A 400-year-old painting that might have been executed by Italian master Caravaggio and could be worth more than 100 million euros has been found in an attic in Southern France.The picture, whose authenticity has not been established, had been left for more than 150 years in a property in the outskirts of Toulouse. (AP Photo/Michel Euler)</p>

PARIS (AP) — A 400-year-old painting that might have been executed by Italian master Caravaggio has been found in an attic in southern France.

Eric Turquin, the French expert who retrieved the painting two years ago, says it is in an exceptional state of conservation and estimates its value at 120 million euros (about $135 million).

The picture, whose authenticity has not been established, had been left for more than 150 years in a property in the outskirts of Toulouse.

Called "Judith Beheading Holofernes," it depicts the biblical heroine Judith beheading an Assyrian general. It is thought to have been painted in Rome circa 1604-05.

Turquin told a news conference on Tuesday that there "will never be a consensus" about the name of the artist.

Two Caravagio experts he consulted with attributed the painting to Louis Finson, a Flemish painter and art dealer who was familiar with Caravaggio, Turquin said. Finson possessed a number of works from the Italian master and made copies of his pictures.

"But the third expert I met told me that it was not only a Caravaggio, but also a masterpiece," Turquin said. "'Judith Beheading Holofernes' must be considered the most important painting, by far, to have emerged in the last 20 years by one of the great masters."

The picture has been awarded "National Treasure" status by French authorities, meaning that it can't be exported for 30 months, leaving the national museums enough time for its acquisition.

While stating that the art work has yet to be authenticated, France's ministry of culture justified its decision to ban the export of the painting because it "deserves to be kept on (French) territory as a very important landmark of Caravaggism."

The owners of the house in Toulouse discovered the painting, which had been partially damaged by water, when they went to the attic to fix a leak.

They telephoned local auctioneer Marc Labarde. After using cotton wool and water to clean it, he recognized a 17th-century painting from the Caravaggio school.

"I told the owners they had found a beautiful picture and gave them an estimation that I do not dare say," said Labarde, a close partner to Turquin. "Then I had it sent to Paris."

Turquin kept the picture away from the public's eyes for two years, cleaning it and submitting it to a deep examination that included infra-red reflectography and X-rays. Because of the painting's large size, some of the checks were made at a veterinary school.

"In between a horse and a cow, the radiologist was a bit surprised," Turquin joked. "Then she told us we brought her a stolen picture, because she thought it was actually the contemporary copy from Finson."

That copy is on exhibition in Naples and belongs to an Italian bank.

According to Turquin's team of experts, the two paintings were recorded in Finson's will made in Amsterdam in 1617. Then the original disappeared.

"I don't need further expertise, everybody agrees on the fact that it's one of the most important masterpieces from the 17th century to have emerged over the past 30 years," said Turquin, who has been watching over the painting. Since its delivery in Paris, he has been sleeping with the painting in his bedroom, as a security measure.