Potholes cause $3 billion in damages annually 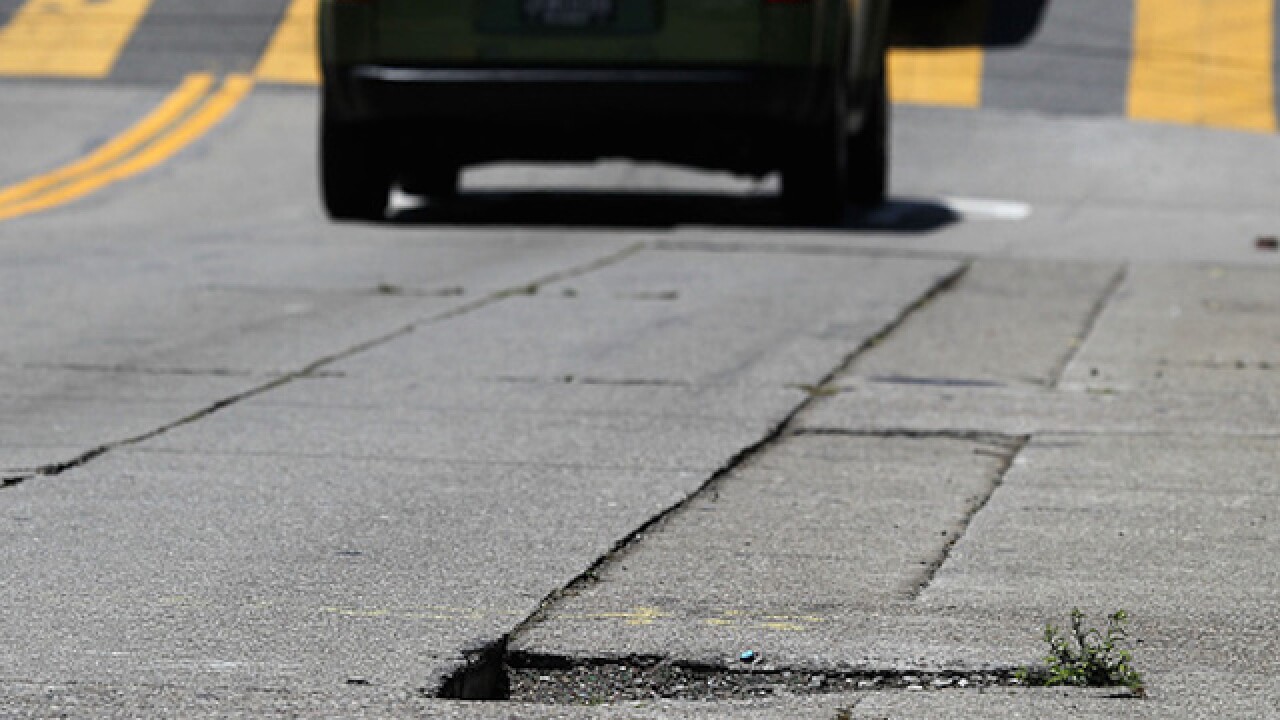 Justin Sullivan
<p>SAN FRANCISCO, CA - JULY 28: A car drives by a large pothole on July 28, 2015 in San Francisco, California. According to a report by TRIP, a Washington D.C. based national transportation research group, California roads are some of the worst in the U.S. with the San Francisco -Oakland areas topping the list with 74 percent of roads considered to be in poor condition and cost motorists an average of $1,000 a year in damage to their vehicles. Los Angeles ranked second with 73 percent of roads comprimised. (Photo by Justin Sullivan/Getty Images)</p>

Those pesky potholes that popup every winter are costing Americans $3 billion annually in car damage, according to estimates released Wednesday by the travel agency AAA.

AAA’s study found that 31 percent of drivers age 35 to 44 experienced some pothole damage to their cars. The average repair bill is $306 for pothole damage, and the most common pothole-related damage is to a tire, wheel or suspension.

“On average, American drivers report paying $300 to repair pothole-related vehicle damage,” John Nielsen, AAA’s managing director of Automotive Engineering and Repair, said in a statement. “Adding to the financial frustration, those whose vehicles incurred this type of damage had it happen frequently, with an average of three times in the last five years.”

Part of the blame, according to AAA, is a lack of transportation funding. Nearly $170 billion in additional funding is needed to improve America’s roads, according to the agency.

Adding insult to injury, many cities will only pay damages caused by potholes under limited conditions. In Columbus, Ohio - a city that has had several brutal winters in a row – the city only paid out one pothole claim from 2013 through 2015, according to WBNS-TV.

AAA has several recommendations to prevent damage from potholes.

Inspect tires – Make sure tires are properly inflated and have enough tread . An underinflated or badly worn tire is more likely to suffer damage, or allow the wheel or suspension to be damaged, when hitting a pothole. When checking tire pressures, ensure they are inflated to the manufacturer’s recommended levels, which can be found in the owner’s manual or on a sticker on the driver’s door jamb.

Inspect suspension – Make certain struts, shock absorbers and other suspension parts are in good condition. Changes in vehicle handling, excessive vibration or uneven tire wear can indicate damaged or worn components. Have the suspension inspected by a certified technician if you suspect problems.

Look ahead – Make a point of checking the road ahead for potholes. An alert driver may have time to avoid potholes, so it’s important to stay focused on the road and not any distractions inside or outside the vehicle. Before swerving to avoid a pothole, check surrounding traffic to ensure this won’t cause a collision or endanger nearby pedestrians or cyclists.

Slow down – If a pothole cannot be avoided, reduce speed safely being sure to check the rearview mirror before any abrupt braking. Hitting a pothole at higher speeds greatly increases the chance of damage to tires, wheels and suspension components

Beware of puddles – A puddle of water can disguise a deep pothole. Use care when driving through puddles and treat them as though they may be hiding potholes.

Check alignment – Hitting a pothole can knock the wheels out of alignment and affect the steering. If a vehicle pulls to the left of right, have the wheel alignment checked by a qualified technician.

Recognize noises/vibrations – A hard pothole impact can dislodge wheel weights, damage a tire or wheel, and bend or even break suspension components. Any new or unusual noises or vibrations that appear after hitting a pothole should be inspected immediately by a certified technician.