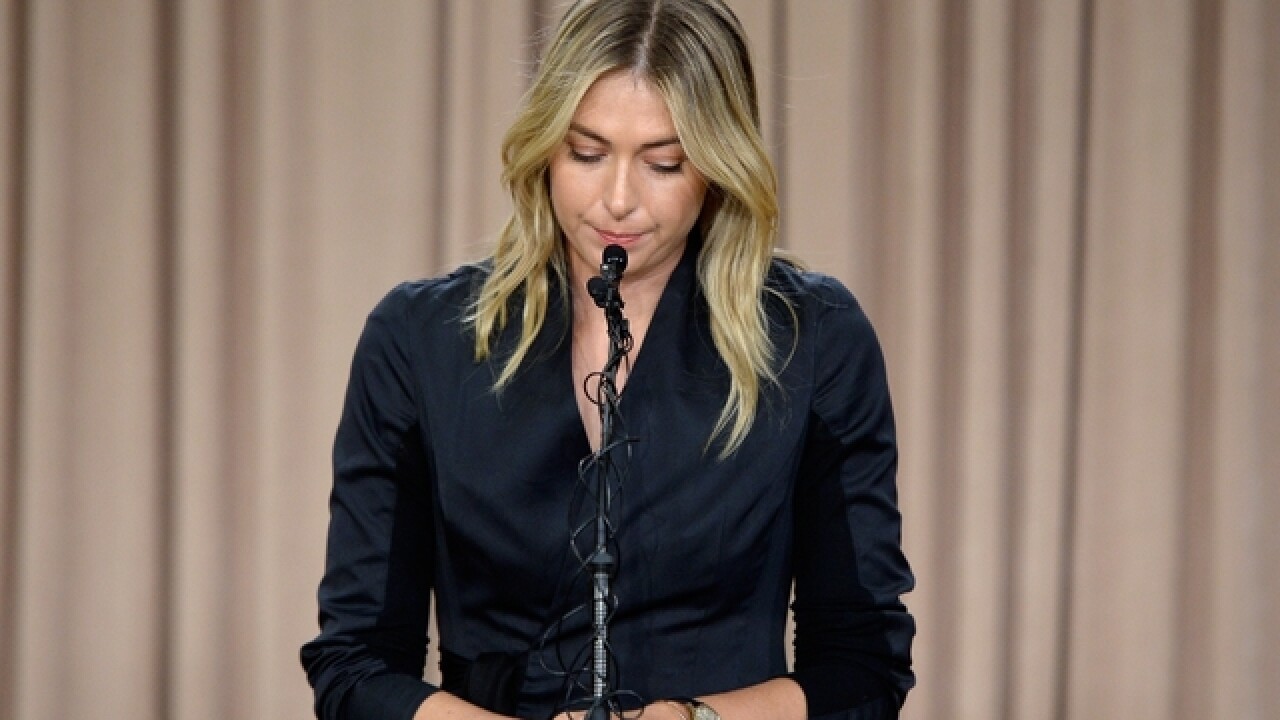 LONDON (AP) — Maria Sharapova was guilty of "willful negligence" for using meldonium, and international tennis officials were aware that many players were taking the drug before it was banned this year, former World Anti-Doping Agency president Dick Pound said Wednesday.

Pound told The Associated Press that Sharapova could face a ban of up to four years unless she can prove mitigating circumstances to explain her positive test for meldonium at the Australian Open in January.

Meldonium, a Latvian-manufactured drug designed to treat heart conditions, was added to the World Anti-Doping Agency's banned list on Jan. 1 after authorities noticed widespread use of the substance among athletes.

In announcing her positive test at a news conference in Los Angeles on Monday, Sharapova said she had been using the drug for 10 years for various medical issues. The five-time Grand Slam champion and world's highest-earning female athlete said she hadn't realized meldonium had been prohibited this year, taking full responsibility for her mistake.

"An athlete at that level has to know that there will be tests, has to know that whatever she or he is taking is not on the list, and it was willful negligence to miss that," Pound said. "She was warned in advance I gather. The WADA publication is out there. She didn't pay any attention to it. The tennis association issued several warnings, none of which she apparently read."

"I am sorry, if you are running a $30 million a year sole enterprise you better make sure the basis for that commercial success, if nothing else, remains unassailable," Pound added in the interview with the AP on the sidelines of the Tackling Doping in Sport conference at Twickenham Stadium.

"If the reports are true and this was happening when she was a teenager, then you begin to wonder why a drug that is basically to help heart problems was administered," he said.

Pound disclosed that international tennis officials had flagged up the use of meldonium to the WADA committee that monitors the use of various drugs and recommends whether to put them on the banned list.

"Clearly, within the tennis circle at least, they were aware that a lot of the players were using it (meldonium) and said that there must be something to this, so they referred it to the WADA list committee," Pound said.

So far, Sharapova is the only tennis player with a known positive test for meldonium.

Meldonium, which is not approved by the U.S. Food and Drug Administration, was banned by WADA because it aids oxygen uptake and endurance. Several other athletes in various international sports have already been caught using it since it was banned Jan. 1.

Sharapova is being provisionally suspended by the International Tennis Federation, which will hold hearings on the case and decide on any long-term ban.

"She faces up to four years sanction for this," Pound said. "There will have to be a review of whatever mitigating factors there may be, and not many leap to mind."

Pound said he did not understand why Sharapova would have been taking the drug for so long.

The player said Monday that she had taken meldonium for a decade following various health problems including regular sicknesses, early signs of diabetes and "irregular" results from echocardiography exams.

"Looking at it from 10,000 feet and from outside, you say, 'I am sorry but that doesn't hold together,'" Pound said. "You're in the United States, this is a product that is not available in the United States, and so there has got to be more to this than meets the eye. She will have the burden of saying, 'Here's why I don't think I should face the full four years.'"

Grindeks, the Latvian company that manufactures meldonium, said the normal course of treatment with meldonium is four to six weeks.

"One of the issues that will have to be dealt with is that the use of this product for therapeutic purposes is not a long term," Pound said. "You use it for a single intervention for weeks or months maybe but not for 10 years in a row."

Sharapova's lawyer, John J. Haggerty, said Tuesday that he wanted "to disabuse the concept that Maria took mildronate every day for 10 years because that's simply not the case."