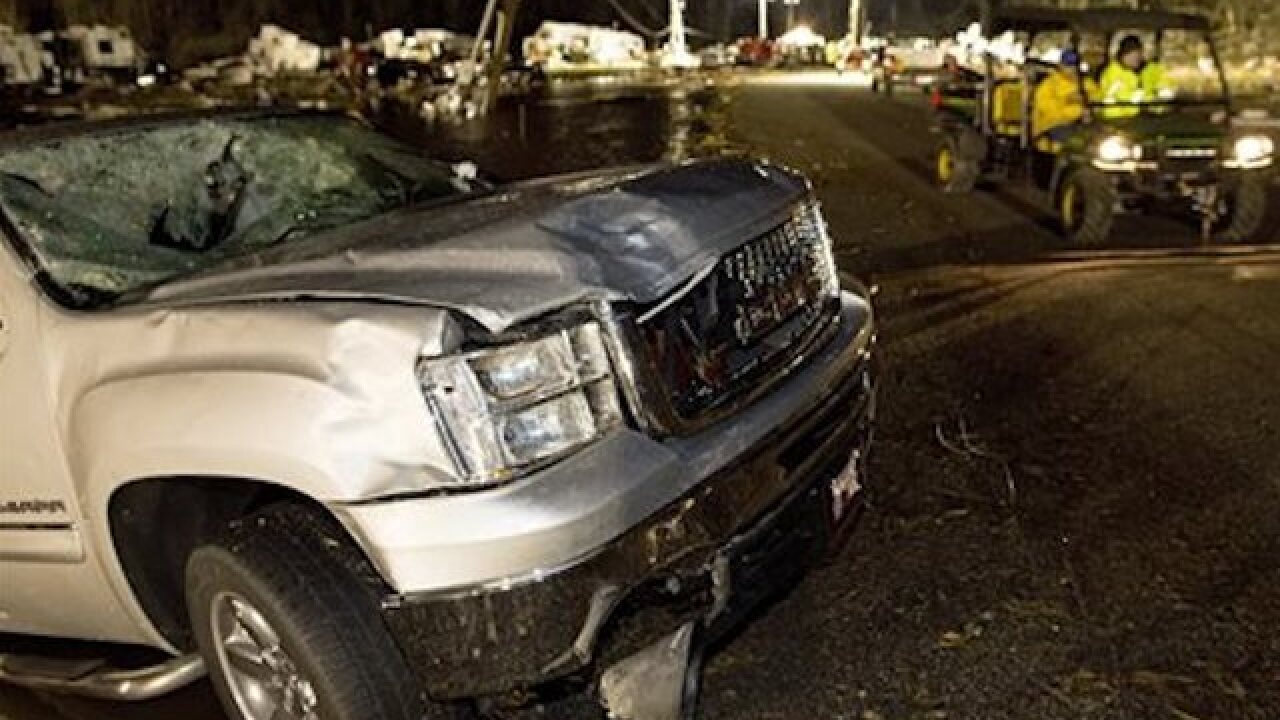 The Tuesday storms mangled trailers at an RV park, ripped roofs from buildings and killed at least three people in Louisiana and Mississippi, authorities said.

One of the hardest-hit areas in the Gulf Coast appeared to be a recreational vehicle park in the town of Convent, in southern Louisiana. Two people were killed there, said St. James Parish Sheriff Willy Martin, speaking on local television. Authorities were working into the early morning to look for people possibly trapped under the debris, Martin said.

Thirty-one people were taken to area hospitals and seven of them were in critical condition, he said.

"We never had anything like this; we never had this many people injured in one event, and so much destruction in one event," Martin told WVUE news. "We won't stop searching until we're satisfied we've searched every pile."

Jerome Picou, who lives near the park, said just before the tornado hit that it was raining and the skies grew dark. Then he heard what sounded like a freight train.

"The wind was blowing a little bit, but then it stopped. Then all of a sudden all kinds of wind and rain started. It was so bad, I had to go inside the house or I would have been blown away with it," Picou said.

In Alabama and Georgia, forecasters issued flash flood watches ahead of the storm system, which was expected to drop 1 to 2 inches of rain. The warnings were expected to be in effect through Wednesday afternoon. The northern part of Georgia was also under a wind advisory.

The Wednesday forecast for the Carolinas calls for possible flash flooding and severe thunderstorms, including damaging winds, hail and isolated tornadoes.

News outlets in Georgia, South Carolina and Florida reported that schools in those states canceled Wednesday classes ahead of the storm threat.

In Mississippi, officials Tuesday night were sorting through reports of damage to some buildings, but Vann Byrd of the Lamar County Emergency Management Agency said one person died in a mobile home west of Purvis. Lamar County Coroner Cody Creel said that Dale Purvis, 73, died of blunt-force trauma.

The reported tornadoes are part of a line of severe weather and storms that ripped through the region.

That number includes the one in Convent and near Purvis, Mississippi, he said. Teams will be sent out in the morning to document the damage and rate the tornadoes, he said.

The harsh weather even affected the National Weather Service, Graham said. At one point the staff in the Slidell office took shelter because a tornado was nearby, and lightning took out the office's radar, forcing them to use backups, he said.

"We felt the shockwave go through the building," Graham said.

A possible tornado ripped through Pensacola, Florida, on Tuesday evening, destroying an apartment complex and downing trees and power lines.

National Weather Service meteorologist Eric Esbensen in Mobile, Alabama, told The Associated Press a team will survey the damage beginning at sunrise Wednesday to determine whether the storm was a tornado.

Twenty-four units at The Moorings apartment complex were destroyed, the Pensacola News Journal (http://on.pnj.com/1XMegZY) reported. No major injuries were reported.

"The upstairs walls were ripped off and you could see right into the kitchen," he said.

Smith said he heard the storm approaching and ran to the bathroom. He says the door was heaving and he could hear tree limbs beating on it. Residents there were being bused to a nearby shelter operated by the American Red Cross.

A reported tornado caused some damage but no injuries near New Orleans' main airport, while high winds ripped off roofs and downed trees around the greater New Orleans area. Other suspected tornadoes were reported north of Lake Pontchartrain and west of the city in St. Charles, St. John the Baptist and Ascension parishes.

Ronald Myers lives across the street from New Mount Bethel Baptist Church in Kenner, Louisiana, just outside of New Orleans. He recalled the sky darkening and high winds — he believes it was a tornado. He and his wife came outside when they heard the church's alarm go off. High winds sheared the brick and mortar from the rear wall of the church.

"My wife came over to turn the alarm off and she came back home and said, 'Baby, the wall behind the church has done fell down,'" said Myers. He said he struggled to keep his footing in the wind, and it nearly knocked his wife down.