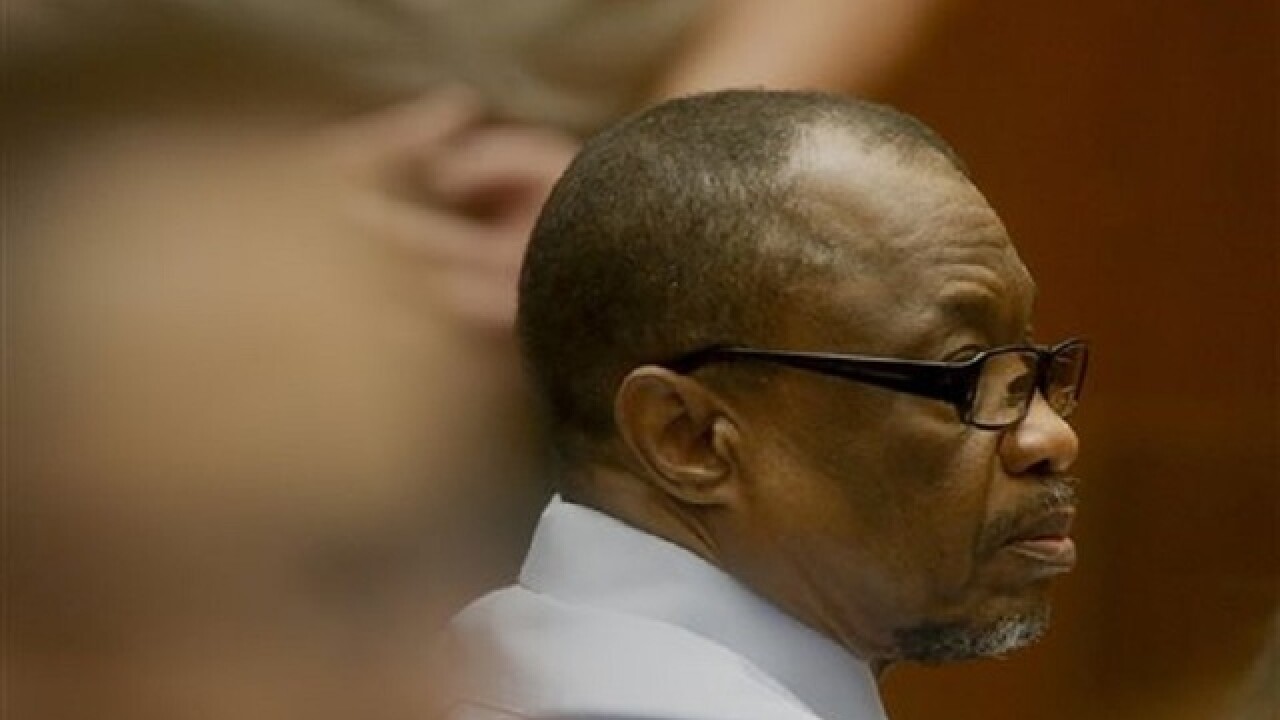 By: Associated Press
Posted at 10:00 PM, May 02, 2016
LOS ANGELES (AP) — The victims were all young black women, some were prostitutes and most had been using cocaine before their bodies were discovered in alleys in a rough part of Los Angeles, hidden in trash bins or covered by mattresses or debris.
For decades, the serial killer dubbed the "Grim Sleeper" eluded police, dumping at least 10 bodies and leaving one woman for dead after shooting her in the chest.
After months of testimony, a prosecutor Monday said that the evidence overwhelmingly points to Lonnie Franklin Jr. and speaks for the vulnerable victims he silenced as he spent years hiding in plain sight.
"How do we figure out what happened here? How do we know who committed these crimes?" Deputy District Attorney Beth Silverman asked as she closed her case in Los Angeles Superior Court.
"Ten of the victims can't tell you themselves. The defendant took their voices when he brutally murdered them. ... The evidence in this case is the voice of the victims."
Franklin, 63, a former garbage collector who also worked as a mechanic for the Los Angeles Police Department, could face the death penalty if convicted of the slayings of a 15-year-old girl and nine young women. He has pleaded not guilty to murder, as well as to attempted murder in the case of the woman who survived.
Defense attorney Seymour Amster said victims had DNA from more than one man on their bodies, and that more than 20 DNA tests excluded his client. Franklin is one of three men to face charges in slayings originally attributed to a single killer called the "Southside Slayer" during the crack cocaine epidemic, when crime spiked.
The killings Franklin is charged with were later dubbed the work of the "Grim Sleeper" because while the first victim was found in 1985 and the last in 2007, there was a 14-year gap when no bodies turned up, although prosecutors believe his violence never ceased.
The most riveting witness was the sole known survivor.
Enietra Washington described being shot in the chest and sexually assaulted in 1988. She noticed her attacker taking a Polaroid picture of her as she slipped into unconsciousness.
When Franklin was finally arrested 22 years later, the same photograph — showing the wounded woman slouched over in a car — was one of many pictures found in his house. When his arrest was announced six years ago, authorities displayed dozens of photos of black women and appealed for the public's help in identifying them. This trial has been focused on 11 victims, but police suspect there were more.
Silverman said Franklin was connected to all 11 victims through ballistics or DNA evidence. She also pointed out the similarities: Most were shot in the left side of the chest with a .25 caliber pistol, or strangled.
Their bodies were all found in alleys, where they were dumped in bushes or dumpsters or hidden under mattresses. Franklin targeted women who were "willing to sell their bodies and their souls in order to gratify their dependency on this powerful drug," Silverman said earlier.
Family members wept, and some doubled over to avoid looking as photos of partly naked and decomposing bodies were shown to the jury on a big screen.
Franklin, wearing black-framed glasses and a blue dress shirt, stared straight ahead in court, showing no emotion during all-day arguments that continue Tuesday.
The body of Janecia Peters, the final victim, was found in a fetal position in a trash bin, her red nails visible through a hole in a garbage bag that was discovered by someone rifling through the trash. Franklin's DNA was found on a zip tie securing the bag.
Twenty years earlier and only a block away, another victim, Bernita Sparks, was found.
"Is that merely another coincidence?" said Silverman, who described the agonizing way Peters had been strangled for two to three minutes after suffering a paralyzing shot in the back.
Franklin was finally arrested in 2010 after a police officer posed as a pizza parlor bus boy to collect DNA samples from dishes and utensils he used at a birthday party.
Amster said in his closing that prosecutors had built a circumstantial case using inferior science and patterns that were nothing more than illusions. He said Franklin was obsessed with sex and could have spread his DNA to the breasts of murder victims because he often gave women bras and other garments.
"His DNA is probably on more women out there than we'll ever know," Amster said, noting it wasn't a morality case.
Amster compared government work in the case to a rancher who calls himself a marksman after drawing bullseyes around bullet holes in his barn.
Associated Press 2016