Suspect backed out of being Paris bombing 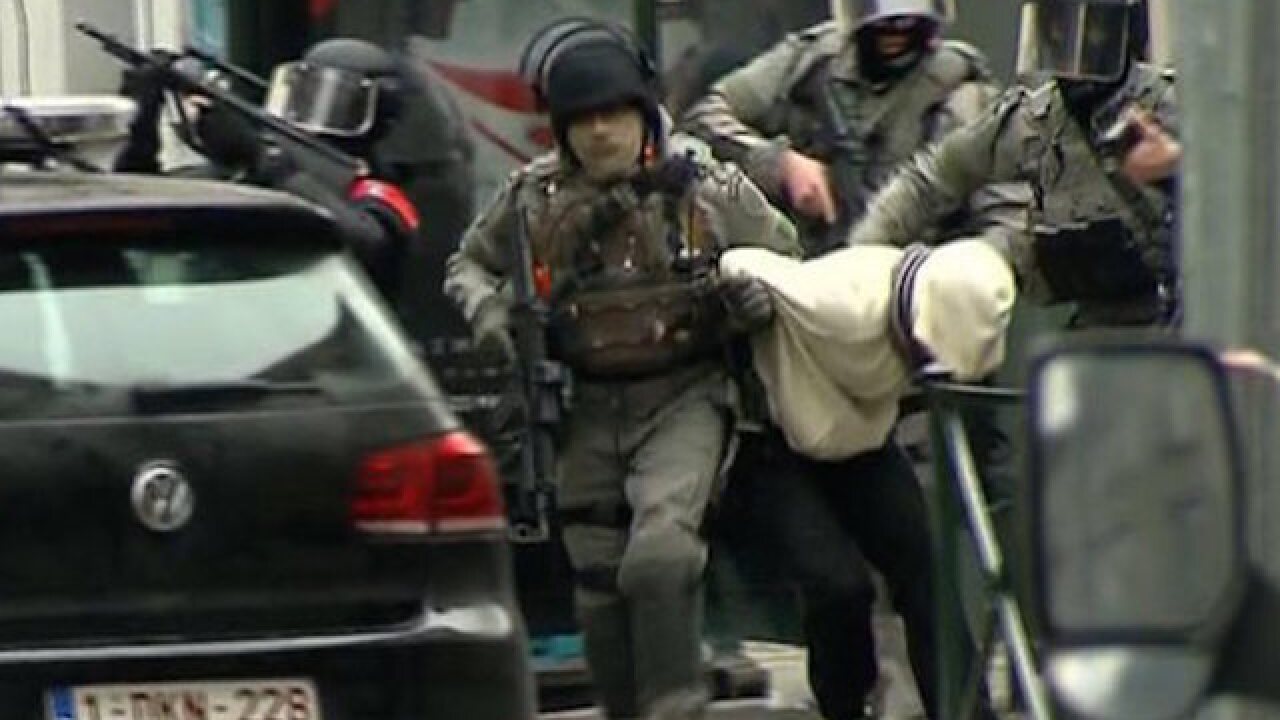 Copyright Associated Press
Uncredited
<p>In this framegrab taken from VTM, armed police officers escort Salah Abdeslam to a police vehicle during a raid in the Molenbeek neighborhood of Brussels, Belgium, Friday March 18, 2016. The identity of Salah Abdeslam is confirmed Saturday March 19, 2016, by French police and deputy mayor of Molenbeek, Ahmed El Khannouss quoting official Belgium police sources. After an intense four-month manhunt across Europe and beyond, police on Friday captured Salah Abdeslam, the top suspect in last year's deadly Paris attacks, in the same Brussels neighborhood where he grew up. (VTM via AP) BELGIUM OUT</p>

BRUSSELS (AP) — After a bullet in the leg ended his four-month flight from the law, Salah Abdeslam started a legal fight Saturday against his extradition from Belgium to France, where the president and the families of 130 victims want the top suspect in the Paris attacks to stand trial.

In Paris, prosecutor Francois Molins said during an interrogation session on Saturday that Abdeslam told Belgian officials that he had "wanted to blow himself up at the Stade de France" on Nov. 13 but that he backed out at the last minute. Molins did not say what caused the 26-year-old purportedly to change his mind.

Abdeslam was shot Friday along with a suspected accomplice when they were captured by Belgian police during a massive anti-terror raid in Brussels. He was found at an apartment a mere 500 meters (yards) from his parents' home, where he grew up.

On Saturday, he was discharged from the St. Pierre hospital in Brussels, questioned by authorities lying down because of his gunshot wound, and then officially charged with "participation in terrorist murder" in the Nov. 13 Paris attacks. France quickly issued a new European arrest warrant with more charges to speed up his extradition to a June 18 deadline.

Lawyer Sven Mary said since there was a criminal investigation in Brussels, "we don't need him in France. We need him in Belgium." He said any hasty extradition would be motivated by a sense of guilt since the attacks were prepared and coordinated in Belgium and several attackers came from Brussels.

"Perhaps we should tone down our groveling to compensate for the sense of guilt we feel toward France," Mary said after he and Abdeslam met with a Belgian investigating magistrate.

Abdeslam's capture in the Brussels neighborhood of Molenbeek after four months on the run brought relief to people who have seen his "wanted" poster all over the two European countries for months.

Hollande warned that more arrests will come as authorities try to dismantle a network involved in the attacks that they now say is much larger than originally suspected. The Islamic State group had claimed responsibility for the Paris carnage.

Belgium's prime minister also said "the fight is not over."

Molins, the Paris prosecutor, said Abdeslam is suspected not only of being a "key actor in the action" last November in the French capital but also of the logistical planning for the deadly attacks. He said French authorities suspect him of bringing numerous "terrorists" to Europe in the months leading up to the attacks and conducting multiples trips around Europe.

Investigators believe Abdeslam drove a car carrying gunmen who took part in the Nov. 13 shootings, rented rooms for them and shopped for detonators. Most of the Paris attackers died on the night of the attacks, including Abdeslam's brother Brahim, who blew himself up.

Abdeslam will appear before a pretrial court on Wednesday, which will decide whether he stays in jail for up to another month.

"If he starts talking, then I presume it will mean he stays longer in Belgium," Belgian federal prosecutor Eric Van der Sypt told The Associated Press.

A 2002 agreement among European Union nations speeds up the extradition process — and for especially grave crimes such as terrorist acts the procedure goes even faster.

Belgian Prime Minister Charles Michel told a news conference that his government has no "political objections" to handing Abdeslam over to the French, but wants to fully respect Belgian judicial procedures.

Belgian prosecutors said they were not sure of the identity of the presumed accomplice arrested with Abdeslam and also charged with "terrorist murder." They said he is believed to have used fake Syrian and Belgian documents in two different names.

Meanwhile, two others detained with Abdeslam were released on Saturday, while a third was charged with belonging to a terror group and hiding criminals.

Two other people believed linked to the Paris attacks are still being sought, including fellow Molenbeek resident Mohamed Abrini and a man known under the alias of Soufiane Kayal.

"Apart from his (medical) condition, I don't see what might delay his extradition," she told the AP.

After the bloodbath, Abdeslam evaded a huge French dragnet to return to Brussels. He was believed to have slipped through police fingers multiple times despite an international manhunt. At one point, Belgian authorities locked down their capital for several days in November but failed to find him.