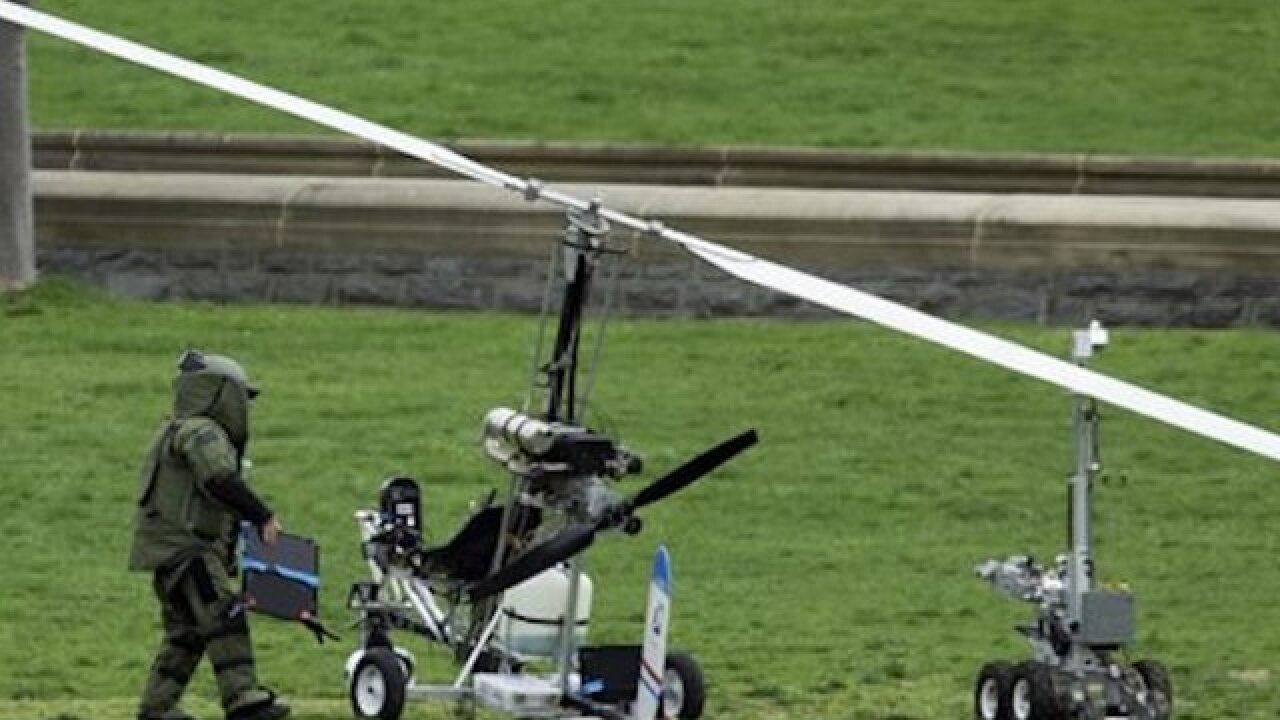 Copyright Associated Press
Manuel Balce Ceneta
<p>In this April 15, 2015 file photo, a member of a bomb squad checks a small helicopter after a man landed on the West Lawn of the Capitol in Washington. Prosecutors say Douglas Hughes, a Florida man who landed the gyrocopter outside the U.S. Capitol as political protest last spring was seconds away from potentially colliding with a Delta flight that had taken off from Reagan National Airport. (AP Photo/Manuel Balce Ceneta, File)</p>

A Florida man who flew a small gyrocopter through protected Washington airspace before landing outside the U.S. Capitol last spring was seconds away from colliding with a Delta flight that had taken off from Reagan National Airport, prosecutors said.

Hughes, who agreed to a plea deal in November, is set to be sentenced April 13. Prosecutors are asking for 10 months in prison, arguing the former mail carrier from Ruskin, Florida, put countless lives at risk.

Hughes' attorneys say they don't think he should have to serve any more time behind bars, noting that no one was injured and no property was damaged. Hughes spent one night in jail after the stunt, served five weeks in home confinement and had this travel privileges restricted for nearly a year, his attorneys said.

Mark Goldstone, one of Hughes' attorneys, said Saturday that he couldn't immediately comment on the government's claim about the Delta flight.

Hughes pleaded guilty in November to a felony of operating a gyrocopter without a license. The charge carries a potential three years in prison, but prosecutors agreed not to ask for more than 10 months in prison as part of a plea deal.

Hughes has said he was trying to send a political message about the need for stronger campaign finance restrictions by flying the aircraft to Washington after taking off from Gettysburg, Pennsylvania. He told investigators during an interview after he was arrested that the only way he potentially put lives in danger was if "authorities overreacted" and tried to shoot him down.

Hughes' attorneys argue that while Hughes broke the law, prosecutors should not respond in a way that discourages Americans from expressing their grievances about their government.

"Suppressing or even discouraging political dissidence is a very dangerous and undemocratic prospect," his attorneys wrote.

Prosecutors said Capitol Police officers were in position to shoot Hughes when he landed and that one of the officers had him in his gunsight with a round in the chamber. They noted that Hughes' flight took him less than a mile from Vice President Joe Biden's home, about 175 feet from the Washington Monument and close to other landmarks.

They say prison time is necessary to deter such action in the future.

"Whether the next airspace violator is an unpopular religious extremist who wants to impact US foreign policy or a popular advocate on any issue of domestic policy, the deterrent message must be clear: If you violate the airspace of our nation's capital — regardless of your message — you will be punished because of the substantial risks to safety and national security," prosecutors wrote.

Hughes' attorneys say he has pledged that he will comply with the law from now on as he continues his push for political change. Hughes has said he plans to challenge South Florida Rep. Debbie Wasserman Schultz for her 23rd Congressional District seat.