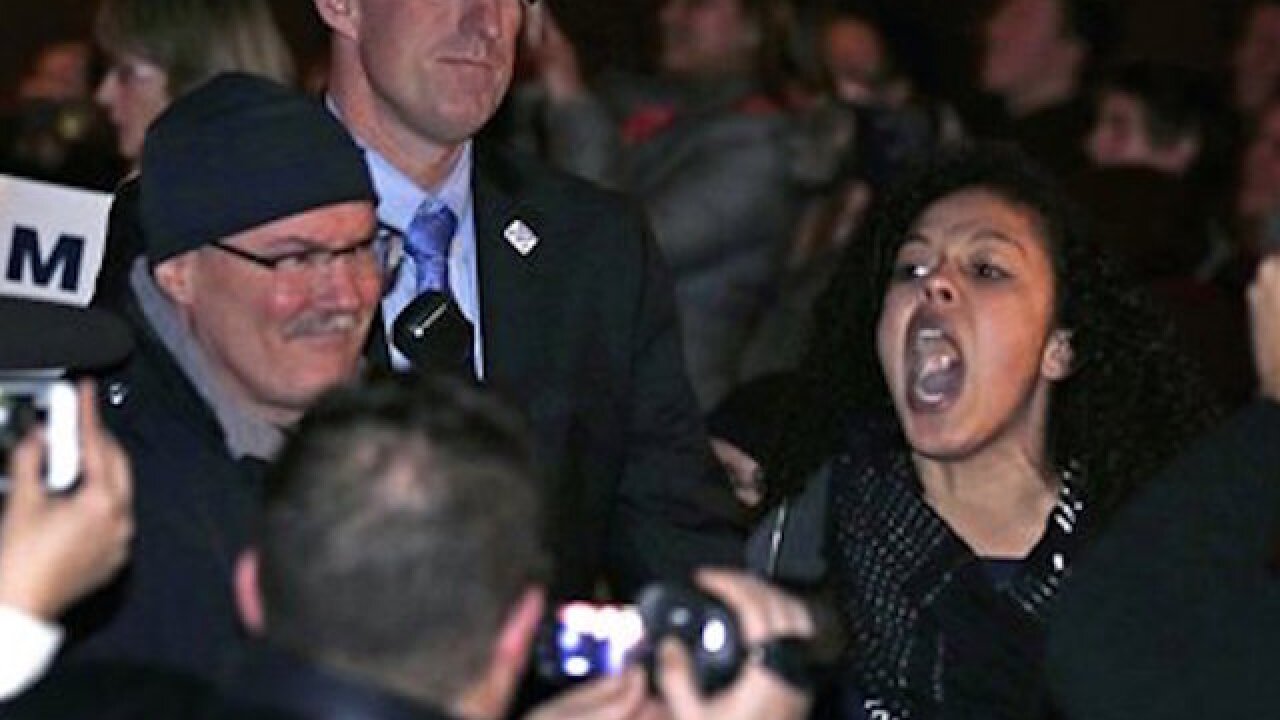 Copyright Associated Press
Charles Krupa
<p>A protestor yells as she is escorted by security out of the audience during an address by Republican presidential candidate Donald Trump at a campaign stop at the Flynn Center of the Performing Arts in Burlington, Vt., Thursday, Jan. 7, 2016. (AP Photo/Charles Krupa)</p>

BURLINGTON, Vt. (AP) — A rally for Republican presidential candidate Donald Trump in Vermont on Thursday was disrupted repeatedly by protesters despite attempts by Trump's staff to screen the crowd.

Meanwhile, supporters and opponents of the billionaire developer faced off outside the Burlington theater where Trump's campaign had invited thousands more people than could fit inside.

Meanwhile, a much different scene at the Trump rally tonight in Burlington, Vermont pic.twitter.com/7sXpV4ahYf

To limit the crowd, rally-goers with tickets in hand were asked as they entered whether or not they supported Trump. Those who said they didn't were escorted out of the building.

"We have more than 20,000 people that showed up for 1,400 spots. I'm taking care of my people, not people who don't want to vote for me or are undecided. They are loyal to me and I am loyal to them," Trump said in a statement released by his campaign.

Adam Linnebur of South Burlington, Vermont, said he was about to enter the event when he was asked whether he was going to vote for Trump. When he said he didn't know, he was asked to leave.

Linnebur, a supporter of Democratic presidential candidate Bernie Sanders, said there was nothing on his ticket that said he had to be a Trump voter.

More than 20,000 free tickets were distributed for the event in the Flynn Center for the Performing Arts, which has only 1,400 seats, according to police, who had warned about the potential impact.

People began lining up at dawn to attend the event, held just a few feet from the City Hall where Vermont Sen. Bernie Sanders, a Democratic presidential candidate, got his start as mayor.

More than 100 people were already in line by midday with over seven hours to go before the event. By the time the doors opened at 5 p.m., the line snaked on for blocks in this liberal bastion inside a staunchly Democratic state.

"I think that it's pretty awesome that he's coming into Bernie country to speak to those of us that do exist and so support him up here," she said.

Nate Brooks said he left his home in the upper Connecticut River Valley town of Bradford at 6 a.m. in time to get in line at 8 a.m.

"I like the way he talks. He's blunt. He's not bought. He pays for himself and I just think it's the right movement to make," Brooks said of Trump. "A lot of us are getting sick of the same old stuff and it's going to be a good change."

McKenzie Kelley, 13, of Bennington took the day off from school and carried a Trump sign while she waited in line with her mother and her social studies teacher.

"I would love to hear him out," McKenzie said. "I stand for about 95 percent of what he is about."

Trump opponents turned out early too. Burlington resident Mark Conrad was first in line, arriving at 4:30 a.m. A staunch Trump critic, he said he'd like to ask the GOP contender why the venue was booked over capacity.

"I can't stand the guy," Conrad said of Trump. "I don't believe anything he says."

Protesters gathered outside the theater during Trump's speech cheered as people were removed from the building.

As people streamed out, some Trump supporters raised their Trump signs in defiance of the protesters.

Chants of "Bernie, Bernie" came from some as the crowd streamed out.