3 dead after historic flooding in Louisiana 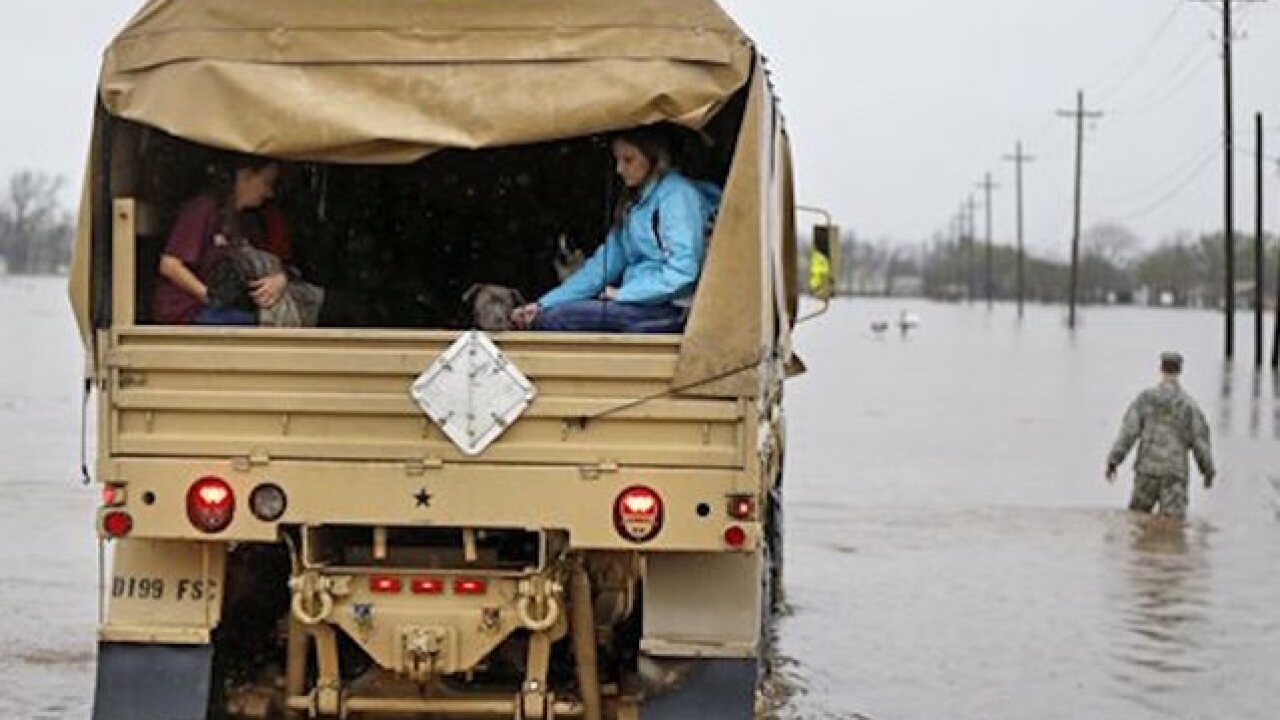 Gerald Herbert
<p>People sit in the back of a Louisiana National Guard truck as they are evacuated from rising floodwaters in Bossier Parish, La., Thursday, March 10, 2016. Thousands had been evacuated by Thursday morning as a second round of rain hit an already inundated northern Louisiana, where flooding in some places was up to the rooftops and in others submerged cars, stranded families. (AP Photo/Gerald Herbert)</p>

ELM GROVE, La. (AP) — Huge military trucks rumbled through neighborhoods in northern Louisiana on Thursday in search of families trapped by days of relentless rain, while men in rain gear waded through floodwaters up to their chests to rescue stranded animals.

The process repeated itself throughout the day and similar rescues were possible later Thursday in the southern part of the state, which also braced for heavy rain.

Davyon Hill, a meteorologist with the National Weather Service's office in Shreveport, said skies have cleared in the region, but the area is not yet out of the woods.

"It's not over with," he said. "There's still part of a low pressure system that's in Central Texas that is moving this way and overnight it will likely bring another bout of rain to the region."

State officials said a 6-year-old girl was among three people killed in Louisiana during two days of severe weather that has left roads covered in water and sent more than 1,000 people fleeing their homes.

Docia Winters hugged her 20-year-old son, Ryan Ficca, when he got off the back of a big truck Thursday morning. She said she and her husband and daughter evacuated their trailer on Wednesday, but Ficca had stayed behind to look after their 11 cats.

She said the water rose so fast, however, that Ficca was forced to leave without the cats.

"We don't know if they went under the trailer or where they are," she said.

Sixteen Louisiana parishes have declared a state of emergency, and the National Guard was sent in to help.

Guard spokesman Rebekah Malone said the Guard has evacuated 361 people from homes in Bossier, Ouachita and Morehouse parishes since Wednesday morning, using trucks that can travel though water 20 to 30 inches deep.

Guardsmen have also evacuated 70 dogs, 16 chickens and even a guinea pig.

In Bossier City — across the Red River from Shreveport — some 3,500 homes were under a mandatory evacuation as a precaution because a bayou was approaching the top of its levee. National Weather Service meteorologist Jason Hansford said Thursday morning that the bayou may top the levee or be breached. One weather spotter just north of Monroe reported more than 18 inches of rain since Tuesday night, he said.

Dozens of people were at a Red Cross shelter at the Bossier Civic Center in northwest Louisiana, said shelter manager Colleen Morgan.

Authorities were using high-water vehicles to bring out about 1,000 people. Rescuers were working out of a staging area along Highway 71 in Bossier Parish on Thursday. Using boats and trucks high enough to drive through the water, they went through the community evacuating people from their homes.

Many residents brought with them dogs and cats as they fled. Two men could be seen in knee-deep water trying to secure horses in the muddy brown waters.

In southern Arkansas, heavy rainfall prompted the closure of some schools and roads, and forecasters say the deluge will continue there for the rest of the week. Meteorologists with the National Weather Service say officials have reported water rescues and evacuations near Dermott, Arkansas, as water rises in low-lying areas. More than 14 inches of rain had fallen as of Thursday morning in Chicot and Ashley counties in the southeast corner of Arkansas.

In West Tennessee, schools shut down early and roads were closed Thursday due to flooding caused by heavy rain throughout West Tennessee.

The National Weather Service says 3 to 10 inches of rain has fallen in counties along the Mississippi River in West Tennessee, eastern Arkansas and north Mississippi since late Tuesday, flooding roads, parking lots and fields. The flood threat is expected to continue into Friday, as another 1 to 3 inches of rain could fall in the Mississippi Delta region, meteorologist Scott McNeil said.

The state emergency management agency in Mississippi says about 100 people have been evacuated in the Delta as a result of severe weather.

One weather-related drowning was reported in both Oklahoma and Texas earlier this week.

In Louisiana, officials late Wednesday said a 63-year-old man died when a car was swept off a flooded road. Mike Steele, a spokesman for the Governor's Office of Homeland Security and Emergency Preparedness, said a 22-year-old man and a 6-year-old girl in Ouachita Parish have also been confirmed dead.