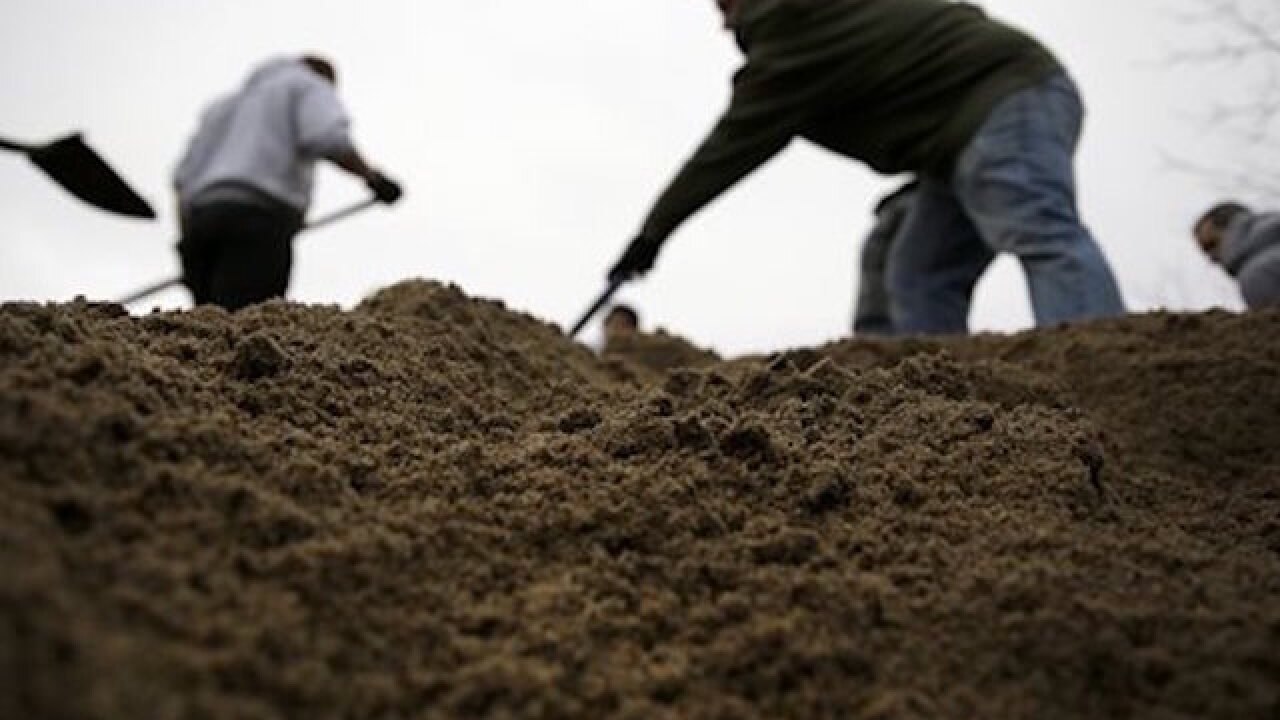 Jeff Roberson
<p>Volunteers use shovels atop a pile of sand as they help fill sandbags Tuesday, Dec. 29, 2015, in St. Louis. Flooding across Missouri has forced the closure of hundreds of roads and threatened homes. (AP Photo/Jeff Roberson)</p>

Torrential rains over the past several days pushed already swollen rivers and streams to virtually unheard-of heights in parts of Missouri and Illinois. Record flooding was projected at some Mississippi River towns, and the Meramec River near St. Louis was expected to get to more than 3 feet above the previous record by late this week.

At least 18 deaths in Missouri and Illinois are blamed on flooding, mostly involving vehicles that drove onto swamped roadways.

The river on Tuesday spilled over the top of the levee at West Alton, Missouri, about 20 miles north of St. Louis. Mayor William Richter ordered any of the town's approximate 520 residents who had not already evacuated to get out of harm's way.

In another eastern Missouri town, Union, water from the normally docile Bourbeuse River reached the roofs of a McDonald's, QuikTrip and several other businesses. The river reached an all-time high Tuesday, nearly 20 feet above flood stage.

RELATED: SnowCast tells how much snow will fall at your location

Interstate 44 was closed near the central Missouri town of Rolla, and a section of Interstate 70 was shut down in southern Illinois. Hundreds of smaller roads and highways were also closed across the two states, and flood warnings were in effect.

In St. Louis, more than 100 volunteers turned out in blustery, cold conditions to fill sandbags where a flooded waterway threatened hundreds of homes.

The River Des Peres is a man-made storm sewer channel that flows through south St. Louis into the Mississippi River, a few miles south of the Anheuser-Busch brewery. The channel is deep enough that flooding isn't a concern under normal conditions.

But there is nothing normal about this December flood.

The Mississippi River is expected to reach nearly 15 feet above flood stage on Thursday at St. Louis, which would be the second-worst flood on record, behind only the devastating 1993 flood.

Maureen Hooch, 57, was among the volunteers at that 1993 flood, and she was out again Tuesday, this time under far different circumstances.

"The last time I was out here it was 1,000 degrees," Hooch recalled. "They had a bus you could get on to cool off. I prefer the cold. When you work, you warm up."

Alderman Larry Arnowitz said up to 500 homes could be threatened if the River Des Peres rises much more than projected. He was confident that with no rain in the forecast for the next several days — and with the help of the thousands of sandbags — everything would be OK.

But Lisa Muxo, 45, said her basement was already taking on water.

"These are our neighbors, our friends," said Muxo, who brought her teenage son and three of his friends to help sandbag. "We need to help each other."

The high water was blamed on the shutdown of a wastewater treatment plant on Monday just south of St. Louis, causing sewage to go directly into nearby rivers and streams. The Metropolitan Sewer District of St. Louis said the Fenton wastewater treatment plant, which is designed for 6.75 million gallons per day of flow, was treating nearly 24 million gallons per day at the time of the malfunction.

One of the two wastewater plants in Springfield, Missouri, also failed, allowing partially treated sewage to flow into a river.

The U.S. Coast Guard closed a 5-mile portion of the Mississippi River near St. Louis due to flooding. Capt. Martin Malloy cited high water levels and fast currents in the river, which is a vital transportation hub for barges that carry agricultural products and other goods.

In central and southern Illinois, flood warnings were in effect a day after a winter storm brought sleet and icy rain. Major flooding was occurring along the Kankakee, Illinois, Sangamon and Vermilion rivers.

An Illinois prison with nearly 3,700 inmates was preparing for possible flooding from the Mississippi River on Tuesday. Illinois Department of Corrections spokeswoman Nicole Wilson says that employees and emergency work crews at the Menard Correctional Center near Chester are filling sandbags and "working around the clock."

The maximum security prison is on lockdown, and visits have been suspended. Officials also anticipate having to bring in hundreds of portable toilets in case the prison's water service is shut down.

In Granite City, Illinois, about 30 residents of a flooded trailer park idled in a Red Cross emergency shelter in a church basement. The park's property manager told Shirley Clark, 56, and other displaced residents that it could be another 10 to 12 days before they're able to return to their homes.

"We need help over here," said Clark, a diabetic who said she left behind her insulin supply. "We're just holding on."

The Midwest wasn't alone. Heavy rain continued in parts of the South, such as Georgia and eastern Alabama, which has in parts seen more than 14 inches of rain since Dec. 21.