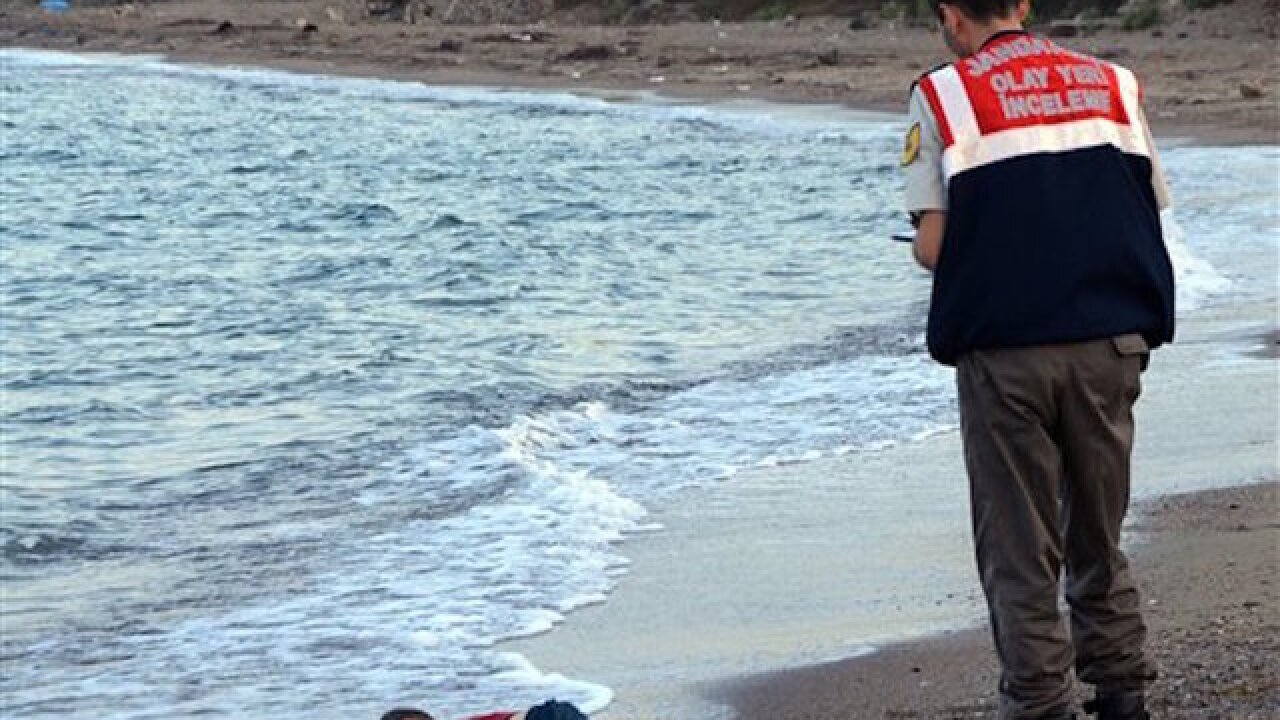 Copyright 2018 Scripps Media, Inc. All rights reserved. This material may not be published, broadcast, rewritten, or redistributed.
Nilufer Demir
FILE - A paramilitary police officer investigates the scene before carrying the lifeless body of 3-year-old Aylan Kurdi from the sea shore, near the beach resort of Bodrum, Turkey, early Wednesday, Sept. 2, 2015. A number of migrants are known to have died and some are still reported missing, after boats carrying them to the Greek island of Kos capsized. (AP Photo/Nilufer Demir, DHA,Nilufer Demir, File) TURKEY OUT - MANDATORY CREDIT

VANCOUVER, British Columbia (AP) — Relatives of a Syrian boy whose lifeless body washed up on a Turkish beach, sparking worldwide concern for the refugee crisis, have landed in Canada.

Mohammed Kurdi, his wife and their five children arrived in Canada as refugees on Monday, sponsored by Mohammed's sister Tima Kurdi, who wiped away tears as she greeted her relatives at Vancouver airport's arrival gates.

Speaking through his sister, who translated from Arabic, Mohammed Kurdi thanked Canadians and the government for making his dream come true.

"I'm happy! Very happy!" he said in English to a crowd of reporters gathered around the family.

His teenage son Shergo said he was looking forward to going back to school and starting a new life.

The reunion comes at the end of a difficult year for the family.

Tima and Mohammed's three-year-old nephew, Alan Kurdi, drowned along with his five-year-old brother and their mother while crossing the waters between Turkey and Greece in September.

The boy's father Abdullah Kurdi said after the tragedy that the family was trying to get to Canada to join his sister Tima. Abdullah has since declined to come to Canada. He lives in Iraq's Kurdistan region. Tima said she wished Abdullah was in Canada. "All of us here wish you were here with us," Tima said when asked if she had a message for him.

Mohammed Kurdi has been in Germany since leaving his family in Turkey seven months ago to find work. He had yet to meet his youngest child, who was born in July, but the family reunited in Frankfurt before flying to Canada.

The Kurdis are among 25,000 Syrian refugees the Canadian government has pledged to welcome by the end of February. Immigration Minister John McCallum said last week the government will likely not meet its target of having 10,000 of them on Canadian soil by Jan. 1. The federal website that updates progress listed 2,413 refugees as having arrived in Canada by Dec. 26.

Mohammed Kurdi, his wife and children will all stay with Tima Kurdi and her family for now. The brother and sister are planning to work together at Tima Kurdi's new hair salon in Port Coquitlam, British Columbia, Kurdi Hair Design.

"Thank you Canadian people. Thank you Prime Minister Trudeau for opening the door and showing the world how everyone should welcome refugees and save lives," Tima Kurdi said.