Another suspect possible in Brussels attacks 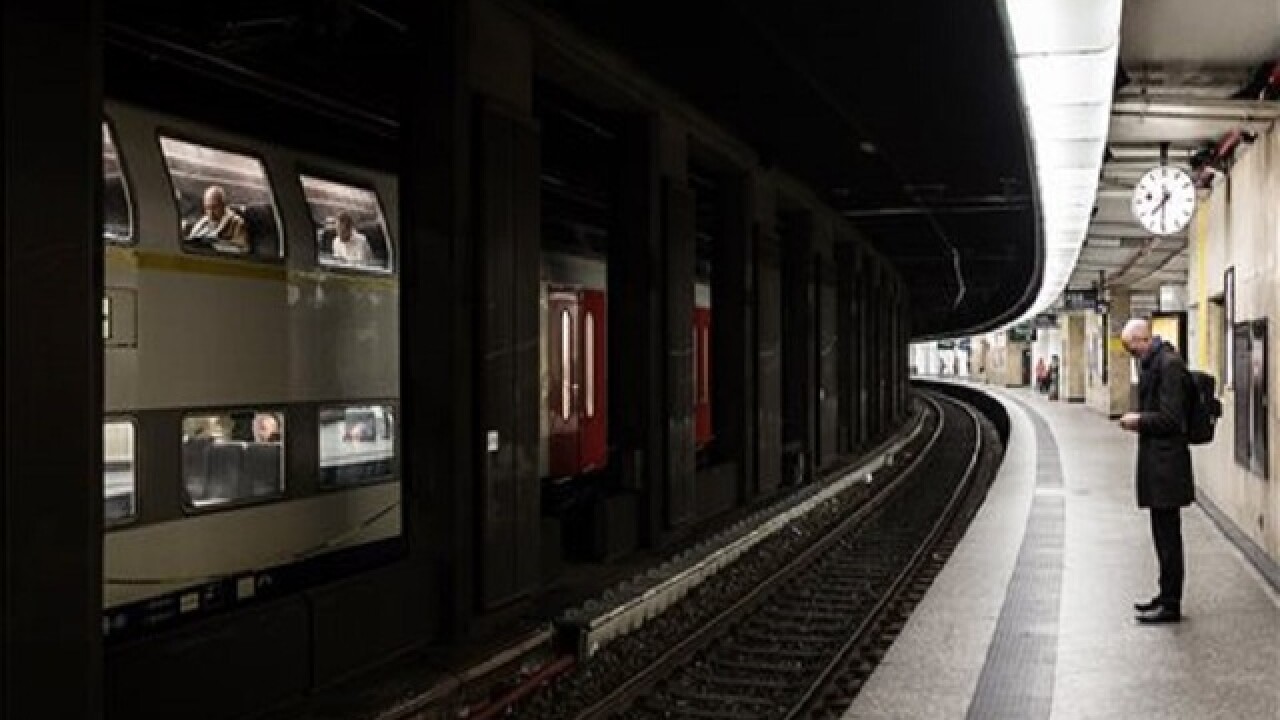 Valentin Bianchi
<p>A man waits on an empty train platform at the Central Station in Brussels on Wednesday, March 23, 2016. Belgian authorities were searching Wednesday for a top suspect in the country's deadliest attacks in decades, as the European Union's capital awoke under guard and with limited public transport after 34 were killed in bombings on the Brussels airport and a subway station. (AP Photo/Valentin Bianchi)</p>

By: Associated Press
Posted at 4:12 AM, Mar 24, 2016
BRUSSELS (AP) — A second attacker is suspected of taking part in the bombing this week of a Brussels subway train and may be at large, according to Belgian and French media reports, amid signs that the same Islamic State network was behind the attacks in Brussels and bloodshed in Paris last year.

The chief suspect in the Paris attacks, Salah Abdeslam, was summoned to court in Brussels on Thursday morning after his arrest last week in the Belgian capital. His lawyer, who had initially vowed to fight extradition, said Abdeslam now wants to be sent to France as soon as possible.

The Islamic State group claimed responsibility for the attacks in both Brussels and Paris, which have laid bare European security failings and prompted calls for better intelligence cooperation and a tougher response to Islamic State extremists.

Belgian prosecutors have said at least four people were involved in Tuesday's attacks on the Brussels airport and a subway train, including brothers Ibrahim and Khalid El Bakraoui, identified as suicide bombers. European security officials identified another suicide bomber as Najim Laachraoui, a suspected bombmaker for the Paris attacks.

Prosecutors have said another suspected participant in the airport attack is at large, a man in a hat seen in surveillance images who has not been publicly identified. Belgian state broadcaster RTBF and France's Le Monde and BFM television reported Thursday that a fifth attacker may also be at large: a man filmed by surveillance cameras in the Brussels metro on Tuesday carrying a large bag alongside Khalid El Bakraoui. RTBF said it is not clear whether that man was killed in the attack.

Prosecutors, who have not said how many people overall may have taken part in the bombings, did not respond to the reports.

Turkish President Recep Tayyip Erdogan said on Wednesday that Ibrahim El Bakraoui was caught in June 2015 near Turkey's border with Syria and deported to the Netherlands, with Ankara warning Dutch and Belgian officials that he was a "foreign terrorist fighter." But other Turkish officials said he was released from Dutch custody due to lack of evidence of involvement in extremism.

Attention turned Thursday to Paris attacks suspect Abdeslam, who evaded police in two countries for four months before Friday's capture in the Molenbeek neighborhood where he grew up. He was shot in the leg during his arrest.

The Belgian federal prosecutor's office said in a statement that Abdeslam appeared at a hearing Thursday with a suspected accomplice and the court adjourned the proceedings. Abdeslam's lawyer, Sven Mary, said his client was not physically present for the hearing, even though a helicopter circled overhead, and the area was under extraordinarily heavy security, as are many parts of the Belgian capital.

Mary told reporters at the courthouse that he asked for a one-month delay on any transfer while he studies the large dossier, but that Abdeslam "wants to leave for France as quickly as possible."

"He wants to explain himself in France, so it's a good thing," Mary said. He said the next extradition hearing will be March 31, and he expects the process to take about another two weeks after that.

France is seeking Abdeslam's extradition to face justice for his involvement in the Nov. 13 attacks on a Paris rock concert, stadium and cafes, which killed 130 people. Several attackers were also killed.

Abdeslam, 26, a French citizen who grew up in Brussels' heavily immigrant Molenbeek neighborhood, slipped through police fingers on multiple occasions.

Belgium is holding three days of national mourning. Security remains tight, but barriers were removed around the subway station hit by the attack, Maelbeek. The airport will remain closed until at least Saturday.

Many of the dead remain unidentified, partly because of the severity of devastation caused by the nail-packed bombs detonated in crowds. Eleven people were confirmed dead at the airport, 20 inside the Maelbeek subway station.

The driver of the subway train immediately helped victims despite the horror and fear of the attack — but has insisted he's not a hero. Christian Delhasse is reportedly already back at work, and posted a statement on his Facebook page saying, "I'm a metro driver who did his work in specific circumstances. Any other driver in my place would have done the same thing. The heroes are our firefighters, our forces of order, our army."

He urged respect for "the victims we couldn't pull out."