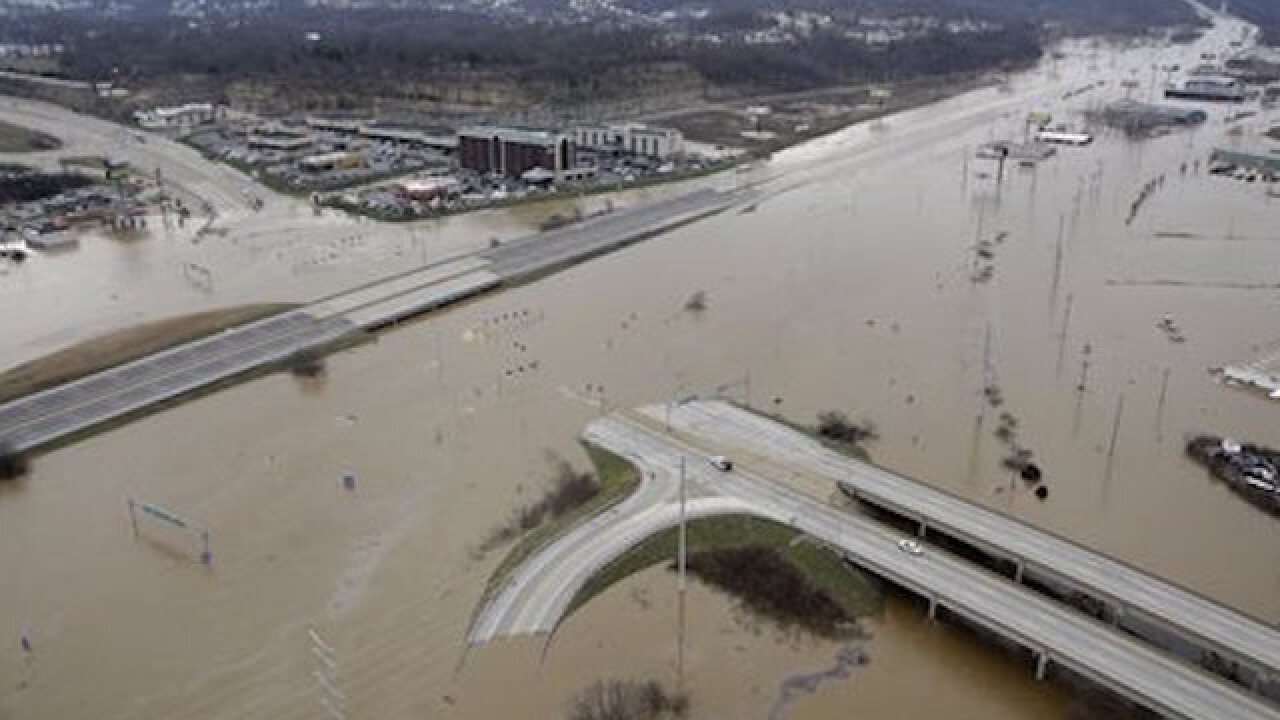 Swollen rivers and streams, already high from a wet late fall, were pushed to heights not seen in nearly a quarter- century after more than 10 inches of rain fell this week in a wide swath from central Illinois through southwest Missouri.

While St. Louis itself was not flooded, hundreds of homes in its southwestern suburbs were damaged and residents in hundreds of others had to leave as water approached the tops of levees. Other spots being threatened were just farmland or now-deserted land.

The good news Thursday: The Missouri, Meramec and Mississippi rivers were cresting throughout the region. The Mississippi River appeared it would be about 7 1/2 feet below the 1993 record in St. Louis, where a floodwall offered solid protection, but as the waters flow south, points in southern Missouri and Illinois were awaiting the crest.

The Meramec River to the southwest of St. Louis reached record levels — 4 feet above the previous record in the suburb of Valley Park — but was starting to recede Thursday. However, there was still cause for grave concern, as hundreds of homes were damaged in Eureka, an estimated 100 homes in Arnold were damaged, as well as dozens more in nearby Pacific.

"There's still water out there — there's water everywhere," MoDOT spokeswoman Marie Elliott said. "We were out there all night sandbagging trying to hold it back as much as we could, but it was just so much."

The only north-south alternative to I-55 was an already-congested local road.

"The other alternates that we would have sent motorists to basically have water on them as well," Elliott said.

Other forms of transportation were equally problematic. Amtrak officials halted the St. Louis-to-Kansas City train on Thursday, and 5-mile stretch of the Mississippi River that was closed at St. Louis halted barge traffic.

At least 20 deaths over several days in Missouri and Illinois were blamed on flooding, mostly involving vehicles that drove onto swamped roadways, and at least two people were still missing in central Illinois on Thursday.

In Eureka, southwest of St. Louis, firefighters and their boats have been in high demand since Tuesday, accounting for roughly four dozen rescues of people in their homes, businesses or vehicles.

"I think you're seeing people who are desperate or impatient, putting themselves in predicaments," said Scott Barthelmass, a Eureka Fire Protection District spokesman.

Nine levees, some on the Mississippi River and others on the Missouri River, had been topped by water, the U.S. Army Corps of Engineers said. Most of those earthen barriers were meant to protect farmland rather than populated areas and one held the Mississippi back from the now-deserted manmade Chouteau Island on the Illinois side.

Nearly a dozen other levees considered at risk for "possible significant distress," were holding Thursday, but people were moving out just in case.

Michael Pennise, mayor of the St. Louis suburb of Valley Park, ordered mandatory evacuations for 350 to 400 homes and dozens of businesses in the section of town near the Meramec River. But the water was receding Thursday, and the levee held.

The southwest Missouri tourist destination of Branson had residents of about 150 duplexes and homes evacuate Wednesday due to flooding from a manmade lake.

And in the historic riverfront city of Alton, Illinois, some downtown business owners scrambled Wednesday to keep out rising water from the Mississippi.

Merchant Tim Meeks loaded vats of gourmet olive oil from his downtown market onto a trailer headed to higher ground as other employees worked to drain a basement filled with 7 feet of standing water.

"We don't keep anything down there anymore," he said. "All of our product has to go."