Rescuers continue to dig out in Taiwan 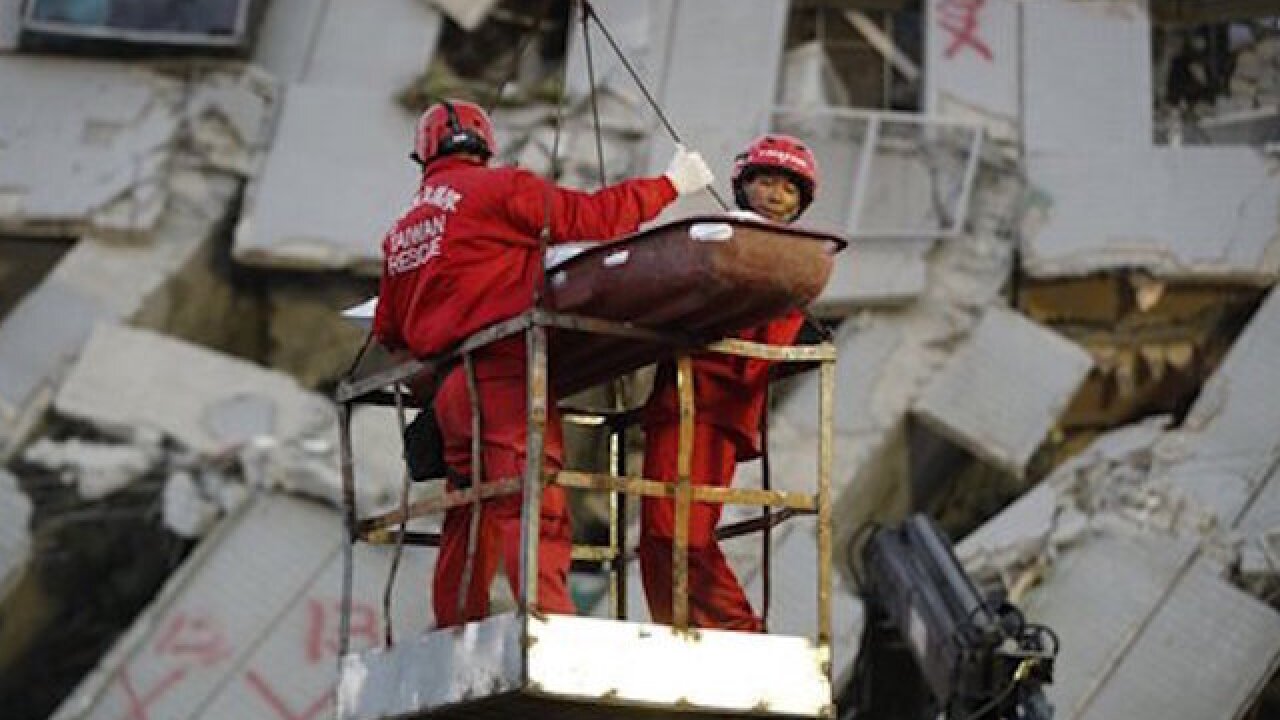 Wally Santana
<p>Two emergency workers carry a victim recovered from a collapsed building in Tainan, Taiwan, Sunday, Feb. 7, 2016. Rescuers on Sunday found signs of live within the remains of a high-rise residential building that collapsed in a powerful, shallow earthquake in southern Taiwan that killed over a dozen people and injured hundreds. (AP Photo/Wally Santana)</p>

TAINAN, Taiwan (AP) — As anxious families waited nearby, rescuers on Sunday painstakingly pulled more survivors from the remains of a high-rise apartment building that collapsed a day earlier in a powerful earthquake that shook southern Taiwan and killed at least 32 people. More than 100 remained buried in the building's rubble.

The government in Tainan, the worst-hit city, said that more than 170 people had been rescued alive from the 17-story building, which folded like an accordion after the quake struck.

Mao Yi-chen, 20, was rescued soon after the magnitude-6.4 quake hit before dawn Saturday, and her older sister Mao Yi-hsuan was pulled out Sunday in serious condition. A rescue worker had handed over a photo album and homemade cards found next to her for her family to collect, said local official Wang Ding-yu.

"He said that 'maybe your home is damaged, but memories of the family can last,'" Wang said.

With the extended Lunar New Year holiday — the most important family holiday in the Chinese calendar — officially beginning on Monday, celebrations were certain to be subdued in Taiwan. Both President Ma Ying-jeou and President-elect Tsai Ing-wen canceled the handing out of envelopes of cash in their hometowns, a holiday tradition for Taiwan's leader.

The Tainan Disaster Emergency Center estimated that 118 people were still trapped at the site of the collapsed building, many at the bottom of the wreckage. Tainan Mayor Lai Ching-te said rescuers were able to reach many people by using information from residents who got out about the possible locations of those still inside.

Two of the trapped, a male and a female at different sides of the building, were talking to rescue workers on Sunday evening, Lai said. He told reporters that rescuers intended to pull them out, and then bring in heavier excavators to remove part of the structure on top to allow access to the areas at the bottom.

The spectacular fall of the high-rise, built in 1989, raised questions about whether its construction had been shoddy. Tainan's government said the building had not been listed as a dangerous structure, and Taiwan's interior minister, Chen Wei-zen, said an investigation would examine whether the developer had cut corners.

Eighth-floor resident Huang Guang-wei was pulled out Sunday morning from a different section from where he lived, showing how distorted the building is, Lai said. Rescuers could see Huang only through a 10-centimeter (4-inch) crack and it took eight hours to get him out, Lai said.

Among the fatalities was a 6-month-old baby girl who was pulled from the rubble and rushed to a hospital, where she was pronounced dead. A deceased man believed to be her father was pulled out 40 minutes later, Wang said.

A man in his 60s, whose son escaped and whose daughter-in-law was in serious condition, was trying to help rescuers pinpoint his grandsons. "My 11- and 12-year-old grandsons are still inside on the ninth floor," said the man, who gave only his surname, Huang. "I told my son not to buy an apartment here; it was suspiciously cheap."

Beside him, another man nodded in agreement as he waited for news of his own relatives on the seventh floor.

The emergency center said that 30 of the 32 confirmed deaths from the earthquake were from the building collapse. It said that 171 people had been rescued from the building, 92 of whom were sent to hospitals. More than 100 people were rescued from other parts of Tainan, eight of whom received hospital treatment. Nine other buildings in the city collapsed and five careened.

On Sunday, thousands of rescuers worked on different levels of the folded building, which was supported by steel pillars. Rescuer Su Yu-min said they were trying to cut through walls and pillars.

"It takes a few hours to complete a search for just one household and sometimes it takes two hours just to go forward 30 centimeters (12 inches)" when the way is blocked by a wall, he said.

Taiwanese broadcaster EBC showed video of volunteers trying to comfort the mother of a missing 20-year-old man, Chen Guan-yu. "He always thinks of me," said the woman, whose name was not given. "He worries about me being single and lonely and that no one is taking care of me."

Earthquakes frequently rattle Taiwan, but most are minor and cause little or no damage, though a magnitude-7.6 quake in central Taiwan in 1999 killed more than 2,300 people.