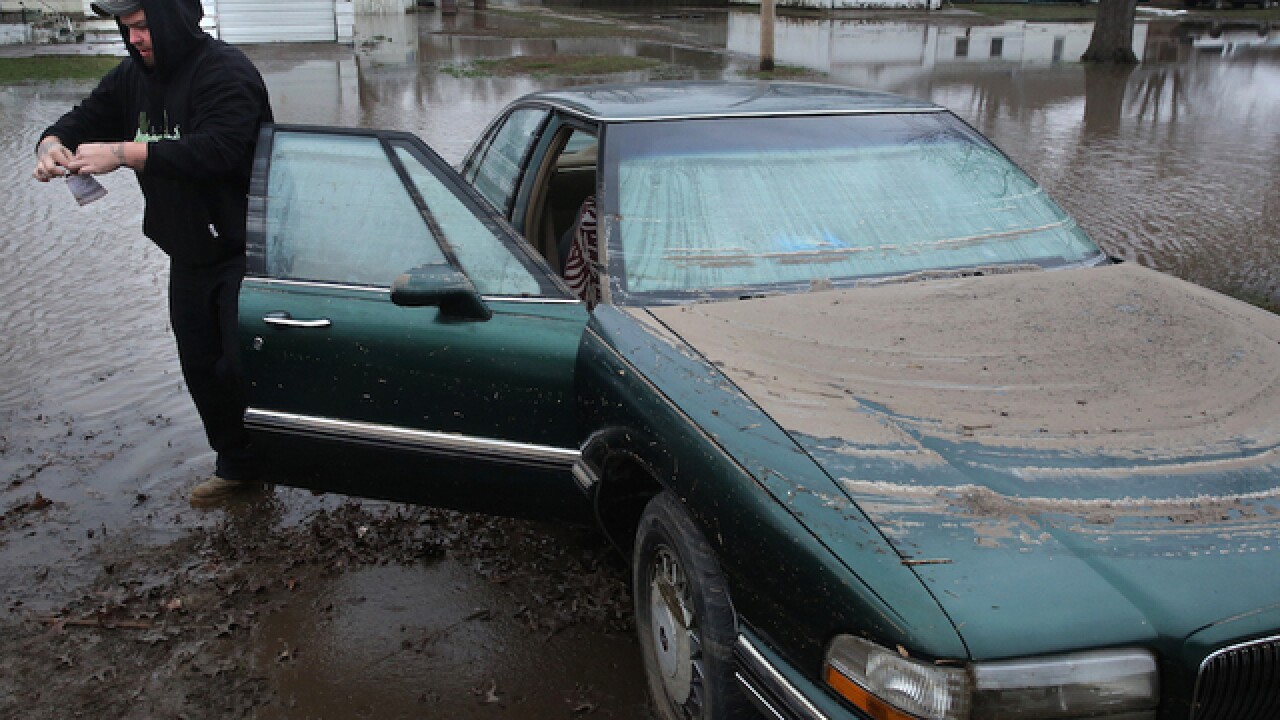 David Spencer
<p>Thomas Barnard removes the registration from fiancee Jessica Klick's 1995 Buick after floodwaters from the South Fork of the Sangamon River receded during a visit to the couple's home in Kincaid, Ill., Thursday, Dec. 31, 2015. The car was almost completely submerged during the flooding. (David Spencer/The State Journal-Register via AP) MANDATORY CREDIT</p>

Water from a rare, record-setting winter flood was receding in the St. Louis area Friday, allowing major roadways to reopen and offering hope for flood-weary residents that the worst of this sudden catastrophe was behind them.

For others, the worst is still to come, with expected crests in coming days in southern Missouri, southern Illinois, then onto Arkansas, Tennessee and other southern states.

But the impact isn't expected to rival what was seen this week in suburban St. Louis. The city itself, protected by a flood wall and a sloping geography that keeps downtown and most homes free from the Mississippi River's wrath, remained mostly dry. The southern suburbs were another story.

Some points along the Meramec River topped the 1993 record by 4 feet, forcing the evacuation of hundreds of homes and businesses in southwest St. Louis suburbs like Pacific, Eureka, Valley Park and Arnold. Several hundred homes took in water, and residents are just beginning to assess the damage.

Two major highways — Interstate 44 and Interstate 55 — reopened Friday south of St. Louis after the Meramec withdrew. MoDOT spokeswoman Shaunda White said 76,000 vehicles pass through the 3-mile segment of I-55 that had been closed on a typical day, "so that's going to be a significant relief."

The devastating flood, fueled by more than 10 inches of rain over a three-day period that began last weekend, is blamed for 20 deaths. Four others are still missing — two teenagers in Illinois and two men in southwest Missouri.

Illinois Gov. Bruce Rauner was slated to visit flood-damaged areas on Friday, planning stops at Alton, Grafton and four other communities. He has declared 12 of the state's central and southwestern counties disaster areas.

About 115 miles southeast of St. Louis, the Mississippi River is expected to top the 1993 record by a foot and a half this weekend in Cape Girardeau, Missouri. Rising water already has damaged about two-dozen homes and is threatening a power substation, though the community of nearly 40,000 residents is mostly protected by a flood wall.

In nearby Allenville, access into the town was cut off and 30 or so homes were mostly dry.

Allenville is frequently flooded, so the inconvenience is old hat to residents there, many of whom were using boats to get around, according to Cape Girardeau County emergency management director Richard Knaup said.

Still, this flood could be different.

"They are used to being isolated and cut off, but with this record height, we're confident some homes will get wet," Knaup said. "We're just not sure how many."

Sandbagging efforts escalated Friday in tiny St. Mary, Missouri, after the breach of a Mississippi River levee. The small levee in Ste. Genevieve County, about 40 miles south of St. Louis, broke Thursday night. The river was expected to crest Saturday, about 3½ feet below the 1993 record.

The levee break mostly impacts agricultural land, but water was approaching the town of about 360 residents. Neighbors and volunteers were placing sandbags around endangered homes. There were no immediate reports of damage.

At least nine other levees — five on the Mississippi River, three on the Missouri and one on Illinois' Kaskaskia River — were topped by water this week, but none protected populated areas.

Ste. Genevieve, a historic French village dating to the 18th century, remained dry thanks to a Mississippi River levee that was being constantly monitored, said Sandra Cabot, the town's director of tourism.

Cairo, Illinois, where the Ohio and Mississippi rivers meet, seemed safe, despite a near-record crest prediction. It appeared the U.S. Army Corps of Engineers would not need to blast a hole in the Birds Point waterway in southeast Missouri, as it did in 2011 to relieve pressure from the flood protection at nearby Cairo.