Rubio, Cruz jostle to be second in line to Trump 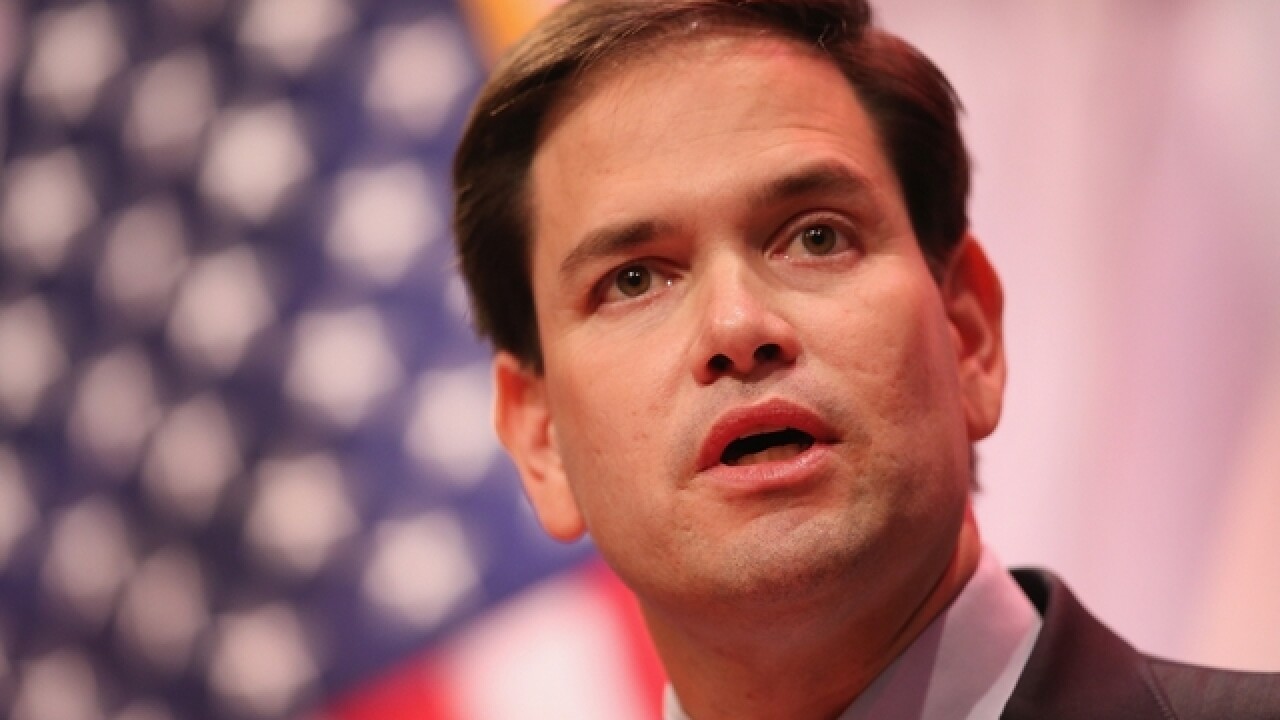 FRANKLIN, Tenn. (AP) — Republicans Marco Rubio and Ted Cruz battled to emerge as the true anti-Trump on Sunday as the billionaire businessman took an ever-so-brief break from his trademark braggadocio to say his drive for the GOP nomination isn't unstoppable — yet.
Fresh off a commanding victory in South Carolina, Donald Trump declined to say the nomination was his to lose. But he quickly went on to declare, "I'm really on my way." Soon enough, in a television interview, he was toting up electoral math all the way through Election Day and concluding, "I'm going to win."
The candidates' diverging flight plans demonstrated how the campaign spreads out and speeds up now. Nevada's GOP caucuses are Tuesday, and then a dozen states vote in the March 1 Super Tuesday bonanza.
Trump was in Georgia exulting over his latest victory, Cruz headed for Nevada, and Rubio embarked on a Tennessee-Arkansas-Nevada trifecta.
On the Democratic side, Hillary Clinton savored her weekend win in the Nevada caucuses as Bernie Sanders acknowledged that while his insurgent campaign has made strides, "at the end of the day ... you need delegates." He looked past Saturday's Democratic primary in South Carolina to list Colorado, Minnesota, Massachusetts and Oklahoma as places where he has a "good shot" to do well.
Rubio and Cruz used the Sunday morning news shows to spin rosy-road-forward scenarios after complete but unofficial returns in South Carolina put Trump way up top, with Rubio squeaking past Cruz for second. But with roughly 70 percent of Republicans in national polls declining to back Trump, Cruz and Rubio tried to cast themselves as the one candidate around whom what Rubio calls the "alternative-to-Donald-Trump vote" can coalesce.
Rubio also took an aggressive run at Trump, faulting him for a lack of specifics on policy.
"If you're running for president of the United States, you can't just tell people you're going to make America great again," he said on CBS' "Face the Nation."
At a later rally in Franklin, Tennessee, a Nashville suburb, Rubio took note of the smaller GOP field after Jeb Bush's departure from the race, and celebrated his biggest crowd of the campaign, estimated at more than 3,000 people. Rubio avoided criticizing his GOP rivals, instead highlighting his efforts to help middle-class families.
Cruz, for his part, stressed his conservative bona fides and said he was the lone "strong conservative in this race who can win. We see conservatives continuing to unite behind our campaign," he told NBC's "Meet the Press."
With Bush gone from the race, Rubio was hoping to pick off past donors to the Bush campaign and looking to benefit as well from a cessation in the millions of dollars in negative ads run by the Bush campaign and its allies.
Rubio also suggested it was only a matter of time before John Kasich and Ben Carson folded as well. He hinted it would be better to get that winnowing over with, saying, "the sooner we can coalesce, the better we're going to be as a party in general."
Not so fast, Kasich countered. "We're getting big crowds everywhere we go," the Ohio governor insisted, listing Vermont, Massachusetts and Virginia as places he can shine.
Cruz tried to brush right past his apparent third-place finish in South Carolina and instead hark back to his victory over Trump in leadoff Iowa.
"It is becoming clearer and clearer that we are the one campaign who can beat Donald Trump," Cruz told reporters before a campaign stop in rural Nevada.
The Texas senator said his path to victory calls for a strong showing on Super Tuesday, and that Texas was "clearly the crown jewel" of that day.
Rubio, a Florida senator, highlighted the big delegate take available in the five-state round of voting on March 15, which includes his home state. He noted that round offers victors a "winner-take-all" share of delegates rather a proportional share.
Cruz scoffed at Rubio's strategy, saying: "They're trying to wait until March 15 to win a state."
Trump suddenly had nice things to say about Bush, the candidate he had hammered so relentlessly when they were rivals. As for Rubio, Trump told "Fox News Sunday" that "I start off liking everybody. Then, all of a sudden, they become mortal enemies."
At a rowdy Atlanta rally, Trump crowed over his big South Carolina win, saying "we're just doing one after another." Spitting out the superlatives, he called his sweep of all 50 delegates there "amazing," ''beautiful," ''conclusive" and "very, very decisive."
Clinton was happy with her Nevada win but acknowledged she has work to do in persuading voters that she has their best interests at heart.
"I think there's an underlying question that maybe is really in the back of people's minds and that is, you know, is she in it for us or is she in it for herself?" Clinton said on CNN. "I think that is a question that people are trying to sort through."
Working to increase his support among black voters, Sanders visited a Baptist church luncheon following services in West Columbia, South Carolina, and talked up the country's economic recovery under President Barack Obama.
Associated Press 2016