Rubio has most cash among rivals to Trump, Cruz 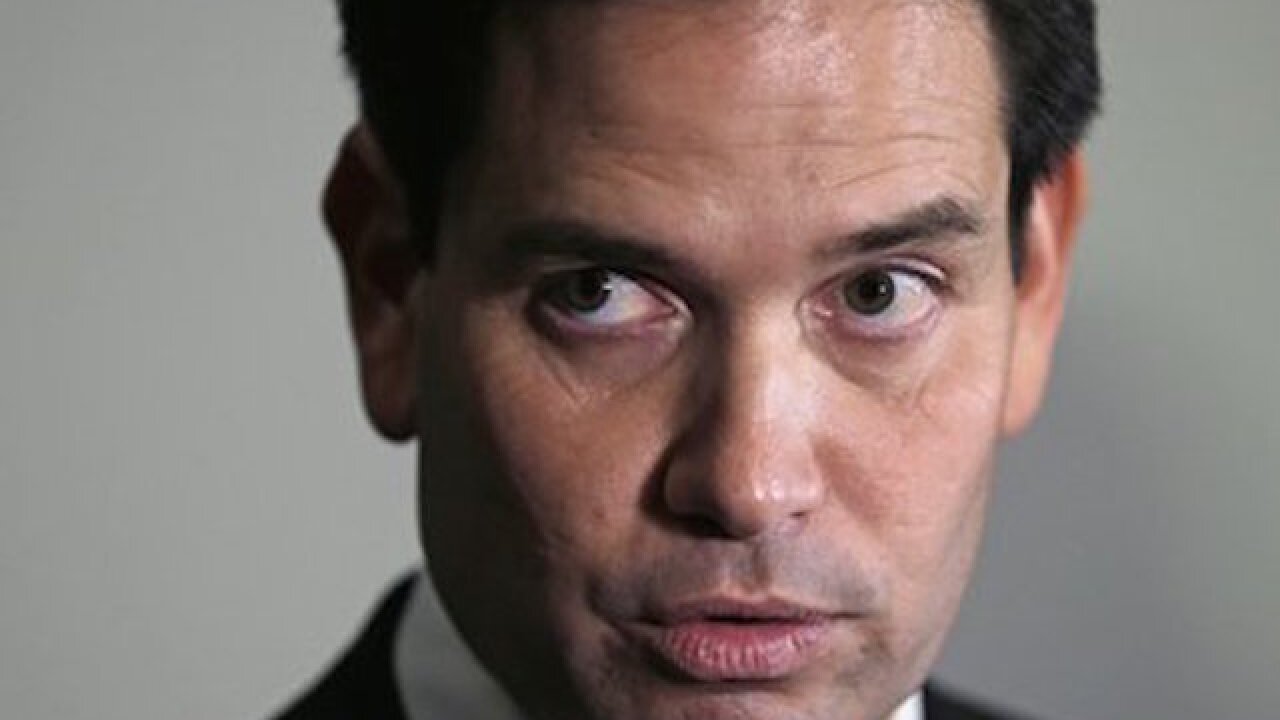 Marco Rubio, Jeb Bush, John Kasich and Chris Christie, the four Republican candidates in a showdown for their party's traditional supporters, closed last year with roughly as much money in the bank combined as Ted Cruz, the conservative insurgent they hope to topple.

And then there's Donald Trump, a celebrity businessman who has just begun to flex his billion-dollar bank account, lending his campaign $10.8 million from his personal wealth late last year.

The Republican candidates seeking to challenge Trump and Cruz at the top of the field were in varying degrees of financial distress at the end of 2015, fundraising reports filed Sunday night show, with Rubio in the best position to move forward. As the calendar flipped to 2016, the foursome had a combined $21.6 million left in the bank, while Cruz had almost $18.7 million at his disposal.

With voting beginning Monday in Iowa, and continuing next week in New Hampshire, Rubio, Bush, Kasich and Christie were running low on time — as well as money — in their efforts to rise. Should one or more of them continue on after New Hampshire, they'll face a cost-intensive primary calendar that demands travel among some two dozen states and advertising in some of the country's priciest media markets before March 15.

Of the four, Rubio, a Florida senator, led the money chase in the final three months of the year, collecting $14.2 million and ending with $10.4 million in the bank. What's more, he was on the upswing, having more than doubled his fundraising pace from earlier in the year. In total, he collected $39.5 million in 2015.

That's more than Bush's annual total. And the former Florida governor's fundraising fortunes appear to be moving in the opposite direction as Rubio's.

He raised just $7.1 million between Oct. 1 and Dec. 31, about half what his haul had been in the preceding fundraising quarter. He closed the year with about $7.6 million in the bank. He had detected a cash crisis in the fall and retrenched his national plan to focus almost exclusively on New Hampshire.

Yet in that state, where voters weigh in Feb. 9, there are two others who have gone all-in: Kasich, the Ohio governor, and Christie, the New Jersey governor. Those candidates have struggled to gain traction among donors, their fundraising reports show.

Kasich and Christie each raised about $3 million in between Oct. 1 and Dec. 31. Kasich closed out the year with about $2.5 million in cash, and Christie with just over $1 million.

Kasich's allies were eager to portray his financial prospects as improving. Outside groups supporting his bid said they've landed $4 million in checks from six donors in the past few weeks, a period of time not covered by the reports filed Sunday.

Cruz, by contrast, has proved an adept fundraiser. For the year, he raised about $47 million. His most recent report showed 42 percent of that came from contributors giving $200 or less, people who can continue to replenish his treasury. Donors are limited to $2,700 apiece for the primary contest.

That small-donor rate is far better than those of Rubio, Bush, Kasich and Christie.

On the opposite end of giving, the outside groups known as super political action committees also are displaying the effects of a crowded Republican primary. Super PACs can accept unlimited donations but cannot take directions from the candidates they're helping.

Some of the most generous backers in the 2012 GOP primary contest still appear to be making up their minds.

Las Vegas casino billionaire Sheldon Adelson, who helped keep Newt Gingrich's ultimately failed bid afloat last election, had yet to cut a check to a candidate's super PAC. But Sunday's fundraising documents show he and his wife did give the maximum legal amount to the campaigns of Cruz and Bush in November. That follows donations they made to Rubio last January.

Others major donors are spreading their largess — splitting much-needed funding among super PACs that are at war with one another.

Herro gave $50,000 in July to America Leads, the super PAC supporting Christie. But in November, he gave $150,000 to Conservative Solutions PAC, which supports Rubio. His support swung back to Christie in December, though, when he gave Christie's super PAC another $250,000.

New York investment banker Herbert Allen had perhaps the quickest turnaround in support. He gave $50,000 on Dec. 17 to America Leads, then the next day gave $50,000 to New Day for America, the super PAC boosting Kasich.

Julian Robertson, a hedge-fund billionaire, gave $1 million to Bush's super PAC in June and $25,000 to a pro-Kasich group in August. Chris Cline, a coal executive, gave $500,000 to Rubio's Conservative Solutions PAC in September, four months after he gave Bush's Right to Rise $1 million through a limited liability company.

Another multiplayer, Joe Ricketts, the billionaire founder of TD Ameritrade, and his wife, Marlene, have cut checks to groups helping Bush, Christie, Rubio and Cruz — as well as several who are no longer in the race.

Stanley Hubbard, a billionaire Minnesota broadcast executive who doesn't want to see Trump or Cruz at the top of the ticket, said he would spend major money backing any of the four mainstream candidates — if only one would rise to the top.

"If we get someone who really has a chance of doing something, I'm ready," Hubbard told The Associated Press.