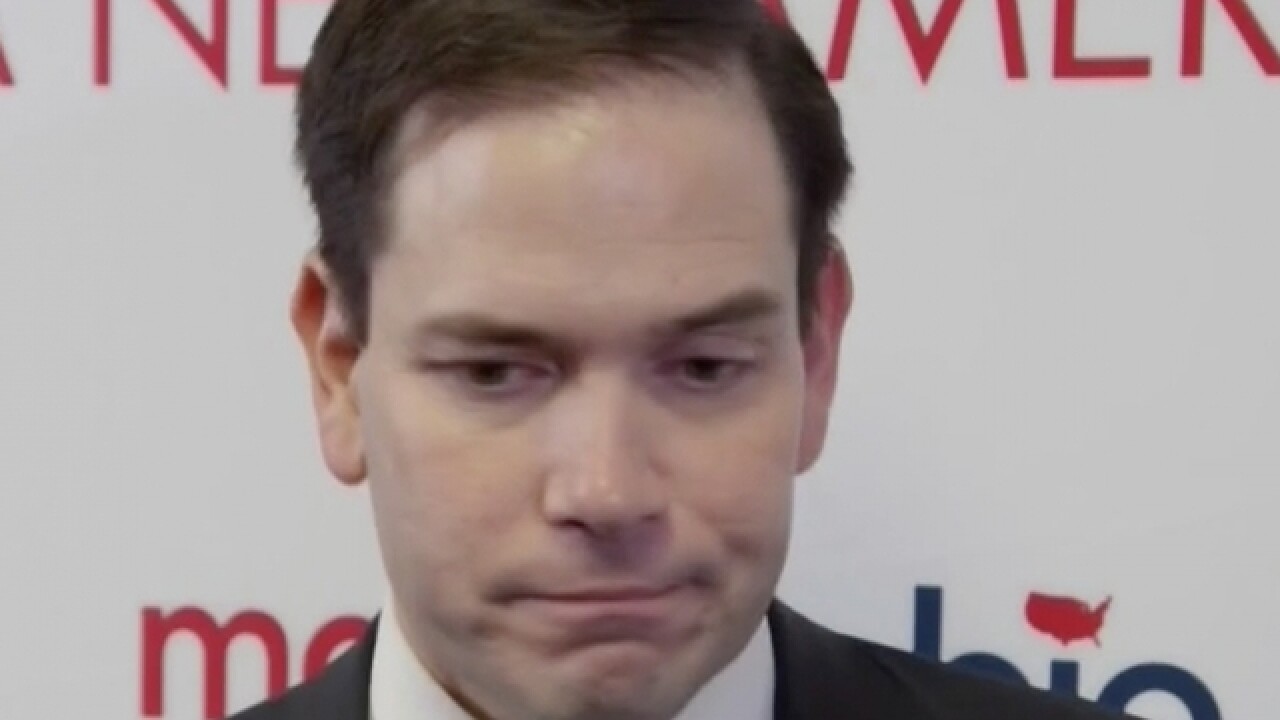 MIAMI (AP) — Florida Sen. Marco Rubio was among the Republican Party's biggest stars when he burst onto the national stage in the tea party wave of 2010. Now, he is facing a home-state showing on Tuesday that could devastate his 2016 presidential campaign and damage his political brand for years to come.
The Cuban-American's desire to become the nation's first Hispanic president, and his past support for a forgiving immigration policy, have failed to excite conservative primary voters who instead have flocked to Donald Trump's nativist politics.
"Marco's always had good timing. This time, the timing just wasn't there," said Albert Lorenzo, who managed Rubio's first state house campaign nearly two decades ago and stays in close contact with him.
Delegates Awarded to Presidential Candidates | InsideGov
Yet Lorenzo, like those closest to Rubio, suggest that should his bid end in disappointment, the senator's career in public service is far from over. The 44-year-old Republican could run for Florida governor in two years, president in four years or even his own Senate seat later this year.
"He's a talent you don't find," Lorenzo said.
Added Rubio ally, Miami city commissioner Francis Suarez: "I can't think of anybody more popular in Florida than he is — except maybe the man he's losing to."
Indeed, the first-term senator has been looking up at Trump in Florida preference polls for months. Rubio is the decided underdog to the billionaire businessman in Tuesday's do-or-die home-state contest.
Despite long odds, Rubio insists he's focused only on winning his party's 2016 presidential nomination.
"I haven't even thought about what I'm having for lunch today, much less what I'm going to run for in two years or nothing at all," he told reporters in West Palm Beach this week.
"If I never hold public office again, I'm comfortable with that," Rubio continued. "I can't tell you what's going to happen two to four years from now. But I have no plans. No thoughts. No contemplation. No meetings. Nothing about any future political run of any sort."
Should his presidential bid end in disappointment, many who know him expect a political comeback, though those closest to Rubio believe he could turn to the private sector to help provide for his family.
With four school-age children, Rubio has struggled with his personal finances in recent years, cashing out a retirement account as recently as 2014 to upgrade home appliances and pay for school costs. The Republican would have such well-compensated options as becoming a media personality or joining a law firm.
He would also need to decide whether he wants to return to Capitol Hill.
Rubio has previously said he would not run for president and the Senate at the same time. An exit from the White House contest next week would give him plenty of time to qualify for another, albeit unlikely, Senate run.
The deadline to file the necessary paperwork isn't until late June. And Federal Election Commission rules allow him to transfer any unused money from his presidential campaign to a Senate campaign account, albeit with caveats about individual donor limits.
Rubio would also be a prime candidate to run for the open governor's seat being vacated by the term-limited Gov. Rick Scott in 2018. Such a move would give the senator's political standing at least a year to recover after a brutal 2016 campaign.
Some conservatives suggest that may not be enough time to resurrect his political brand, should Rubio suffer an embarrassing loss on Tuesday.
"I think a loss in Florida is very bad for Rubio's political future. It is hard to argue that Rubio is the right guy to run for governor of Florida if he couldn't win a presidential primary there," said Mark Meckler, a longtime leader in the national tea party movement. "Luckily, he's a bright man, a seemingly nice guy, and probably has a solid future in the private sector. And perhaps after a few years out, he can come back and run again."
Rubio could, of course, make another run for the White House in 2020 or beyond if he fails this year. The vast majority of recent Republican presidential nominees have not captured the nomination in their first attempts.
Rubio, who turns 45 years old in May, is the youngest of the remaining four 2016 contenders. His supporters note that Ronald Reagan was 69 when he assumed office.
"People are still getting to know Marco," said Luis Rodriguez, a longtime Rubio supporter and former vice chairman of the Dade County Republican Party. "He has 20 more years he can run for president. If not now, in 5, 10 or 20 years he'll be there."
After a nasty 2016 campaign, however, it's unclear if Rubio wants to be there.
"Life," he said Saturday on Fox News, "is about a lot more than politics."
Associated Press 2016