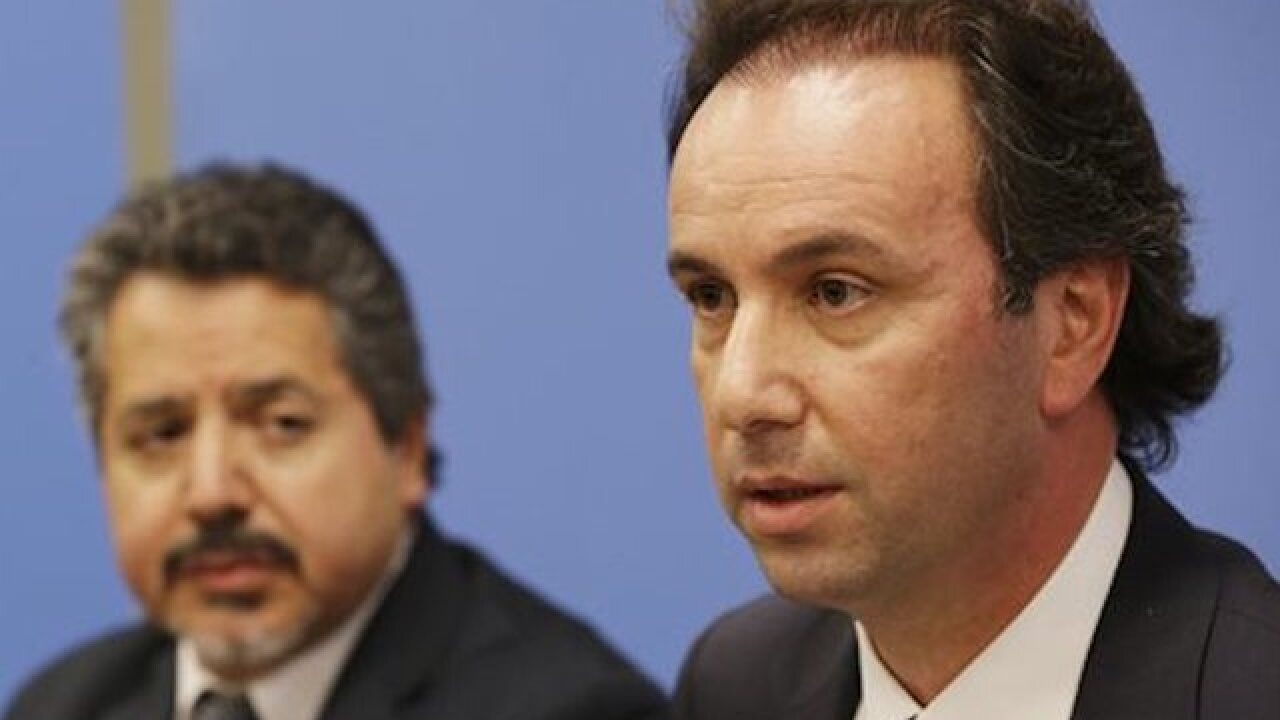 Mary Altaffer
<p>In this Wednesday, Sept. 30, 2015, file photo, president of the Syrian National Coalition Khaled Khoja, right, is joined by Syrian National Coalition Special Representative to the U.S. and the United Nations Najib Ghadbian as he speaks to reporters during a news conference, at U.N. headquarters. Saudi Arabia will be hosting the Syrian opposition and some insurgent groups next week as preparations come underway for peace talks between President Bashar Assad government and his opponents by the beginning of next year to try end Syria's deadly civil war. (AP Photo/Mary Altaffer, File)</p>

WASHINGTON (AP) — As the United States and world powers gather again in an attempt to end Syria's civil war, Russia appears to be calling the shots.

Nations meeting Friday in New York and the U.N. will essentially be negotiating a Russian plan for a "political transition," based on the Syrian government's consent and with no clear reference to President Bashar Assad's departure.

And as they look for a way to secure and enforce a peace that has proved all too elusive since 2011, Russia's recent military intervention appears to be providing the key leverage. As President Barack Obama said earlier this month, rebels who join the process could enjoy "pockets of cease-fire" where they no longer face Syrian or Russian bombs. The implication was that those who refuse could still be targeted.

In any event, diplomats from East and West say the chances for ending the conflict between Assad's military and moderate rebel forces are better now than they've been for a long while. All speak of seizing the momentum of several groundbreaking meetings in recent months.

For the first time, the rise of the Islamic State group has the U.S., Russia and even sworn enemies such as Saudi Arabia and Iran committed to a blueprint for peace negotiations and a set of principles for Syria's future. These are expected to be endorsed by the U.N. Security Council on Friday, following meetings among foreign ministers in New York. The body has passed no such resolution previously.

There are other signs of progress. The opposition is finalizing the makeup of its delegation for talks with the government that are supposed to start next month. Jordan is close to completing a list of militant groups that could join a unity government, and which, like the Islamic State and al-Qaida, would be declared terrorists and enemies of all.

For one, the Russian division of "terrorist" vs. legitimate rebel forces differs significantly from that of U.S. and Arab governments, diplomats say. And no agreement can be reached if Russia isn't satisfied.

An even bigger divide concerns Assad himself, with Washington desperate to secure a guarantee that he will eventually leave office in a transition, having abandoned Obama's previous demand that the Syrian leader step down immediately. Russia has spent the last five years blocking any international strategy or U.N. resolution that would show Assad the door.

Matthew Rycroft, Britain's U.N. ambassador, said these issues and the mechanics of a cease-fire will all be on the table Friday. A Security Council resolution on the Syrian peace process, he said, would be a "very rare showing of unity" for world powers who've been bitterly divided even as death tolls have soared past 300,000 and migrant crises and violent attacks have engulfed Europe and beyond.

To this day, the U.S. and its European and Arab allies are supporting anti-Assad rebels with training, equipment and funds. Russia is providing not only diplomatic and financial cover to Syria's government, but targeting Assad's moderate opponents in airstrikes, according to Western governments. Meanwhile, Iranian soldiers and proxy Hezbollah forces are dying on the battlefield alongside Assad's troops.

Nevertheless, top diplomats such as Secretary of State John Kerry have found cause for optimism in declarations that all are now interested in securing a broad peace that would allow the world to concentrate on defeating Islamic State extremists. The group has exploited the war's chaos to seize large parts of Syria and Iraq for its self-proclaimed caliphate.

The shared commitment against IS has governments believing they can sidestep their disagreements on Assad and other matters to end the killing. For the U.S., that has meant increasingly vague statements on when Assad might have to relinquish authority and even declaring the opposition's demand for his immediate ouster — long America's own stance — a "non-starting position."

In many ways, the parameters of the international mediation were framed early on in Syria's war by disagreements between Washington and Moscow. Russia prevailed in many of these disputes.

When diplomats gathered in Geneva in June 2012 to hash out a strategy, U.N. peace envoy Kofi Annan wanted a transitional government that would exclude "those whose continued presence and participation would undermine the credibility of the transition and jeopardize stability and reconciliation."

"That was code for excluding Assad," former Secretary of State Hillary Clinton, who backed such language, noted in her book "Hard Choices."

But the Russians balked, and also prevented the inclusion of any penalties for noncompliance.

As a compromise, Clinton said she herself put forward the idea of a new Syrian government comprised of individuals chosen by "mutual consent," believing that an accord along such lines would leave "Assad and his cronies ... stripped of their authority." The Russians took it as providing the Syrian leader a veto over any proposal for a would-be replacement.

The plan never went anywhere. After Kerry replaced Clinton as secretary of state, the talk went from "changing Assad's calculus" to something closer to Russia's position: an acknowledgement that he wouldn't have to give up the presidency on "Day One" of a transition.

When direct talks between the Syrian parties finally occurred in 2014, they never even got to questions of leadership. Yet as the world community now tries again, the so-called "Geneva communique" is still accepted as the basis for diplomacy.

The United States has a lot riding on engineering a cease-fire and jumpstarting Syria's transition.

Obama, who has ruled out any significant deployment of U.S. ground forces, has failed to build an American-trained, local fighting force or cajole Arab partners into sending their forces into Syria to defeat the Islamic State. While Kurdish Peshmerga and Arab militants have fought effectively, no one sees their numbers or strength as sufficient to achieve the mission.

The U.S. may have greater luck if peace between Syria's government and mainstream rebel groups holds. American officials hope each would then cooperate and turn their guns on IS, with regional powers such as Saudi Arabia filling the remaining needs for a ground force.

It's unclear if everyone would be on board, or if Russia would view such developments in its interests.