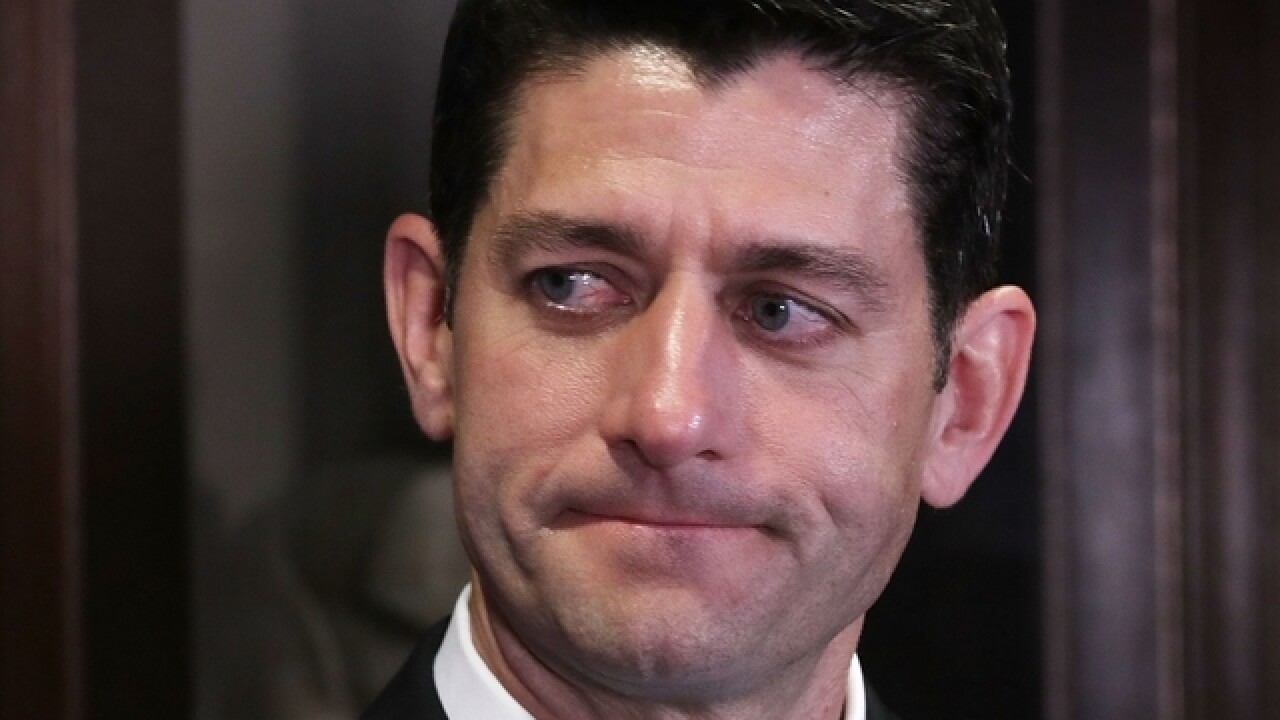 WASHINGTON (AP) — The House won't vote on proposed Democratic gun curbs, Speaker Paul Ryan suggested Tuesday as the rekindled election-year clash over firearms showed no sign of resolution. Democrats discussed their demands for votes with Ryan and said they told him: "We're not going away."
In an interview early Tuesday, Ryan, R-Wis., said Democrats' plans to broaden required background checks for gun buyers and to bar firearm sales to terror suspects were unconstitutional. And though he did not directly say he would block votes on the Democrats' bills, he said Republicans had no intention of rewarding Democrats for their lengthy House floor sit-in two weeks ago to demand gun-control votes.
"Win elections and get the majority, then you can set the agenda," Ryan said on the "Midday with Charlie Sykes" show on WTMU radio in Milwaukee.
Tuesday evening, he met privately with two leaders of that sit-in, Reps. John Lewis of Georgia and John Larson of Connecticut, in a session the two Democrats described as respectful.
"We wanted action, and we wanted action now," Lewis, the civil rights hero, told reporters of their message to Ryan. "And I think the speaker heard us, he was listening. But he couldn't give us any assurance" that he'd allow votes on the Democratic proposals.
"We're not going away," Larson said. "And we're determined in that effort."
Ryan spokeswoman AshLee Strong said the two parties "have different views on how to achieve a shared goal of preventing gun deaths," especially over how to protect gun owners' rights. She said the next steps on anti-terror legislation "will be discussed and determined by the majority in the coming days."
That seemed less assured than earlier comments from Ryan and other Republicans that the House would vote on GOP legislation this week. Late Tuesday, Republicans were working to line up enough GOP support for their own measure, with some in the party having questions about the bill's grants, its procedural protections for gun owners and other concerns.
The House convened peacefully Tuesday for its first session since Democrats seized control of the chamber last month with a sit-in that lasted almost 26 hours. Democrats delivered speeches demanding votes on gun curbs but took no disruptive actions.
The GOP has planned to approve Republican legislation this week that would let federal authorities block gun sales to suspected terrorists, but only if they could prove in court within three days that the suspect was planning to engage in terrorism.
That bill, which resembles National Rifle Association legislation that the Senate rejected last month, is considered ineffective by Democrats because they say the mechanism it sets would prove unworkably complicated. Even so, it reflects the pressure for action the June 12 mass shooting in Orlando, Florida, has placed on GOP leaders, who since the 2012 slaying of school children in Newtown, Connecticut, have not brought broad gun restrictions to the House floor.
Forty-nine victims were killed in Orlando, the worst mass-shooting in modern American history. It was conducted by Omar Mateen, a gunman who pledged support for leaders of the Islamic State extremist group, according to transcripts of his conversations with authorities.
The Republican measure would also create a new office within the Department of Homeland Security to focus on battling what it calls "radical Islamist terrorism" in the U.S.
Separately, Majority Leader Kevin McCarthy said he was looking into reports that Democrats treated the House's professional staff disrespectfully including "intimidation," and may have even damaged House furniture while taking over the chamber. He said he and Ryan would meet with the sergeant at arms later Tuesday to discuss what happened.
McCarthy, R-Calif., suggested House leaders hoped to take action to prevent any recurrence and potentially punish some people involved, but said for now they were still collecting facts.
"You cannot continue that behavior on the floor of the House of Representatives. I'll leave it at that," McCarthy told reporters at the Capitol. "That will not be tolerated."
Meanwhile, six people were arrested, including relatives of gun victims, after demonstrating in the Capitol Rotunda for gun-control measures. They were charged with demonstrating in areas where that is prohibited.
Copyright 2016 The Associated Press. All rights reserved. This material may not be published, broadcast, rewritten or redistributed.