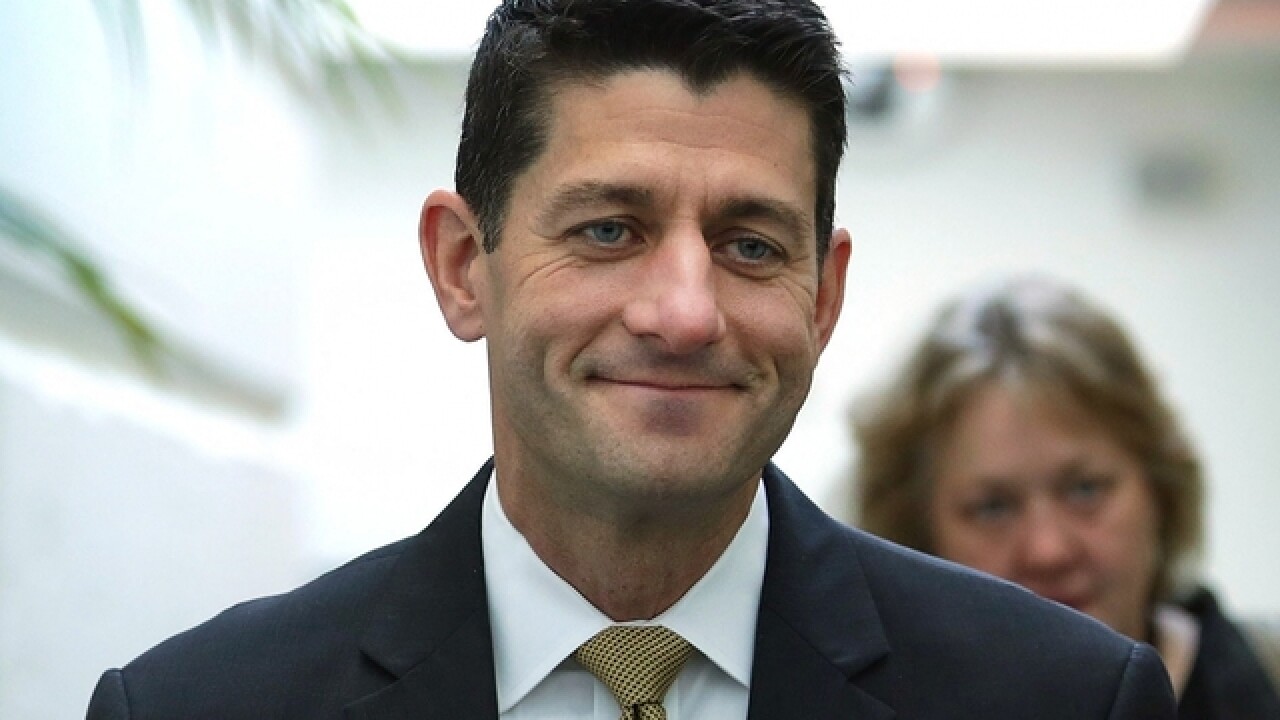 WASHINGTON (AP) — Congressional leaders girded Wednesday to push a Christmas compromise on tax cuts and spending through the House and Senate by week's end, legislation extending dozens of tax breaks for businesses and families and financing 2016 government operations.

"In divided government, you don't get everything you want," House Speaker Paul Ryan, R-Wis., told reporters about the 2,200-page pact, which was completed overnight. He predicted that the twin tax and spending bills would get bipartisan support, saying, "I think everybody can point to something that gives them a reason to be in favor of both of these bills."

Even so, House Democratic leaders were urging their rank-and-file members to oppose the package of tax breaks for businesses and individuals, which they considered too heavily weighted toward corporations and was roughly estimated to cost $650 billion over the next decade. They said they were still studying the spending measure.

"In my view it is practically an immorality in terms of how it damages the future," House Minority Leader Nancy Pelosi, D-Calif., said about the tax bill.

Republicans were likely to strongly support the tax measure but lean heavily against the $1.1 trillion spending bill, which they consider too costly, meaning it will need Democratic votes to pass.

The House will vote on the tax package Thursday and the spending bill on Friday, culminating a process that would be Congress' coda to a tumultuous 2015.

President Barack Obama's signature seemed assured for the accord, which bears victories for everyone from oil companies and working-class families to 9/11 emergency workers and biomedical researchers.

With temporary financing of federal agencies expiring Wednesday at midnight, the House by voice vote approved a stop-gap bill preventing a government shutdown through next Tuesday, giving lawmakers time to finish the long-term spending legislation. Senate passage was also expected.

The two-part compromise included a measure funding federal agencies in the 2016 federal budget year that started Oct. 1. A separate bill renews around 50 business and individual tax breaks that have expired or are about to lapse.

Flung between the measures were wins and losses for both parties.

As their top triumph, Republicans cited a lifting of the nation's ban on crude oil exports, imposed 40 years ago during chronic oil shortages. GOP lawmakers mocked it as a relic that ignored today's burgeoning U.S. supplies enabled by new drilling methods, while critics called the move an environmentally damaging windfall for big oil companies.

In exchange, Democrats won five-year extensions of credits for wind and solar energy producers and a renewal of a land and water conservation fund. They also blocked GOP proposals to thwart Obama administration clean air and water regulations, but many still found the lifting of the oil export ban a bitter pill.

After years of trying, Republicans claimed wins by making permanent business tax breaks for research and development and for buying new equipment. People in states without income taxes could also permanently continue deducting local sales taxes on their federal returns.

Taxes imposed to help pay for Obama's 2010 health care overhaul, which Republicans have long sought to unravel, were curbed — to the applause of the GOP and many Democrats. These included a tax on high-cost health insurance whose scheduled 2018 start was delayed two years, a win for unions, and a suspension in 2016 and 2017 of the 2.3 percent levy on many medical devices.

Language limiting reimbursements to insurance companies losing money on the federal and state health insurance exchanges was retained, despite Democratic efforts to erase it.

Many expired tax breaks were renewed temporarily, including reductions for some companies on Indian reservations, race horses and some film and TV productions.

Omitted were two major GOP goals: Language dismantling much of Obama's health care law and blocking federal money for Planned Parenthood, which would be certain to draw vetoes. Eager to enact the tax changes and federal funding without a veto fight that could prompt a government shutdown, Republicans have put those provisions in separate legislation to be voted on in January.

That included one making it much harder for Syrian and Iraqi refugees to enter the U.S., which the House approved after last month's terror attack in Paris. Surviving was widely supported language tightening curbs on foreign tourists visiting without visas.

An expired program providing treatment and health monitoring to 9/11 emergency responders was included.

Republicans said the bill held the Environmental Protection Agency's budget to 2008 spending levels. They also said they prevented increases in most Internal Revenue Service operations, though that agency's overall $11.2 billion budget was $1.1 billion more than the GOP-run House approved earlier this year.

Medical researchers at the government's National Institutes of Health would get $32 billion for 2016, a $2 billion increase.