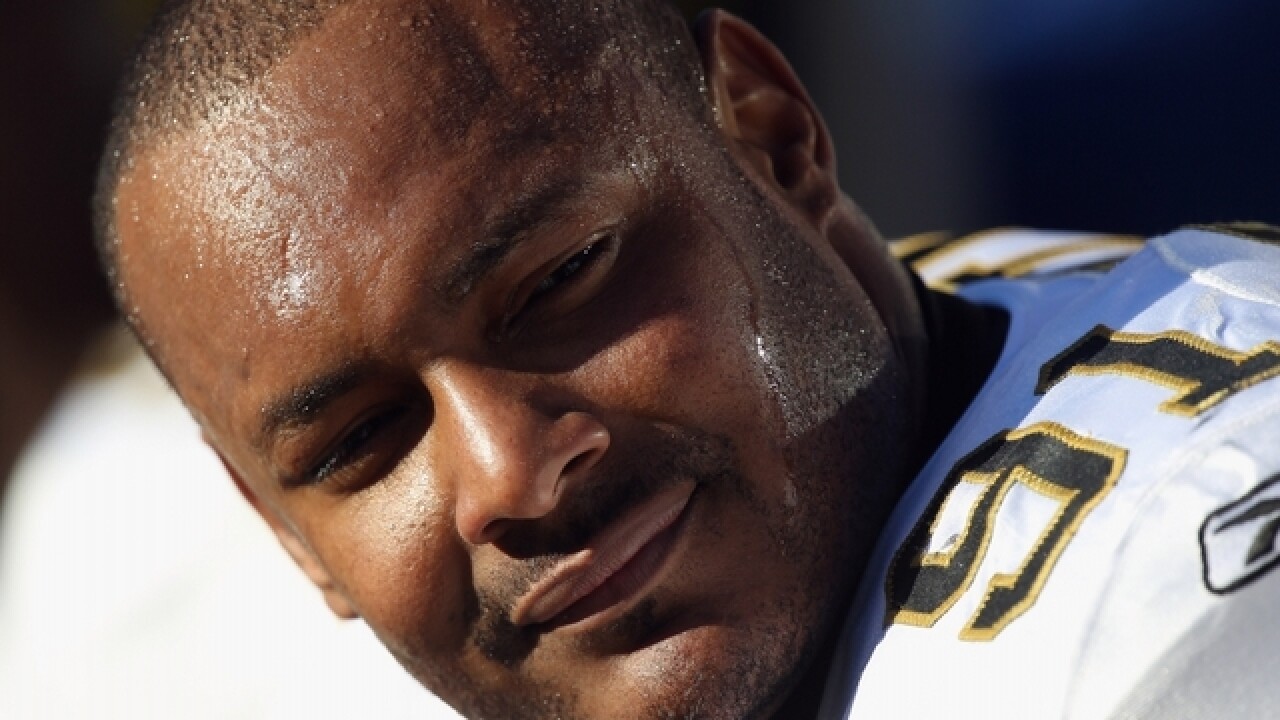 METAIRIE, La. (AP) — Wearing black and gold jerseys and bowing their heads, fans of slain former New Orleans Saints defensive end Will Smith paid homage to the star on Friday, almost a week after he was shot and killed during a traffic dispute.

Hundreds of fans, friends and members of the Saints team streamed into a visitation at the Saints' practice facility at a suburb of New Orleans.

Smith, 34, was shot and killed by 28-year-old Cardell Hayes last Saturday, police said. Smith was shot seven times in the back and once along his side, the coroner said. His wife, Racquel, was shot twice in the legs but survived. In a wheelchair and wearing sunglasses, she attended the visitation but did not talk to reporters.

Hayes' lawyer has said his client was not the aggressor and that he'll be vindicated when the true story is known. An attorney for Smith has described Hayes as "enraged" at the time of the shooting and portrayed the Smiths as the victims. Hayes was arrested and is currently being held on $1 million bond.

Smith is a much-beloved member of the Saints organization. He played for the team during its tumultuous post-Katrina season in 2005 when they traveled like nomads from stadium to stadium as the Superdome was repaired. Then in 2009, he was defensive captain on a team that went all the way to the Superbowl and won. He and his wife Racquel stayed in the area after he retired, and he remained active with various charities he's supported in the community.

"I came out today because this was a great man. And he did a lot for the city and we got to watch him every Sunday and look up to him," said Lance Ural, from New Orleans, who was wearing a Saints T-shirt as he walked out of the building.

"For something like this to happen it's only right that we pay our respects," he said.

There was no ceremony or speeches as fans filed through the practice field, past photos of Smith. They stood in front of his silver casket which was covered with a bouquet of white orchids. Behind the casket were three large photos of Smith playing football. On either side, large video screens showed video snippets and photos of Smith on and off the field.

Many fans lingered in front of the casket. Others kneeled down in prayer or bowed their heads in respect for a few minutes of silence.

"It broke my heart," said Khantrell Wagner, who lives in the same New Orleans Lower Garden District neighborhood where Smith died. "It just saddens me that this could have been avoided."

Anita Harrison said she had been attending Saints games since 1969 and has been a season-ticket holder since 2000. She admired Smith for his intensity and the way he took rookies under his wing.

"It really didn't hit me until I walked in here today," she said.

Smith was admired for his tenacity and grit on the field and for remaining in the area even after he left the team. He and his wife lived in Kenner, a New Orleans suburb, and Smith commuted to Florida, where he was getting his master's degree in business at the University of Miami. He had three children.

Many members of the Saints organization, including coach Sean Payton, owner Tom Benson, and former Saints' player Steve Gleason, attended the visitation, quietly talking and staying off to one side of the field.

Guests signed a book and prayer cards and could make donations to Smith's "Where There's A Will, There's a Way Foundation."

The grieving is expected to continue this evening where — in true New Orleans fashion — a second line parade of musicians and mourners will take place in the area he was killed.

A private family burial and funeral service is scheduled for Saturday.

Meanwhile, the lawyer for Hayes, John Fuller, wrote a letter to New Orleans police, demanding they recuse themselves from investigating the shooting.

In a letter delivered Friday to Mayor Mitch Landrieu and police Superintendent Michael Harrison, Fuller charged that the investigation should be handed over to state police or the FBI due "to a grave lack of faith in the honesty and competency" of the department's investigation.

In a statement, police spokesman Tyler Gamble said the homicide was getting a "fair, thorough and complete" investigation and that they would "follow the facts wherever they take us."