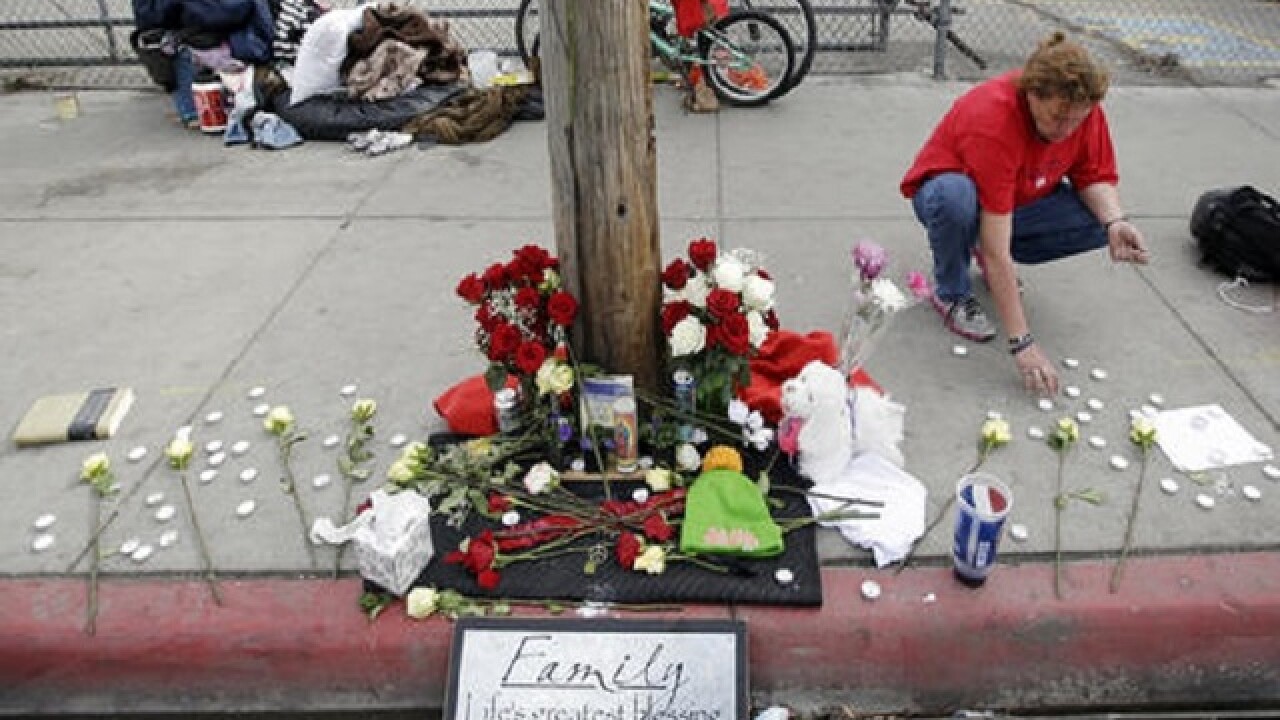 Rick Bowmer
<p>A woman arranges candle at a makeshift memorial for a 17-year-old boy who is in critical condition after being shot by Salt Lake City police Monday, Feb. 29, 2016, in Salt Lake City. The Saturday shooting that occurred near the city's primary homeless shelter on a street notorious for drug deals and fights raised questions about police use of force and the role of race. (AP Photo/Rick Bowmer)</p>

By: Associated Press
Posted at 9:31 PM, Feb 29, 2016
SALT LAKE CITY (AP) — Questions about why police shot and critically wounded a 17-year-old Somali refugee in Salt Lake City grew Monday as civil rights groups called for answers and several hundred protesters took the streets holdings signs that read, "Stop killer cops."
The Monday night rally in Utah — where speakers urged people to stand up to police and demand accountability — highlighted the latest flashpoint in the national discussion about police use of force, especially with minority victims.
Abdi Mohamed, who came to the U.S. with his family in 2004, was shot twice in the torso when officers intervened as he and another person attacked someone with metal sticks, police said.
Police say officers told them to drop their weapons, but the teen instead moved menacingly toward the victim. Mohamed was shot in the torso and remained in critical condition Monday.
The victim of the beating, meanwhile, didn't need medical attention.
Charley Hyde and Kaylee Peterson came to the rally holding cardboard cutouts in the shapes of guns with the words, "Don't shoot." They said they're fed up with officer's inability to deescalate or use non-lethal force.
"They need retraining," Peterson said. "Whatever happened to Tasers? Whatever to rubber bullets? Whatever happened to shooting shots in the sky as a warning?"
Police on Monday declined to offer more details on the incident and refused to release footage from the officers' body cameras, citing the investigation into the shooting and the possibility that the teenager could face charges in the fight.
That decision drew criticism from the Council on American-Islamic Relations, which called on police to release the body camera footage to avoid making the same mistake Chicago police made in waiting more than a year to release footage of a black teenager shot 16 times by a police officer.
Spokesman Ibrahim Hooper hasn't been able to talk to Mohamed's family but has been told they are Muslim.
Nacom Koffi was one of many who chanted "Black lives matter" and speculated that Mohamed's race played a factor in the shooting. Koffi, a black man from West Africa, joined the chorus of calls for police to release the body camera video.
"Why are police wearing video and we can't see it?" Koffi said. "If they're right, let's see it."
The shooting ignited unrest Saturday in the city's bustling downtown. About 100 officers donned riot gear, barricaded four city blocks and closed a light rail stop as bystanders threw rocks and bottles.
The street where the shooting happened is known for drug deals, beatings and overdoses, said employees at a nearby business. At the shooting scene, a makeshift memorial was cobbled together Monday with roses, candles and a beer can.
The city's primary homeless shelter is located in the area, less than a mile from an outdoor mall and the arena where the NBA's Utah Jazz play. At the Jazz game Saturday night, officials alerted fans not to drive in the area of the shooting.
Anna Brower, spokeswoman for the ACLU of Utah, said the response by police in riot gear raises real question not only about this incident but the larger issue of whether heavy police mobilization is the best way to handle high-crime areas like this one.
Her organization is calling for city leaders to ensure a complete investigation is done and that the Mohamed's family is treated fairly and compassionately during the process.
The worst of the protest was over in about 10 minutes, said interim Salt Lake City Police Chief Mike Brown. His eyes filled with tears as he described meeting with the teen's mother and sitting with her in the hospital.
Bystander Selam Mohammad told The Salt Lake Tribune and Deseret News that he was a friend of the teenager who was shot as he turned to face police.
"He barely even turned around, then boom, boom, boom — and he just dropped," Mohammad told the Deseret News, saying he was at the scene.
Police said they could not confirm or deny that account.
The union that represents the officers said they were stopping a beating.
"This case is not about race, they acted in defense of an innocent party," Salt Lake Police Association president Michael Millard in a statement.
Utah law allows the use of deadly force when people, including police officers, fear someone who could badly hurt or kill them. New police training standards, though, tell officers to back off and take cover so they won't need to shoot, Brown said.
Abdi Mohamed's family fled Somalia and lived in Kenya before coming to the U.S. when he was just a young boy, said Aden Batar of Catholic Community Services in Salt Lake City.
Associated Press 2016