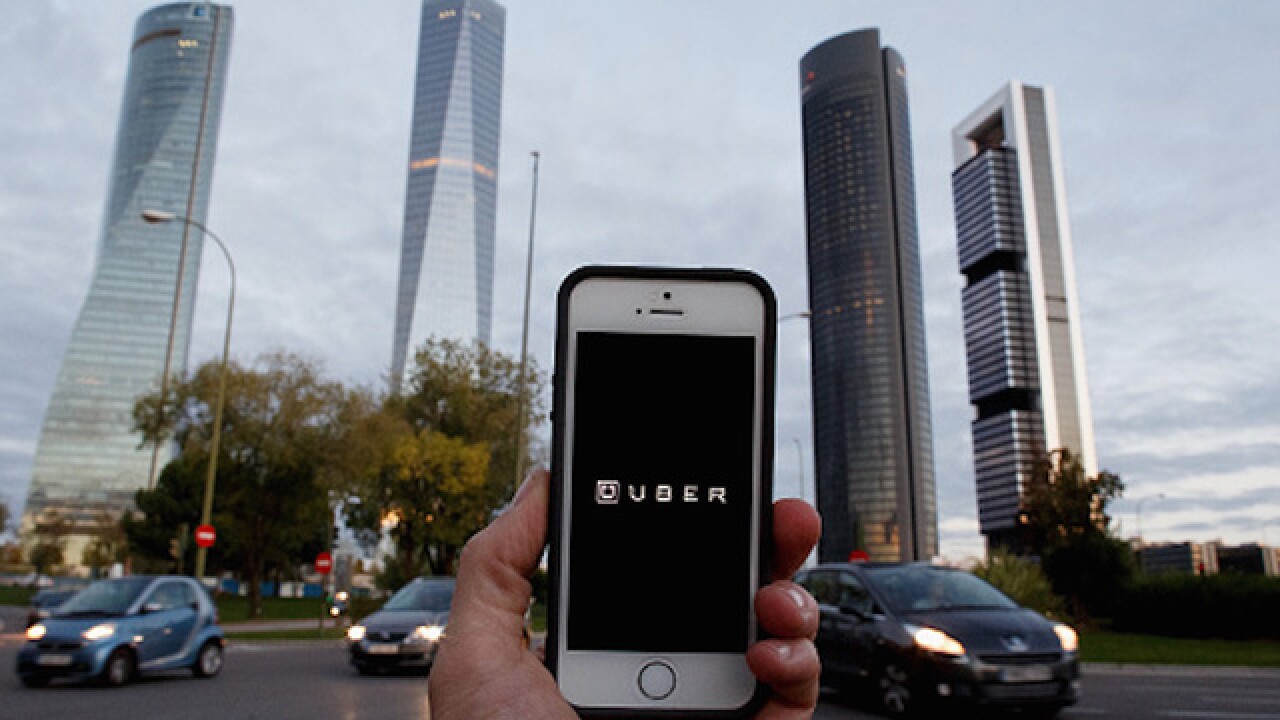 Pablo Blazquez Dominguez
<p>MADRID, SPAIN - OCTOBER 14: In this Photo Illustration a smart phone displays a picture with the logo of the news taxi app 'Uber' near the Cuatro Torres 'Four Towers' business area on October 14, 2014 in Madrid, Spain. 'Uber' application started to operate in Madrid last September despite Taxi drivers claim it is an illegal activity and its drivers currently operate without a license. 'Uber' is an American based company which is quickly expanding to some of the main cities from around the world. (Photo Illustration by Pablo Blazquez Dominguez/Getty Images)</p>

SEATTLE (AP) — Seattle on Monday became the first city in the nation to allow drivers of ride-hailing companies such as Uber and Lyft to unionize over pay and working conditions.

The City Council voted 8-0 in favor of the legislation, which is seen as a test case for the changing 21st century workforce. The companies strongly oppose it and are expected to challenge it in court.

The measure requires companies that hire or contract with drivers of taxis, for-hire transportation companies and app-based ride-hailing services to bargain with their drivers, if a majority show they want to be represented. Drivers would be represented by nonprofit organizations certified by the city.

Seattle has been a national leader on workers' rights, such as gradually raising the minimum wage to $15 and requiring most employers to provide paid sick leave.

Councilmember Mike O'Brien has said the bill is the next step in economic justice for workers. He promoted it as a way to give drivers a say in their working conditions.

Many drivers in Seattle are immigrants who depend on full-time work, but some make less than minimum wage and lack basic worker rights, such as sick leave and protection from retaliation, O'Brien said.

San Francisco-based Uber and others say federal labor law prevents cities from regulating collective bargaining for independent contractors, and the ordinance would violate federal antitrust laws. Opponents also argue it would be costly for the city to implement, it would violate drivers' privacy since their information would be given to the organization, and it would stifle the growth of the on-demand economy.

"It is a virtual certainty that the ordinance will be challenged in court if it is enacted," said Charlotte Garden, an assistant law professor at Seattle University. "I anticipate that other cities will consider similar measures, but they may wait to see whether the ordinance survives review by a federal court."

Meanwhile, Mayor Ed Murray told the council in a letter Monday that he supports the right of workers to unionize but has serious concerns about the bill and asked that it be amended further. Murray worried about the unknown costs of administering the measure, the burden of rulemaking on city staff and the potential costs of defending it court.

Uber has about 400,000 drivers nationwide with about 10,000 in Seattle. Its rival, Lyft, also has thousands of drivers in Seattle but declined to give a specific number.

Legal experts have been mixed on how the bill would be challenged in court, including whether the ordinance violates antitrust laws because it would allow drivers to get together and set rates.

Uber is facing a class-action lawsuit in federal court in California over worker classification. The plaintiffs named in the suit say they are Uber employees, not independent contractors, and have been shortchanged on expenses and tips.

Uber says drivers have flexibility in deciding when they work and how many hours, and many chose to drive to supplement their income. But drivers don't have a say in rate changes, can be deactivated at will and don't have access to worker protections such as sick leave and minimum wage laws, Dawn Gearhart, a representative with Teamsters Local 117.

Under the proposed ordinance, the city will give certified nonprofit organizations a list of eligible drivers at each company, and the groups must show that a majority of drivers of each company want representation. The organizations would then bargain on behalf of those drivers.