Seoul, US to open talks on missile defense 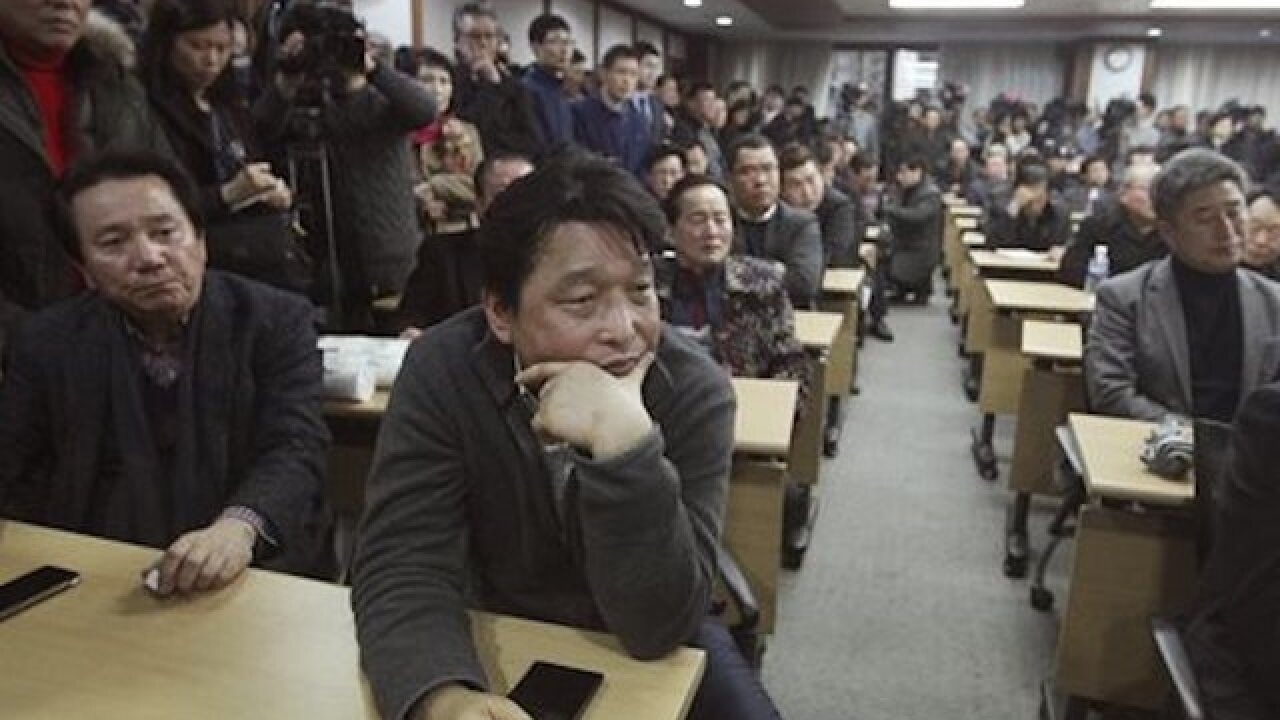 Copyright Associated Press
Ahn Young-joon
<p>South Korean owners who run factories in the suspended inter-Korean Kaesong Industrial Complex, attend an emergency meeting held by the council of South Korean companies operating in the industrial park, in Seoul, South Korea, Friday, Feb. 12, 2016. North Korea on Thursday ordered a military takeover of a factory park that had been the last major symbol of cooperation with South Korea, calling Seoul's earlier suspension of operations at the jointly run facility as punishment for the North's recent rocket launch a "dangerous declaration of war."(AP Photo/Ahnn Young-joon)</p>

The new tough stance follows South Korea's decision to shut down an inter-Korean factory park that had been the rival Koreas' last major symbol of cooperation, but that Seoul said had been used by North Korea to fund its nuclear and missile programs. North Korea responded by deporting South Korean citizens, seizing South Korean assets and vowing to militarize the park.

South Korea on Friday cut off power and water supplies to the industrial park and announced that its planned talks with the United States on deploying the Terminal High-Altitude Area Defense, or THAAD, one of the most advanced missile defense systems in the world, could start next week. Officials say they have yet to set a specific starting date for the talks.

South Korean media have long speculated that the two countries are working on a THAAD deployment in South Korea, but it took the North's rocket launch, which outsiders see as a test of banned ballistic missile technology, for the allies to formally announce they will begin the missile defense talks.

Beijing and Moscow are sensitive to the possibility of THAAD in South Korea; critics say the system could help U.S. radar spot missiles in other countries.

China's state media quickly made the country's displeasure known, while Russia also expressed worries about the deployment. North Korea has previously warned of a nuclear war in the region and threatened to bolster its armed forces if the THAAD deployment occurs.

In Munich, U.S. Secretary of State John Kerry was meeting with his Chinese and South Korean counterparts to discuss the response to North Korea's actions, including the missile system.

"That's what we're talking about today," Kerry told reporters as he started talks with Chinese Foreign Minister Wang Yi on the sidelines of a Munich Security Conference.

Seoul and Washington want to deploy the system at an early date and the upcoming talks will discuss where and exactly when the deployment can be made, a South Korean defense official said, requesting anonymity because of department rules.

The official said the THAAD deployment is designed to protect South Korea from North Korean threats and isn't targeting China or anyone else.

The current standoff flared after North Korea carried out a nuclear test last month, its fourth, followed by the long-range rocket launch on Sunday.

In one of its harshest possible options for punishment, South Korea on Thursday began suspending operations at the factory park in the North Korean border town of Kaesong.

The North's reaction was swift. Calling the suspension a "dangerous declaration of war," it deported South Korean workers at Kaesong and shut off two key communication hotlines.

The Associated Press requested interviews with officials at more than 20 South Korean companies that operated at Kaesong, but none accepted.

Combining South Korean initiative, capital and technology with the North's cheap labor, the industrial park has been seen as a test case for reunification between the Koreas. Last year, 124 South Korean companies hired 54,000 North Korean workers to produce socks, wristwatches and other goods worth about $500 million.

North Korea, in a fit of anger over U.S.-South Korean military drills, pulled its workers from Kaesong for about five months in 2013. But, generally, the complex has been seen as above the constant squabbling and occasional bloodshed between the Koreas, one of the last few bright spots in a relationship more often marked by threats of war.