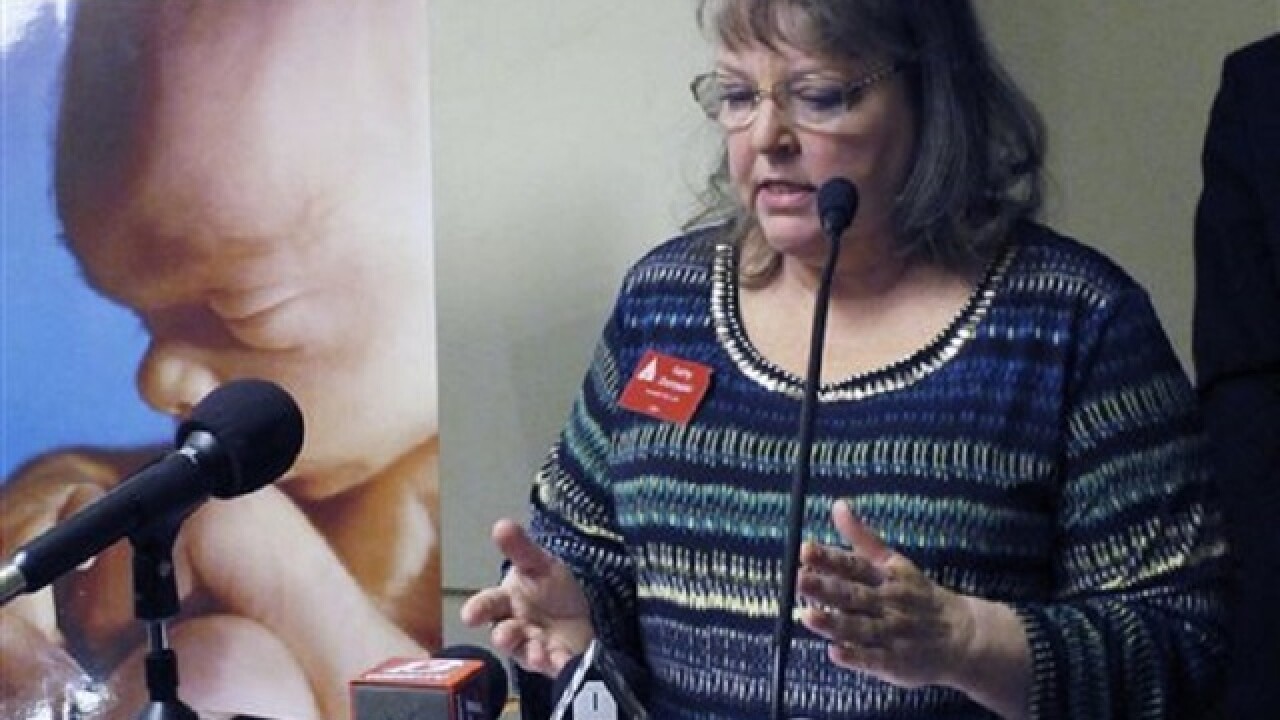 John Hanna
<p>Kathy Ostrowski, lobbyist and legislative director for the anti-abortion group Kansans for Life, criticizes a state Court of Appeals ruling on abortion, Friday, Jan. 22, 2016, at the Statehouse in Topeka, Kan. The ruling blocked enforcement of the state�s first-in-the-nation ban on a common second-trimester procedure. (AP Photo/John Hanna).</p>

By: Associated Press
Posted at 4:55 AM, Feb 11, 2016
JACKSON, Miss. (AP) — Abortion opponents in Mississippi, West Virginia and several other states are filing bills to ban an abortion procedure commonly used in the second trimester that opponents describe as dismembering a fetus.
Courts have already blocked similar laws that Kansas and Oklahoma enacted in 2015.
The New York-based Center for Reproductive Rights, which represents abortion providers in legal fights, says banning the dilation and evacuation method of abortion — commonly called "D&E" — is unconstitutional because it interferes with private medical decisions.
"Laws like these are an attack on women's health, personal autonomy, and the doctor-patient relationship, and they have the potential to force physicians to subject women seeking safe and legal abortion services in the second trimester to additional invasive and unnecessary procedures," Kelly Baden, the center's director of state advocacy, said in a letter this week to West Virginia lawmakers.
Baden said dilation and evacuation is the safest method for the second trimester and is used for about 95 percent of all second-trimester abortions in the U.S.
The Mississippi bill uses language provided by the Washington-based National Right to Life Committee. It would prohibit any abortion that would involve extracting a live fetus in pieces from the uterus using instruments like clamps and forceps, calling that procedure a "dismemberment abortion."
Mary Balch, director of state legislation for the anti-abortion group, said the proposals would not ban all dilation and evacuation abortions. The law would still allow abortions in which the fetus is dead before it is extracted, which she said do not pose any greater health risk to the woman.
The Center for Reproductive Rights says it is not always medically necessary to induce fetal death before starting an abortion, and it's never required before 18 weeks, when most women would be seeking abortions. The American Congress of Obstetricians and Gynecologists says there is no evidence that inducing fetal death makes second-trimester abortions safer. If proposals such as those in Mississippi become law, the Center said a woman seeking a D&E abortion would have to have an injection to the fetus to stop its development before the procedure.
Republican Rep. Sam Mims, chairman of the Mississippi House Public Health Committee, is sponsoring the proposal to ban a procedure he calls "very graphic."
"I believe that life begins at conception. To me, this is a baby," Mims said.
Similar bills are also being filed in Idaho, Missouri, Minnesota and Nebraska, Balch said. Others are expected in Kentucky, Michigan, New Hampshire, New Jersey, Rhode Island and South Carolina, said Jennifer Miller, spokeswoman for the Center for Reproductive Rights.
Mississippi has enacted several abortion restrictions in recent years, including banning abortions after 20 weeks' gestation last year. The U.S. Supreme Court later this year will consider the constitutionality of a 2011 Mississippi law that requires physicians at the state's only abortion clinic to obtain admitting privileges at a local hospital. The physicians have been unable to obtain them, but the law has been blocked by federal courts.
Diane Derzis is the owner of the lone Mississippi abortion clinic, Jackson Women's Health Organization, which does abortions up to 15 weeks' gestation. She said the state is inviting another expensive lawsuit by trying to ban a commonly used abortion method.
"This is just another way of attacking abortion," Derzis said. "An entire, intact fetus is not the result of any abortion, so it affects all abortions."
In West Virginia, Republican Sen. Ryan Ferns is chairman of the Health and Human Resources Committee that is scheduled to consider an amended version of the proposed ban on Thursday. The changed bill will say that second-trimester dilation and evacuation procedures are illegal unless the physician first "creates demise or death" of the fetus. It doesn't apply to emergency procedures.
Ferns said there are a variety of ways a physician can accomplish that, including breaking the amniotic sack.
"We're not preventing a second-trimester abortion," Ferns said. "We just don't want an unborn child to have to go through the gruesome procedure of being ripped apart limb by limb while they're still alive."
There would be no criminal or civil penalties, but a physician could be called before the board of medicine for a license review.
West Virginia Delegate Stephen Skinner, a Democrat, opposes the bill.
"Banning a method of a medical procedure is not something the Legislature should get involved in," Skinner said. "We need to let doctors decide what's best for their patient in consultation with the patient and her family. The Legislature getting into the practice of medicine is a dangerous thing."
Associated Press 2016