'Sleeping on the interstate': 100s stranded 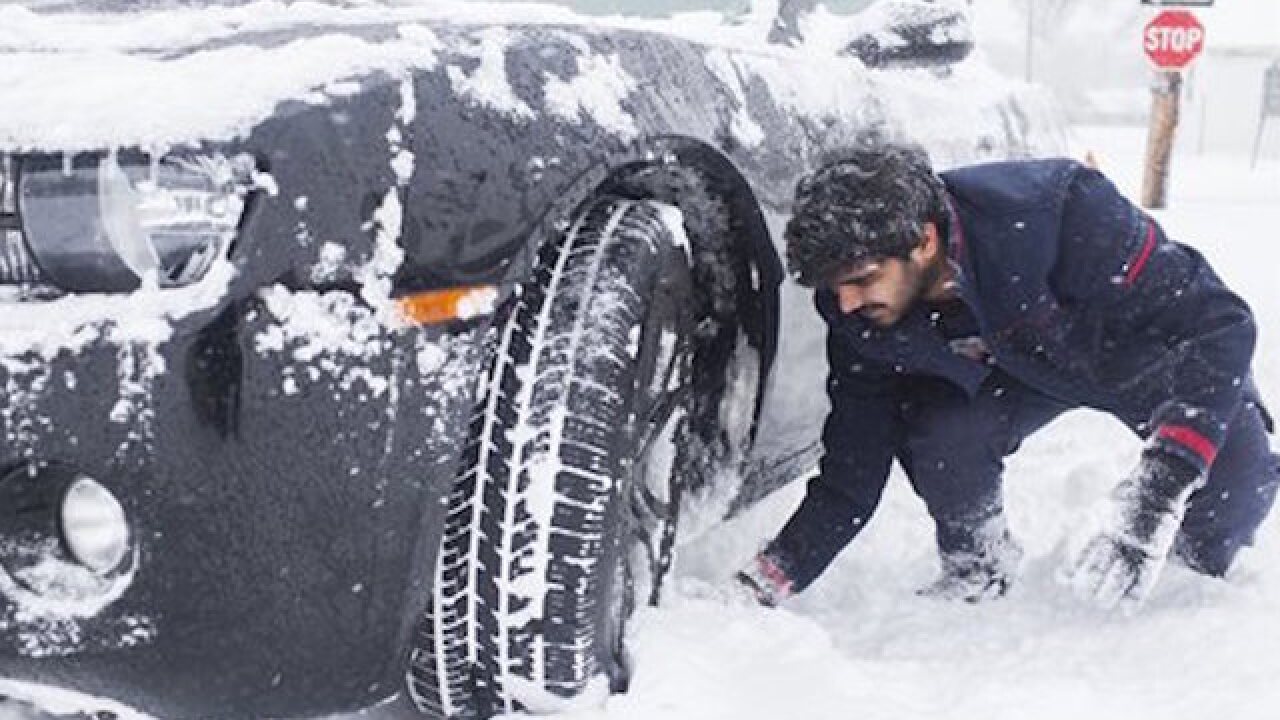 Copyright Associated Press
Austin Anthony
<p>Srikanth Bellamkonda of Andhra Pradesh, India, digs out his car after getting stuck in the snow on Friday, Jan. 22, 2016, in Bowling Green, Ky. A massive blizzard began dumping snow on the southern and eastern United States on Friday, with mass flight cancelations, five states declaring states of emergency and more than two feet (60 centimeters) predicted for Washington alone. Blizzard warnings or watches were in effect along the storm's path, from Arkansas through Tennessee and Kentucky to the mid-Atlantic states and as far north as New York. (Austin Anthony/Daily News via AP)</p>

LEXINGTON, Ky. (AP) — What was supposed to be a relaxing weekend in Tennessee for Alexx and Kate Bragg turned into a grueling night of frozen gridlock along one of the country's busiest interstate highways.

Hundreds of drivers were stuck on I-75 overnight after a massive winter storm dumped more than a foot of snow in south central Kentucky, clogging cars and causing multiple crashes that created a 30-mile stretch of shivering passengers.

By Saturday morning, I-75 southbound had been cleared and traffic was moving — albeit slowly. Northbound lanes were closed; Kentucky State Police say they anticipate opening them before noon. Trooper Lloyd Cochran said he couldn't give a figure for number of cars or people affected by the standstill but noted that no injuries were reported.

Kate Bragg was one of the stuck motorists, spending most of the night at mile marker 59 between Livingston and Mount Vernon. She and her husband, Alexx, are from Indiana and were on their way to Tennessee for a getaway weekend when they got stuck.

For hours, the only people they saw were salt truck drivers begging motorists to move over so they could exit, refuel and hopefully help clear the roads. At one point, Alexx Bragg tucked in behind a salt truck and followed it on the shoulder, only to get stuck again.

"We are worried because we are from Indiana, have no concept of where we are and no idea when to anticipate getting out," Bragg told The Associated Press in an electronic message using Twitter.

Kentucky officials set up shelters for stranded motorists at churches and public schools along the Interstate, but the Braggs were too far away and could not make it to them.

"Emotional breaking point coupled with exhaustion has been met," Kate Bragg tweeted just after 11 p.m. after spending about eight hours on the highway, later adding: "Sleeping on the interstate... Don't they normally caution against this?"

Kate Bragg posted on Twitter that the couple finally got off the interstate at about 2:30 a.m., using online mapping services to find a way around the clogged interstate using side roads that had been plowed.

Traffic was slowly moving slowly Saturday along the 30-mile stretch, from Berea to London, according to Buddy Rogers, spokesman for Kentucky Emergency Management.

All local hotels were booked, Cochran said. He described people still stuck on the road, some milling about at exits or leaving their cars to seek out the few stores and restaurants nearby.

About 65 people had taken shelter at the West London Baptist Church Saturday morning, according to Jenny Saylor with the Lily Volunteer Fire Department.

"They're pretty tired, but content," she said. "We've got them food and drinks and we're taking care of them pretty good."