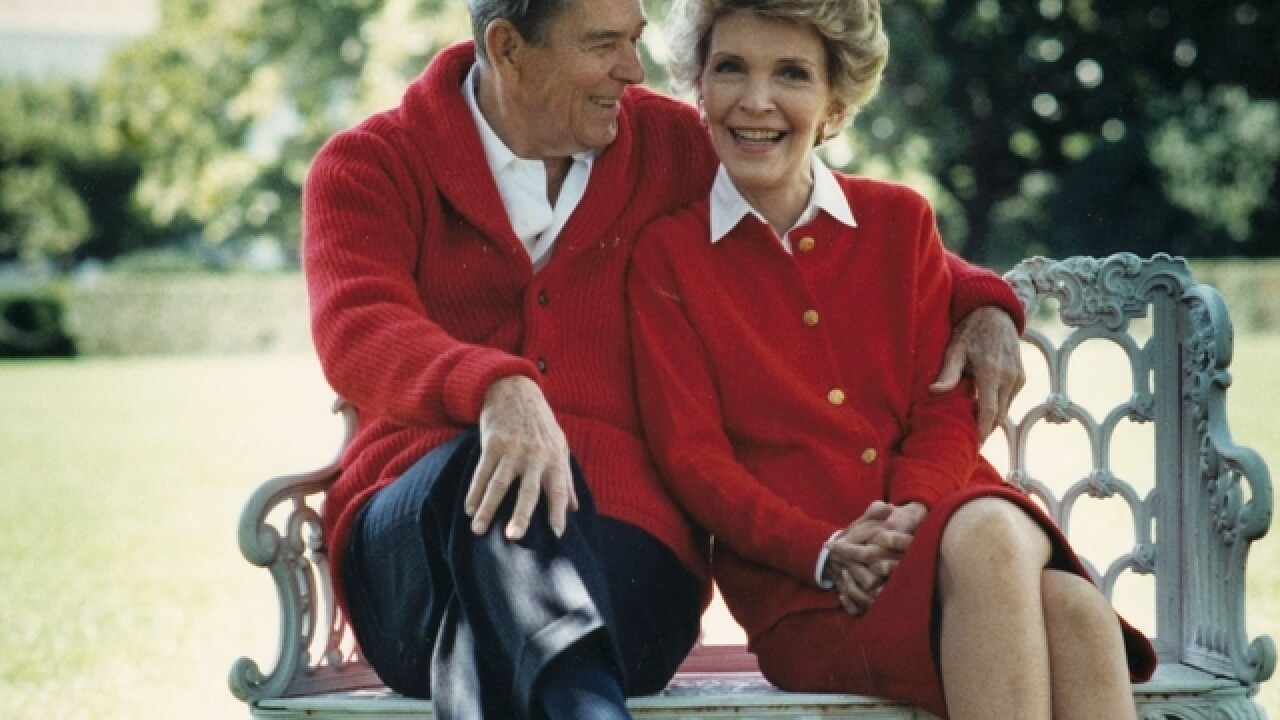 Former First Lady Nancy Reagan died Sunday morning of congestive heart failure, and the nation mourned for the loss of a woman known as the closest adviser and most passionate supporter of her husband, former President Ronald Reagan.
Mourners stopped by the main entrance northwest of Los Angeles to pay their respects throughout the day, snapping photos and leaving flowers. Reagan is to be buried by her husband at his presidential library – which was closed Sunday after the news -- in Simi Valley, California, library spokeswoman Joanne Drake said in a statement.
READ: Flowers left at Reagan Library following first lady's death
Photos: Remembering former First Lady Nancy Reagan
And while you could feel the love in Simi Valley, a slew of support also erupted on social media from fellow politicians, celebrities and supporters.

I am saddened by the passing of my step mother Nancy Reagan...She is once again with the man she loved.God Bless...
...

First by stepson Michael Reagan, the former president’s biological son. He tweeted, “I am saddened by the passing of my step mother Nancy Reagan...She is once again with the man she loved.”

Nancy Reagan was a wonderful, elegant First Lady who loved her husband more than life itself. #RIPdearNancy pic.twitter.com/vXosZ8mcNH

#NancyReagan was some kind of gal! Warm & wonderful. Always had her husband's best interest. We'll miss you. pic.twitter.com/uXJVJ9D19w

With the passing of Nancy Reagan, God and Ronnie have finally welcomed a choice soul home. https://t.co/NjiOBT9xoQ

Nancy Reagan will be remembered for her deep passion for this nation and love for her husband, Ronald. The Reagan family is in our prayers.

Today our nation mourns the loss of Nancy Reagan, a true example of integrity and grace. My prayers are with the entire Reagan family.

Donald Trump chimed in with some kind words of his own, while Arnold Schwarzenegger referred to the beloved First Lady as “one of my heroes.”

Nancy Reagan, the wife of a truly great President, was an amazing woman. She will be missed!

She's with her Ronnie now, but those of us she left behind will miss her dearly. (2/2)

RIP Nancy Reagan. You inspired so many as a BC survivor. TY 4 being one of the earliest supporters of our mission. pic.twitter.com/ke1mLsivEo

Condolences going out to the family of Nancy Reagan.

Nancy Reagan was an example to us all of graciousness, loyalty & dignity. RIP. https://t.co/SHXZWi50l8 pic.twitter.com/ExDKJwNZV2

My thoughts & prayers are with Nancy Reagan's family and friends. Very sad to learn of her passing.