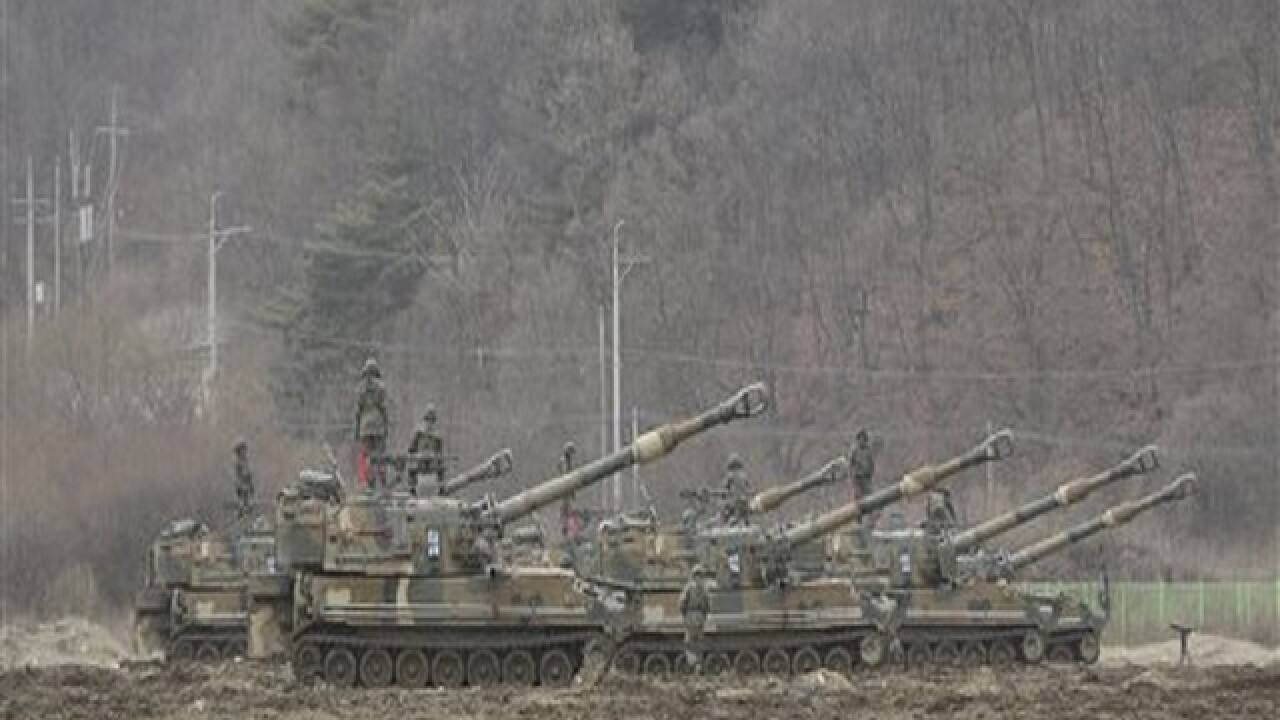 Ahn Young-joon
<p>South Korean army soldiers stand on their K-55 self-propelled howitzers during an annual exercise in Paju, near the border with North Korea, Monday, March 7, 2016. North Korea on Monday issued its latest belligerent threat, warning of an indiscriminate "pre-emptive nuclear strike of justice" on Washington and Seoul, this time in reaction to the start of huge U.S.-South Korean military drills. (AP Photo/Ahn Young-joon)</p>

SEOUL, South Korea (AP) — South Korea said Tuesday it is imposing unilateral sanctions on North Korea over its recent nuclear test and rocket launch, including a ban on financial dealings with 40 individuals and 30 entities.

The announcement came a day after North Korea warned of pre-emptive nuclear strikes in response to the start of U.S.-South Korean military drills it views as a rehearsal for invasion. This year's annual drills, set to run until late April, are the largest ever.

The National Intelligence Service said the cyberattacks occurred between late February and early March. It didn't say which officials' phones were hacked or whether the stolen messages contained any sensitive information.

The new South Korean sanctions target 38 individuals and 24 organizations in North Korea who Seoul says are responsible for the North's development of weapons of mass destruction. A Singaporean, a Taiwanese and six entities in Myanmar, Thailand, Taiwan and other countries will also be sanctioned for indirectly assisting North Korea, the South Korean government said in a statement.

It said South Koreans will be barred from engaging in financial and foreign exchange dealings with the blacklisted people and organizations, whose asserts in South Korea will be frozen.

South Korea also said it will ban the entrance of any ship that has stopped at a North Korean port in the previous 180 days. Currently only North Korean ships are banned.

It said it will continue to advise South Korean citizens not to eat at North Korea-run restaurants around the world. North Korea operates about 130 restaurants in China and other countries.

Senior South Korean official Lee Sukjoon told reporters that the restaurants are a source of foreign currency that is suspected of being linked to the North's development of weapons of mass destruction. He did not elaborate.

It's unclear how much the new South Korean steps will sting North Korea, which has already been slapped with international sanctions over its nuclear and missile programs. The U.N. Security Council last week adopted its toughest sanctions against North Korea in two decades. North Korea described them as "nothing new" but warned it would take unspecified "merciless" steps in response.

South Korea's announcement underscores its pursuit of a hard-line policy toward the North. South Korea earlier halted operations at a jointly run factory park in North Korea, the last major cooperation project between the rivals.

The North Korean entities targeted by the new sanctions include banks, trading and shipping companies, and an atomic research center. The individuals include Kim Yong Chul, a former head of North Korea's intelligence agency who was believed to be behind two attacks blamed on North Korea that killed 50 South Koreans in 2010. Many of the North Korean individuals and entities are already under U.S., Japanese, U.N. or other international sanctions.

There was no immediate reaction from North Korea to the South Korean allegations of cellphone hacking.

Seoul has accused Pyongyang of launching a slew of cyberattacks in recent years, but Pyongyang has denied the allegations.

Many of the alleged cyberattacks failed to infiltrate targeted computer systems of businesses and government agencies. But in several cases, hackers destroyed hard drive disks, paralyzed banking systems or disrupted access to websites. One attack was so crippling that a South Korean bank was unable to resume online banking services for more than two weeks.

Last year, South Korea said North Korea has a 6,000-member cyber army dedicated to disrupting the South's military and government. The figure was a sharp increase from a 2013 South Korean estimate of 3,000 such specialists.