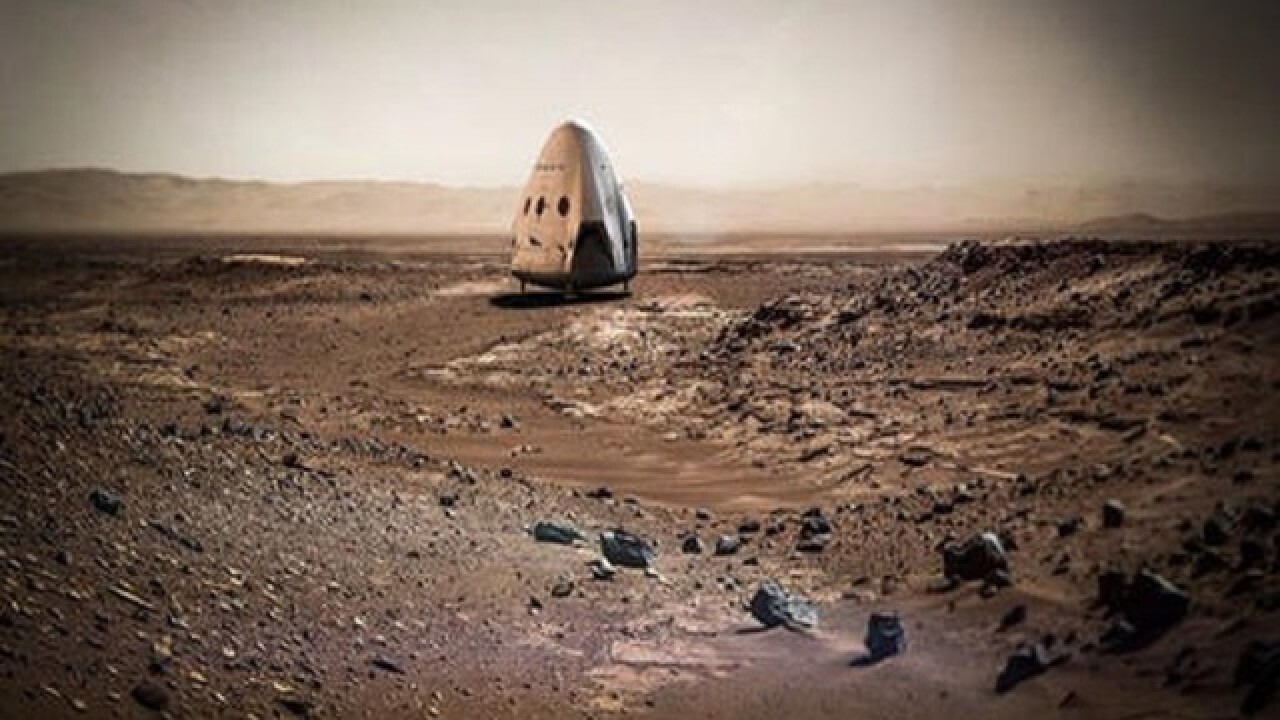 <p>This artist rendering provided by SpaceX shows a Dragon capsule sitting on the surface of Mars. SpaceX is shooting for Mars. The company's billionaire founder and chief executive Elon Musk says he plans to send a Dragon capsule to the red planet as early as 2018. Musk is dubbing his Mars spacecraft Red Dragon. (SpaceX via AP)</p>

CAPE CANAVERAL, Fla. (AP) — SpaceX is shooting for Mars.
Elon Musk, the company's billionaire founder and chief executive, announced Wednesday via Twitter that he plans to send a Dragon capsule to land on the red planet as early as 2018. It would represent a big first step toward his ultimate goal of colonizing the red planet.
The Mars spacecraft will be called Red Dragon, Musk said. No astronauts will accompany Red Dragon on this first test flight. Musk said he wouldn't recommend transporting crews in Dragons beyond the moon; its internal volume is only about the size of an SUV.
"Wouldn't be fun for longer journeys," Musk explained in a tweet.
California-based SpaceX already is using Dragons for space station supply runs, and the company could start flying Americans to the International Space Station by the end of next year.
Musk said the upgraded Dragon is designed to land anywhere in the solar system. The propulsive landing system was tested recently at the SpaceX plant in McGregor, Texas.
Red Dragon would be launched aboard a mightier version of the current SpaceX Falcon rocket that may make its debut at Florida's Kennedy Space Center by year's end.
Additional details on his overall Mars plan will come, Musk promised. After successfully landing a leftover Falcon booster at sea earlier this month, he said he would elaborate on his approach to establishing a city on Mars at an aerospace meeting in Mexico in September.
"I think it's going to sound pretty crazy. So it should be at least entertaining," he told reporters.
Musk maintains that reusing rockets is key to reducing launch costs and, consequently, opening up space. SpaceX now has managed to land a first-stage booster on land, as well as on an ocean platform. The recently retrieved booster could fly again on another satellite mission this summer.
NASA, meanwhile, has its own Mars exploration program, intended to send astronauts there in the 2030s. The space agency contracted out station deliveries in the post-shuttle era in order to focus on that long-term goal.
Shortly after the SpaceX announcement, NASA's deputy administrator, Dava Newman, said the space agency will offer technical support to Musk's company in exchange for Red Dragon descent and landing data from Mars. No money will be exchanged, she stressed.
"Sending astronauts to Mars, which will be one of the greatest feats of human innovation in the history of civilization, carries with it many, many puzzles to piece together," Newman wrote in a blog. "That's why we at NASA have made it a priority to reach out to partners in boardrooms, classrooms, laboratories, space agencies and even garages across our country and around the world."
The window to embark on a Mars mission — whether robotic or human — comes up only every two years because of planetary alignment.
Associated Press 2016