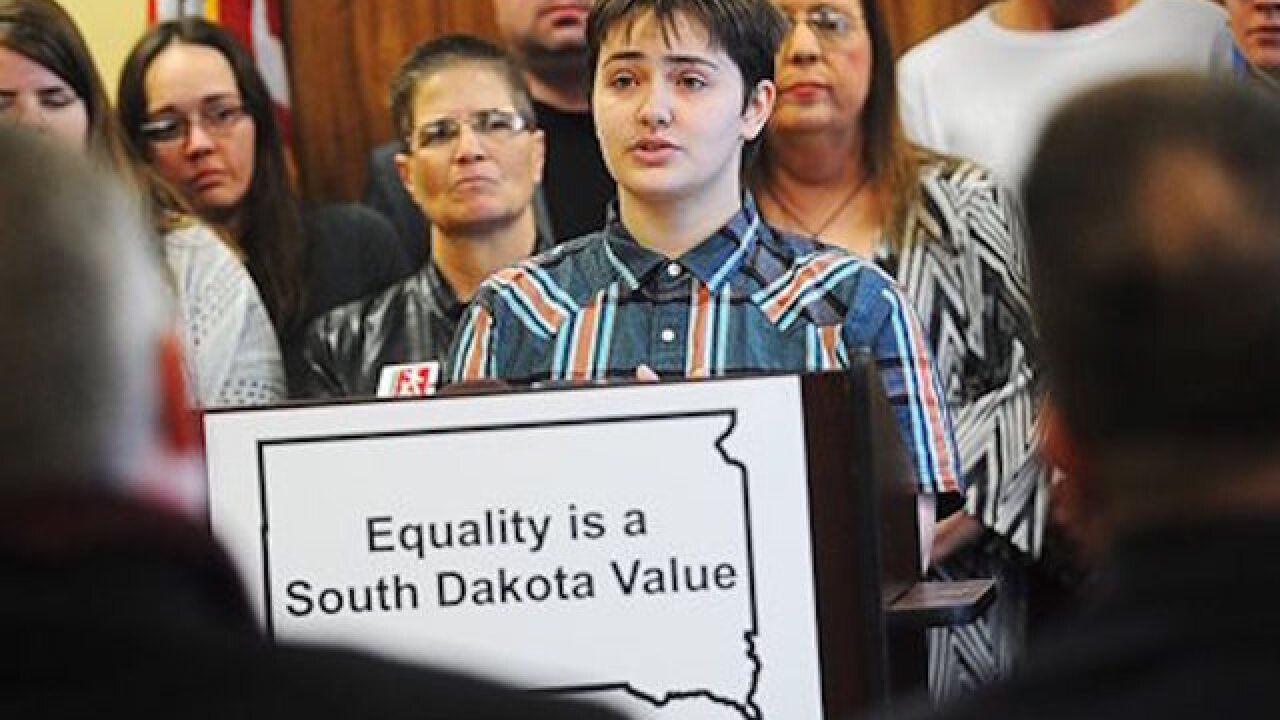 Joe Ahlquist
<p>In this Jan. 29, 2016 photo, Thomas Lewis, an 18-year-old transgender student at Lincoln High School in Sioux Falls, S.D., speaks during a press conference in Sioux Falls against legislation that groups have said would discriminate against transgender people. (Joe Ahlquist/Argus Leader via AP) NO SALES</p>

SAN FRANCISCO (AP) — In clashes over which restrooms and locker rooms transgender students should use, the U.S. Department of Education has warned public schools that a 1970s sex discrimination law makes it illegal to deny them access to the facilities of their choice.

Schools around the country, some fearing federal investigations that could cost them millions in funding, generally have yielded to the guidance. Now, a backlash is brewing.

The South Dakota Legislature last week became the first to pass a bill that would require transgender children and teenagers to use the school facilities that correspond to their "chromosomes and anatomy" at birth. Lawmakers in at least 22 other states have introduced similar legislation at odds with the government's interpretation of the U.S. law, the Human Rights Campaign said in a policy brief Monday.

Gay rights groups are pressuring South Dakota Gov. Dennis Daugaard to veto his state's bathroom access bill while working to stop others from advancing. But with federal courts still considering the issue, and none so far validating the government's reasoning, the statehouse-level defiance could test the limits of the Obama administration's advocacy on transgender rights.

"Local control on this issue has taken a huge, huge hit," said Republican state Rep. Fred Deutsch, the author of the South Dakota legislation. "This bill pushes back against federal overreach and intrusion into our lives, and is an attempt to regain control of something as basic and common sense as privacy rights for our children while at school."

The Education and Justice departments determined in 2013 that transgender students were entitled to federal civil rights protections under its reading of Title IX, the 1972 law that bans sex discrimination in education. The analysis arose from a complaint by a transgender middle school student against a Southern California school district, which agreed to settle the case by updating its policies.

Since then, the Education Department has reaffirmed its position in memos advising school districts of their responsibilities under Title IX and in other complaint resolutions. The most recent was reached in December with a suburban Chicago school district that agreed to allow a transgender high-schooler access to the girl's locker room once private stalls were installed.

"Title IX's sex discrimination prohibition extends to claims of discrimination based on gender identity or failure to conform to stereotypical notions of masculinity or femininity and OCR accepts such complaints for investigation," the department's Office for Civil Rights told districts in a 2014 memo on sexual violence.

The courts so far have been less accommodating. A federal judge last year dismissed a lawsuit brought by a transgender student at the University of Pittsburgh who was expelled for using the men's locker rooms and bathrooms. A federal judge in Virginia also rebuffed a transgender teenager's request for an order requiring his high school to allow him to use the boys' restrooms. Both decisions have been appealed.

Jennifer Smith, an education lawyer in Chicago who represents a number of Illinois school districts, said the lack of legal clarity has left her clients unsure how to craft compliant and thoughtful policies.

"They look at the Pittsburgh case, they look at what OCR has said, they look at state and local laws, and it's really gray. No one knows what to make of it," Smith said. "We are making as practical decisions as we can in a really unsettled area of law."

Gay rights advocates say they will sue to overturn the South Dakota law if the Republican governor doesn't veto it. Though the courts are still weighing school facility use, transgender employees have brought successful sex discrimination claims under the 1964 Civil Rights Act and due process clause of the Constitution, according to Dru Levasseur, who directs the Transgender Rights Project at LGBT legal group Lambda Legal.

"We know that transgender people are protected under federal law, and there seems to be some kind of gap of, 'Well, you are protected but maybe that doesn't apply to restrooms,'" Levasseur said. "You can't live your life if you don't go to the restroom, so there cannot be some kind of separate rule."