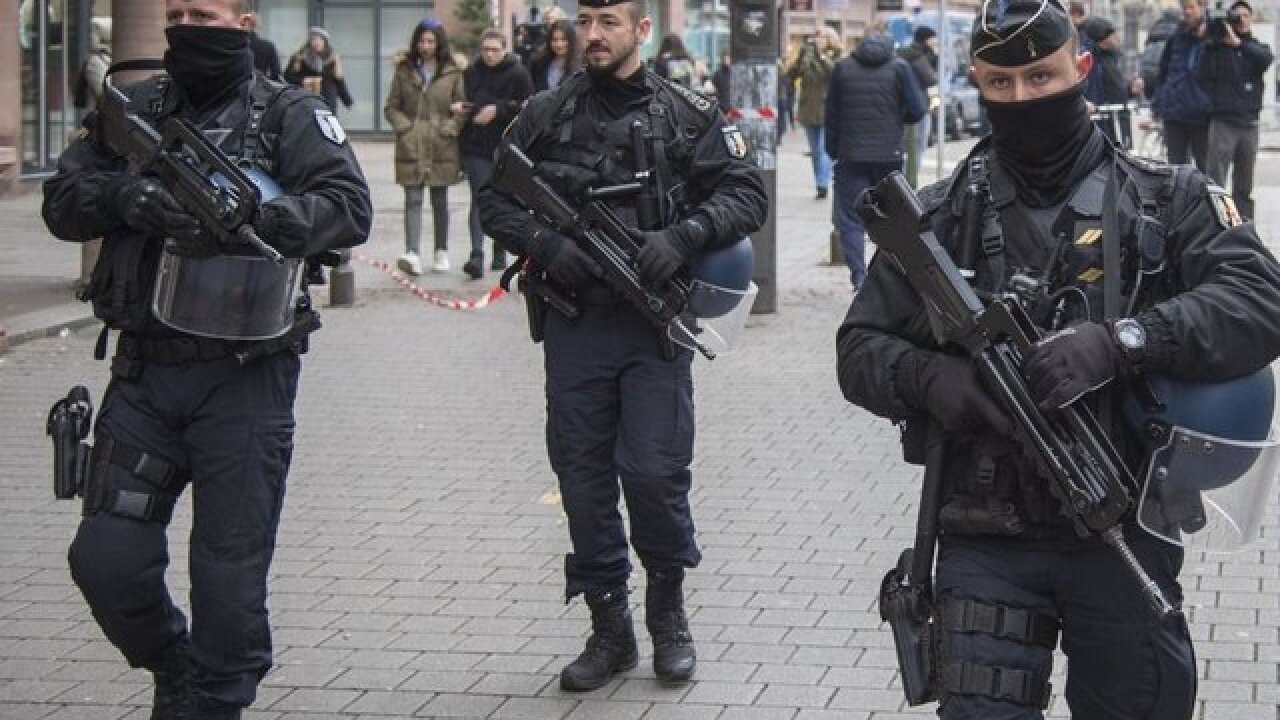 The man responsible for the Strasbourg terror attack was killed by police on Thursday, a spokesman for the Paris prosecutor's office said.

Cherif Chekatt, 29, is accused of killing at least three people and wounding 13 others in the  terrorist attack near the Christmas market  in Strasbourg. French prosecutors said the suspect shouted the Arabic phrase "Allahu Akbar," meaning "God is greatest," at the time of the attack.

He was killed after a two-day manhunt that prompted a curfew in the eastern French city near the German border and forced the country to raise its national security threat level. Hundreds of police and military officers across three European countries were involved in the search.

The French National Police thanked the public for their assistance in finding Chekatt.

"Thank you for your alerts which allowed us to find the wanted individual," the National Police said on Twitter.

Authorities said Chekatt entered the perimeter of the famed market, one of the oldest in Europe, by the city's Corbeau Bridge and started shooting at passers-by on the Rue des Orfèvres around 8 p.m., when many were in the middle of their Christmas shopping.

Anti-terror police flooded the market and tried to arrest the suspected gunman. He exchanged fire with security forces, suffering an injury to his arm. Chekatt used a handgun and a knife to kill people, Paris Prosecutor Remy Heitz said.

The suspected gunman then jumped into a taxi and fled the scene, Heitz said.

Soon after the attack, more than 700 police and military officers across three European countries joined the search and France raised its national security threat level to its highest status: "emergency terror attack."

On Thursday, French police  evacuated buildings and cordoned off the area  where the suspected gunman fled. Chekatt has an extensive criminal background that includes 27 convictions in France, Germany and Switzerland, mostly for acts of robbery and violence.

In 2017, he was deported from Germany to France after the Interior Ministry in the German state of Baden-Wuerttemberg confirmed he had been convicted of break-ins and serious theft in 2016 and spent time in a German prison.

The suspected shooter also was known to prison officials for being radicalized and for his proselytizing behavior in detention in 2015, Paris prosecutor Heitz said, adding that Chekatt had been incarcerated multiple times.

Chekatt was born in Strasbourg, according to CNN affiliate BFM.

He was on a French watch list called a "Fiche S" surveillance file. The "Fiche S" is a French terror and radicalization watch list that includes thousands of people, some of whom are under active surveillance, meaning they are on law enforcement's radar.

Hours before the attack, French gendarmes tried to bring in Chekatt but found he wasn't home, a spokesperson for France's National Police told CNN earlier this week, without providing further details.