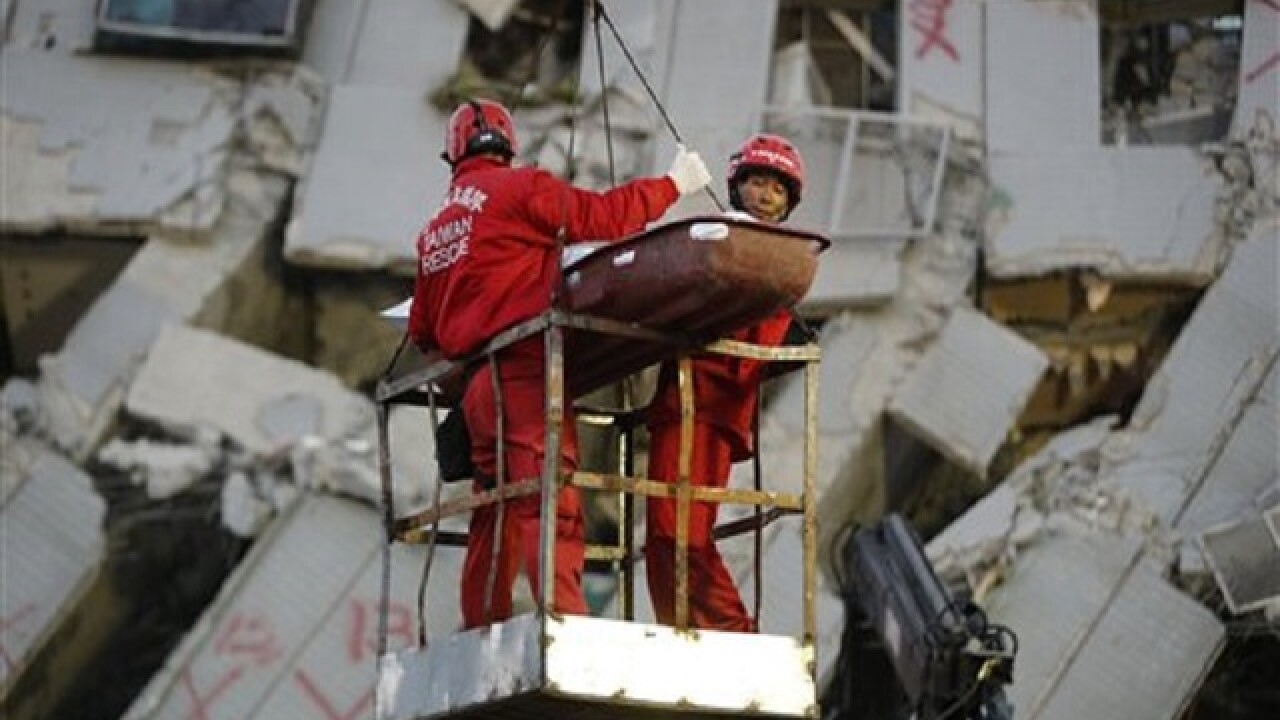 TAINAN, Taiwan (AP) — At least four people, including an 8-year-old girl, were rescued Monday from a high-rise Taiwanese apartment building toppled by a powerful quake two days earlier, as frustration grew among families waiting for searchers to reach their buried loved ones.

More than 100 people are believed to still be under the debris in a disaster that struck during the most important family holiday in the Chinese calendar — the Lunar New Year.

Saturday's quake killed at least 38 people in Tainan city in southern Taiwan, all but two of them in the collapse of the 17-story building. Even though the 6.4-magnitude quake was shallow, few buildings were reported to have been damaged, which experts said was because Taiwan's building standards are high.

Authorities have managed to rescue more than 170 people — the vast majority in the immediate hours after the quake — from the folded building using information about the building layout and the possible location of those trapped.

Five survivors were believed to have been pulled out on Sunday, and at least four on Monday. One of them, Tsao Wei-ling, called out "Here I am" as rescuers dug through to find her, Taiwan's Eastern Broadcasting Corp. reported.

She was found under the body of her husband, who had shielded her from a collapsed beam, the government-run Central News Agency reported. Tsao's husband and 2-year-son were found dead, and five other members of the family remained unaccounted for, it said.

Teams also rescued on Monday a 42-year-old man from the building, and, later, an 8-year-old girl, who had been trapped for more than 61 hours.

"She is awake, but looks dehydrated, lost some temperature but she's awake and her blood pressure is OK," he said. "I asked her if there's anything wrong with her body. She shook her head."

Shortly afterward, rescue workers also pulled out a 28-year-old Vietnamese woman, identified as Chen Mei-jih, who had been trapped on what was the building's fifth floor.

Family members of the missing flooded into the information center in search of their loved ones or to wait anxiously.

Tensions rose as some relatives, losing patience, demanded to speak to rescue workers directly to get the latest information.

A couple sitting in a small room where officials release information said they had heard no news about their son and his family, including their young grandsons.

"Does that mean we are here to wait for bodies?" grandfather Liu Meng-hsun cried out angrily.

Outside, a woman stood at the edge of the rubble shouting, "Your grandma is here!" Rescuers had detected life within the area where the 16th-floor apartment of her son and his family was thought to be, and were said to have heard the sound of a child.

Her son, surnamed Wu, got out of the building soon after the quake, but his wife and their 4-year-old girl remained trapped, according to volunteers assisting the family.

Earthquakes rattle Taiwan frequently. Most are minor and cause little or no damage, though a magnitude-7.6 quake in central Taiwan in 1999 killed more than 2,300 people.

The spectacular fall of the high-rise, built in 1989, raised questions about whether its construction had been shoddy. The government says it will investigate whether the developer cut corners.

Huang Jia-rui, a structural engineer in Tainan, said Taiwan's buildings aren't as quake-proof as Japan's, which is a leader in engineering quake-proof structures, but the island is catching up.

The extended Lunar New Year holiday officially started Monday, but celebrations were subdued and both President Ma Ying-jeou and President-elect Tsai Ing-wen canceled the traditional handing out of envelopes of cash in their hometowns.