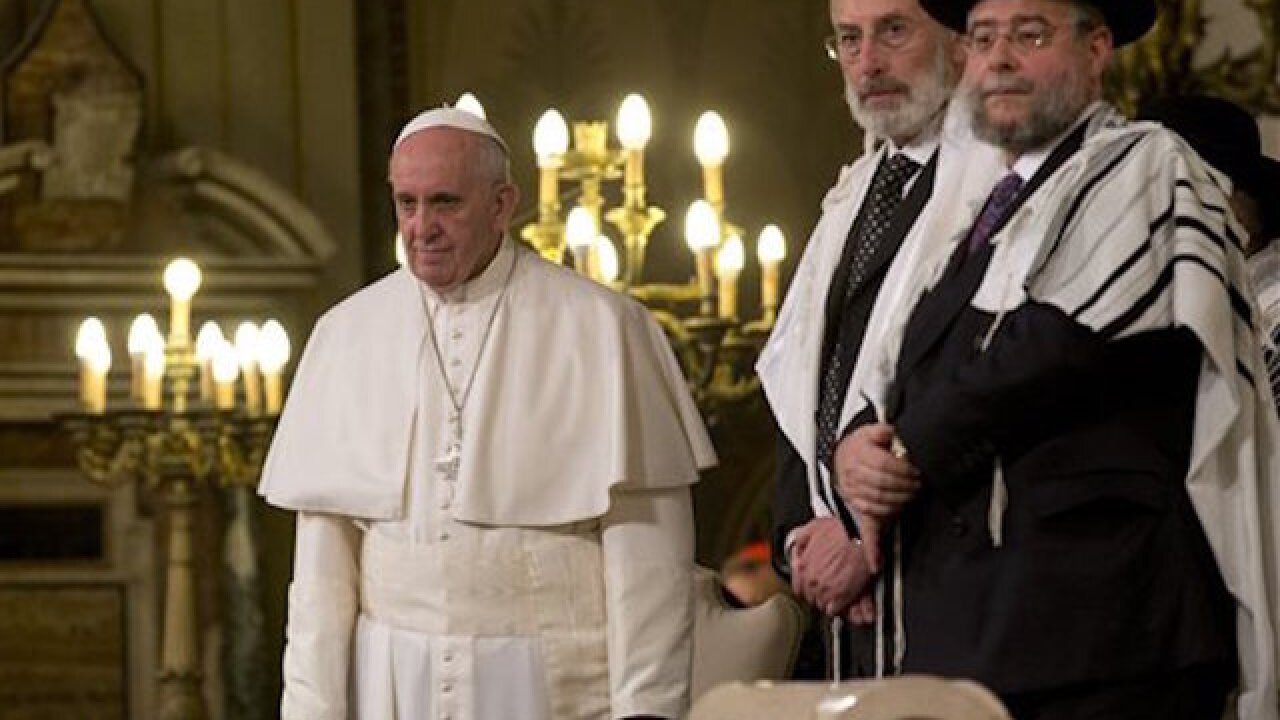 Alessandra Tarantino
<p>Pope Francis, left, flanked by Rabbi Riccardo Di Segni, listens to a chorus at the end of his visit to the Great Synagogue of Rome, Sunday, Jan. 17, 2016. Pope Francis made his first visit to a synagogue as pope Sunday, greeting Rome's Jewish community in their house of worship as his two predecessors did in a show interfaith friendship at a time of religiously-inspired violence around the globe. (AP Photo/Alessandra Tarantino)</p>

ROME (AP) — Pope Francis denounced all religiously inspired violence during a visit to Rome's main synagogue Sunday, joining the oldest Jewish community in the diaspora in a sign of interfaith friendship at a time of Islamic extremist attacks around the globe.

During a visit marked by tight security and historic continuity, Francis also rejected all forms of anti-Semitism and called for "maximum vigilance" and early intervention to prevent another Holocaust.

Francis joined a standing ovation when Holocaust survivors, some wearing striped scarves reminiscent of their camp uniforms, were singled out for applause at the start of the ceremony. And he elicited an ovation of his own when he paused in his remarks to acknowledge the survivors in the synagogue's front row.

The visit comes amid a spate of Islamic extremist attacks in Europe, Africa, the Middle East and elsewhere — violence which Francis has repeatedly condemned as anathema to religion, particularly given that Christians and religious minorities have often been the target.

"Violence of man against man is in contradiction to every religion that merits the name, in particular the three monotheistic religions," Francis said, referring to Christianity, Judaism and Islam. "Every human being, as a creature of God, is our brother regardless of his origins or religious belief."

His sentiments were shared by members of the Jewish community, who sought to hold up the visit as a sign of interfaith friendship in the face of Muslim extremism.

"Today, the sad novelty is that after two centuries of disasters produced by nationalism and ideologies, violence has come back and it is fed and justified by fanatic visions inspired by religion," Rome's chief rabbi, Riccardo Di Segni, told the pope. "A meeting of peace between different religious communities, as the one that is taking place today here in Rome, is a very strong sign against the invasion and abuse of religious violence."

Francis' visit is meant to continue the tradition of papal visits that began with St. John Paul II in 1986 and continued with Benedict XVI in 2010. It also highlighted the 50th anniversary of the revolution in Christian-Jewish relations sparked by the Second Vatican Council, the 1962-65 meetings that brought the church into the modern era.

Among other things, the council document "Nostra Aetate" repudiated the centuries-old charge that Jews as a whole were responsible for the death of Christ.

Francis said the declaration amounted to a "'yes' to the rediscovery of the of the Jewish roots of Christianity and a 'no' to every form of anti-Semitism and a condemnation of every insult, discrimination and persecution that is derived from it."

Francis said several times that Jews were the "elder brothers" of Christians, repeating the words first uttered by John Paul during his historic visit to the synagogue 30 years ago. But he added that Christians also had "elder sisters" in the Jewish faith.

Francis began his visit by laying a wreath at a plaque outside the synagogue marking where Roman Jews were rounded up by the Nazis in 1943 and at another marking the slaying of a 2-year-old boy in an attack by Palestinians on the synagogue in 1982.

He met with members of the boy's family and survivors of the attack before entering the synagogue to rounds of warm applause, which continued during his speech, interrupting him several times.

Francis, an Argentine Jesuit, has a longstanding friendship with the Jewish community in Argentina from his time as archbishop of Buenos Aires. At the same time, recent Vatican developments have displeased some in the Jewish community, including the Vatican's recent treaty negotiated with the "state of Palestine."

Such issues were left unsaid Sunday, though Jewish leaders made clear they would like for the pope and the Vatican as a whole to acknowledge the special link Jews have with the land of Israel.

Francis recalled that during the Holocaust, 6 million Jews were "victims of the most inhuman barbarism, perpetrated in the name of an ideology that wanted to replace God with man."

"The Shoah teaches us that we must have maximum vigilance, to be able to intervene quickly in defense of human dignity and peace."

The comments were notable because Benedict's 2010 visit was marked by his defense of Pope Pius XII, the World War II-era pope accused by many Jews of having failed to do enough to protect Jews from the Holocaust. The Vatican has long maintained that Pius used behind-the-scenes diplomacy in a bid to save Jewish lives.

Francis made no mention of Pius.