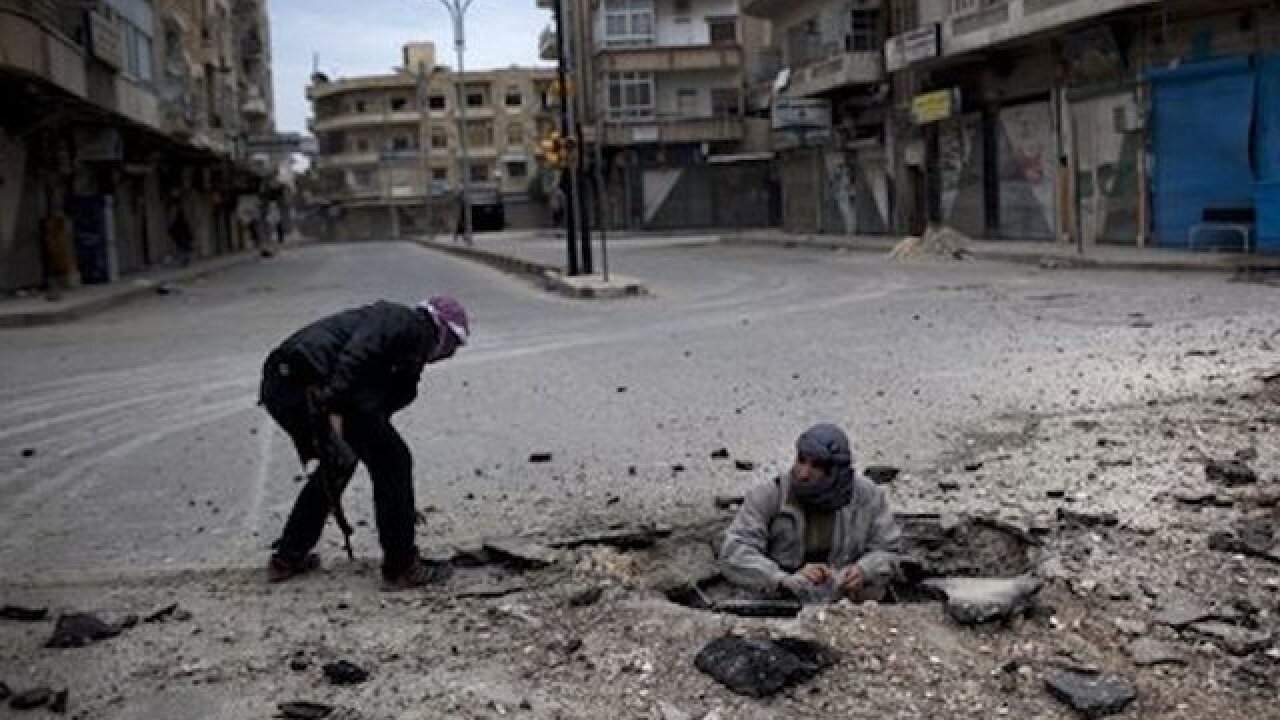 Copyright Associated Press
Rodrigo Abd
<p>In this Sunday, March 11, 2012 file photo, Free Syrian Army fighters plant a roadside bomb to destroy a Syrian Army tank during a day of fierce fighting with the government forces in Idlib, north Syria. The Islamic State group relies on commercially available components for most of its bombs, with some parts coming from as far away as the United States and Japan, according to a report released Wednesday, Feb. 24, 2016 by a London-based arms research group. (AP Photo/Rodrigo Abd, File)</p>

BEIRUT (AP) — Syrian government troops backed by Russian airstrikes recaptured a town in Aleppo province from Islamic State militants on Thursday in a key advance just two days ahead of a U.S. and Russia-engineered cease-fire that is to take effect in Syria.

The town of Khanaser was seized earlier this week by the extremist Islamic State group, cutting government military access to the provincial capital, also called Aleppo, said the Syrian government and the London-based Syrian Observatory for Human Rights, an opposition monitoring group.

SANA said the army took Khanaser, around 50 kilometers (30 miles) southeast of Aleppo city, after three days of heavy battles and that heavy fighting was still underway to reopen the road. On Tuesday, IS seized Khanaser and surrounding hills, severing the government's main land route to the city.

In the push on Khanaser, the Syrian army and pro-government Shiite militias were backed by Russian airstrikes, The Observatory said.

The advance comes ahead of a cease-fire meant to start on midnight Friday. The Islamic State group and al-Qaida's branch in Syria, the Nusra Front, however, are not included in the truce proposed by the United States and Russia.

The cease-fire is aimed at achieving a temporary "cessation of hostilities" that would bring back the Syrian government and its opponents to the negotiating table in Geneva.

The Syrian opposition has agreed to abide by the truce but expressed major concerns and reservations about what it said were ambiguities and the lack of any clear mechanism to implement the agreement.

Davutoglu said the cease-fire would have "no meaning if Russia continues with its irresponsible bombings."

Meanwhile, Turkey's Foreign Minister Mevlut Cavusoglu told state-run Anadolu Agency that Saudi aircraft would arrive "today or tomorrow" at the Incirlik Air Base in southern Turkey to join the fight against Islamic State in Syria. Cavusoglu did not say how many planes Saudi Arabia would be sending to the base.

A key element of the cease-fire deal is humanitarian access to besieged and hard-to-reach areas across Syria. The United Nations announced the first high-altitude airdrop of 21 metric tons of aid Wednesday over the city of Deir el-Zour, which is under siege from Islamic State extremists. But the World Food Program said later it faced "technical difficulties" and indicated the drop may have been off target.

In a further reflection of the complicated terrain across Syria's zigzagging front lines, Davutoglu also warned Syria's main Kurdish militia, a U.S.-backed group that has been fighting the Islamic State, against taking advantage of the truce for actions that threaten Turkey's security.

Turkey would respond to such actions and will not be bound by the cease-fire agreement, the Turkish premier said.

Ankara considers the Syrian Kurdish group, known as the People's Protection Units, or YPG, a terror organization because of its links to Turkey's own Kurdish rebels and has been shelling its positions inside Syria along the border with Turkey. Kurdish officials have called for the group to be added to those excluded from the truce agreement.