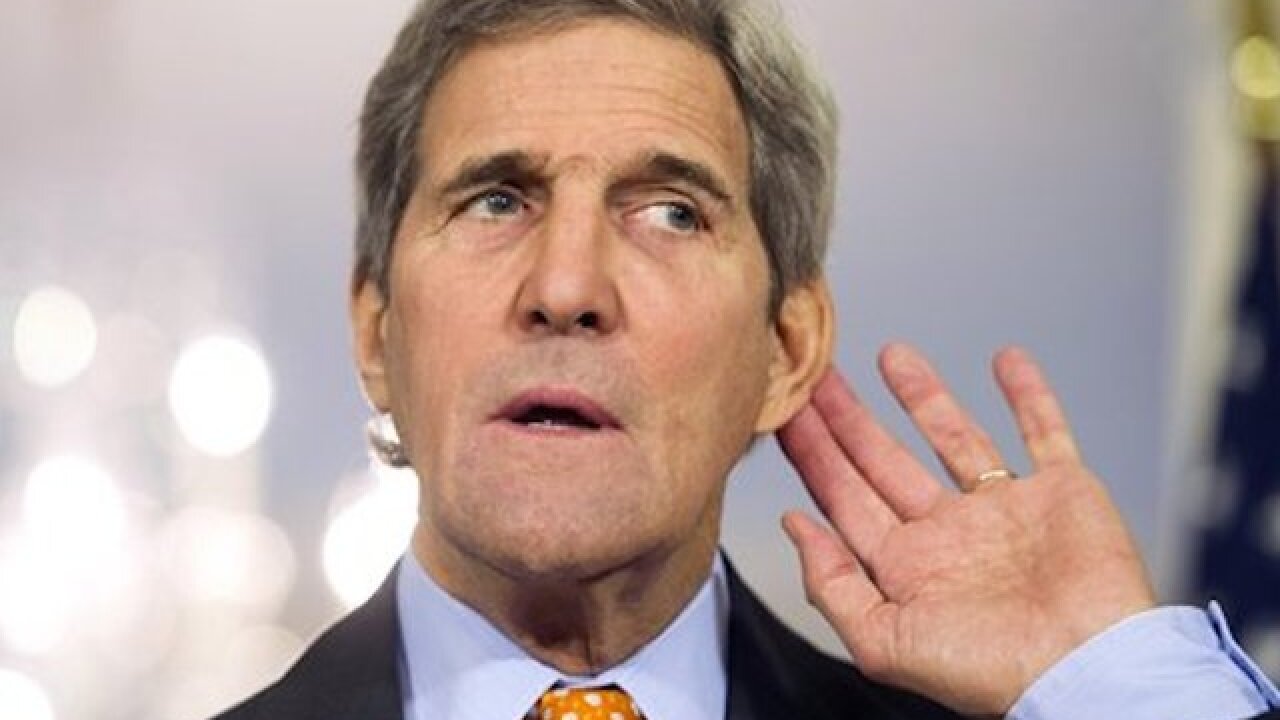 Copyright Associated Press
Cliff Owen
<p>In this Feb. 17, 2016, file photo, Secretary of State John Kerry puts his hand to his ear while listening to a reporter's question at the State Department in Washington. Kerry faces skeptical senators when he appears before a Republican-led panel just a day after the United States and Russia agreed on a new cease-fire for Syria. Kerry is scheduled to testify Feb. 23 before the Senate Foreign Relations Committee amid nagging questions over enforcement of the truce and how violations of the agreement will be handled. (AP Photo/Cliff Owen)</p>

DAMASCUS, Syria (AP) — Syria's government on Tuesday accepted a proposed U.S.-Russian cease-fire that is to go into effect later this week, but reserved the right to respond to any violations of the truce. The main opposition and rebel umbrella group approved the deal but set its own conditions.

The developments followed an agreement between Washington and Moscow for a new cease-fire set to take effect at midnight Friday local time in the 5-year-old civil war, even as major questions over enforcement remain unresolved.

The truce does not cover the Islamic State group, Syria's al-Qaida branch known as the Nusra Front, or any other militia designated as a terrorist organization by the U.N. Security Council.

But exactly where along Syria's complicated front lines the fighting would stop and where counterterrorism operations could continue under the truce is still to be addressed. The five-page plan released by the U.S. State Department also leaves open how cease-fire breaches would be dealt with.

While accepting the proposed truce, the Syrian Foreign Ministry said its operations will continue against IS, the Nusra Front and "other terrorist groups." It also stressed the right of its armed forces "to retaliate against any violation carried out by these groups."

Cabinet minister Ali Haidar said the government will respect the cease-fire in principle, although he could not "speak on behalf of the armed groups."

"Violations will happen from other parties and not from the Syrian state's side," Haidar told The Associated Press after talks in Damascus with Peter Maurer, the president of the International Committee of the Red Cross.

However, Talal Sillo, a spokesman for the predominantly Kurdish Syria Democratic Forces, told the AP that his group will not abide by the truce because it's fighting against the Islamic State group in northern Syria.

U.S. Secretary of State John Kerry said won't vouch for the success of the agreement but said it's the best pathway for ending the bloodshed.

"I'm not going to say this process is sure to work because I don't know," Kerry testified in Washington before the Senate Foreign Relations Committee.

The Russian military said it has set up a coordination center to help enforce the cease-fire. The center is located at Syria's Hemeimeem air base, which hosts Russian warplanes, said Defense Ministry spokesman Maj.-Gen. Igor Konashenkov, adding that it was established in line with the U.S.-Russian agreement.

Its purpose, Konashenkov said, would be to help organize cease-fire negotiations between the Syrian government and the opposition. Russia has given out its hotline numbers for enforcing the truce to the U.S., he added.

Some Syrians in the northern town of Qamishli expressed skepticism that the truce would hold.

"If the international community had wanted to stop the bloodshed, the killing and shelling, this could have happened three or four years ago," Bakr Safir told the newsgathering Arab agency Arab24.

U.N. envoy Staffan de Mistura halted the latest Syria talks in Geneva on Feb. 3 because of major differences between the two sides, exacerbated by increased bombings and a large-scale government offensive near the northern city of Aleppo.

It was not immediately clear if de Mistura will set a new date for the talks, initially scheduled to resume Thursday. He was quoted last week by the Swedish newspaper Svenska Dagbladet as saying they won't resume Feb. 25 because he cannot "realistically" get the parties back to the talks by then.

A new humanitarian aid convoy of 44 trucks entered the besieged Damascus suburb of Moadamiyeh, Syria's state news agency SANA reported Monday. The delivery was supervised by the Syrian Arab Red Crescent and the U.N., it said.

The U.N. humanitarian agency confirmed the delivery. Spokesman Jens Laerke of the U.N. Office for the Coordination of Humanitarian Affairs said the shipments were under way to help about 20,000 people in Moadamiya and another 10,000 in Kfar Batna.

The latest distribution of aid came as Maurer, the ICRC president, began a five-day visit to Syria — his fourth since taking office in 2012.

"This is a critical situation at the present moment with millions of people in need," he said.

The Islamic State captured the northern town of Khanaser, cutting supply lines for government forces between Aleppo and central and western Syria. The militants also seized 12 surrounding hills, the Britain-based Syrian Observatory for Human Rights said. The Aamaq news agency, which is affiliated with IS, also reported the extremists were in "full control" of the town southeast of Aleppo.

The Observatory said 35 troops and 16 IS fighters were killed, with many wounded.

The Observatory, which tracks Syria's civil war, said it has documented 271,138 deaths since the conflict began in 2011. But the actual death toll is estimated by the activist group to be about 100,000 higher than that, based on lists of names of the dead.

The U.N., which last released a death toll several months ago, says the war has killed 250,000 people.