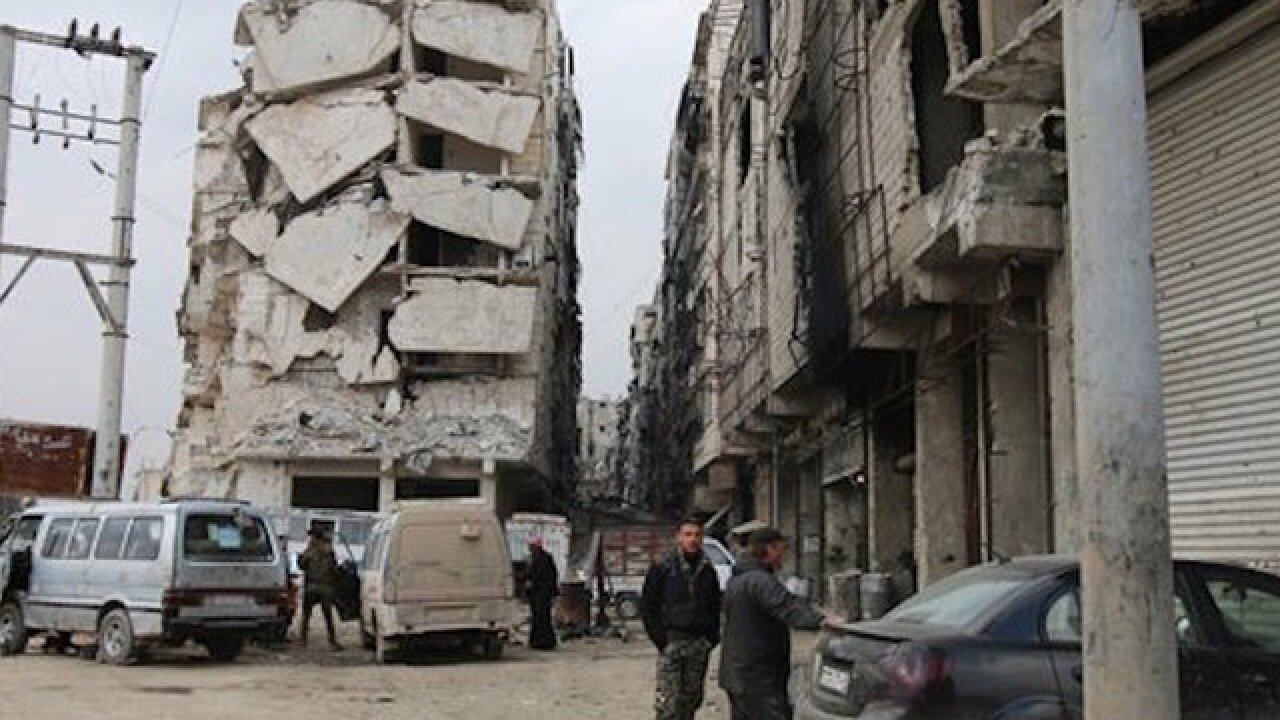 Copyright Associated Press
Alexander Kots
<p>In this Thursday, Feb. 11, 2016 photo, a building is seen with heavy damage in Aleppo, Syria. The fighting around Syria's largest city of Aleppo has brought government forces closer to the Turkish border than at any point in recent years, routing rebels from key areas and creating a humanitarian disaster as tens of thousands of people flee. (Alexander Kots/Komsomolskaya Pravda via AP)</p>

Syrian troops have been advancing under cover of Russian airstrikes with the aim of besieging rebel-held parts of Aleppo, Syria's largest city. If they are able to do so, it will be the biggest defeat for insurgents since the conflict began in March 2011.

After capturing Tamoura, the troops still have to take several more villages and towns, including Hayan, Anadan, Hreitan and Kfar Hamra, in order to completely encircle the Aleppo rebels.

Hezbollah-run Al-Manar TV said troops are now overlooking the town of Hayan and parts of Anadan. The Lebanese militant group is fighting alongside forces loyal to Syrian President Bashar Assad.

Al-Manar later aired live footage from an area overlooking Anadan in which Syrian troops were heavily pounding the area with artillery shells and white smoke could be seen billowing from several spots on the open area. Al-Manar has a reporter embedded with Syrian troops in Aleppo province.

To the north, warplanes carried out more than 20 air raids on the town of Tel Rifaat, a stronghold of the powerful ultraconservative Ahrar al-Sham group, according to the Observatory and activist Amer Hassan who is currently in the nearby town of Azaz. Tel Rifaat is about 15 kilometers (9 miles) from the border with Turkey.

"Today is one of the worst days since the revolution began," said Hassan via Skype, adding that activists counted 46 air raids on Tel Rifaat alone Saturday. "We have not seen such intense air raids before."

He added that Tel Rifaat is one of the biggest strongholds for militants in Aleppo province adding that "if Tel Rifaat falls it means that all northern parts of Aleppo will follow."

Saturday's fighting came a day after the United States and Russia announced a plan to halt the violence within a week, but it's unclear whether fighters on the ground will adhere to it.

In another development, Turkish troops fired artillery shells at areas in northern Syria that are held by Syrian Kurdish fighters.

The Observatory said the artillery strikes targeted the village of Malkiyeh and the Mannagh air base, which was captured by Kurdish fighters and their allies earlier this week. Hassan, the activist in Azaz, confirmed that Turkish troops have shelled the air base.

A Turkish Foreign Ministry spokesman told The Associated Press that he had no information on the cross-border shelling. Turkish troops have bombarded areas under the control of Syria's main Kurdish military, the People's Protection Units or YPG, multiple times in the past.

Turkey says the YPG is affiliated with the Kurdish PKK movement, which has waged a long and bloody insurgency in southeast Turkey.

Earlier in the day, Turkey's Prime Minister Ahmet Davutoglu said that in the event of any threat toward Turkey, "we would have no qualms about taking the same measures that we take (against the PKK) in Iraq."

Also Saturday, an official with the rebel Army of Islam group that controls areas near Damascus said that they killed scores of soldiers on Feb. 7, when they ambushed an army force that was trying to infiltrate into Tel Soran near the Damascus suburb of Douma.

The Observatory said last Sunday's attack killed 76 government troops adding that 45 were killed in the ambush and another 31 died after entering a mine field.

Syria's five-year war has killed 250,000 people, wounded more than a million and displaced half the country's population.

In the suburbs of Damascus, the Syrian Arab Red Crescent transported four trucks of aid into an area on the edge of Douma. Operations Director at the SARC Hazem Baqleh said the supplies included baby formula and medicine for people suffering from chronic diseases.