Detroit schools to reopen on Wednesday 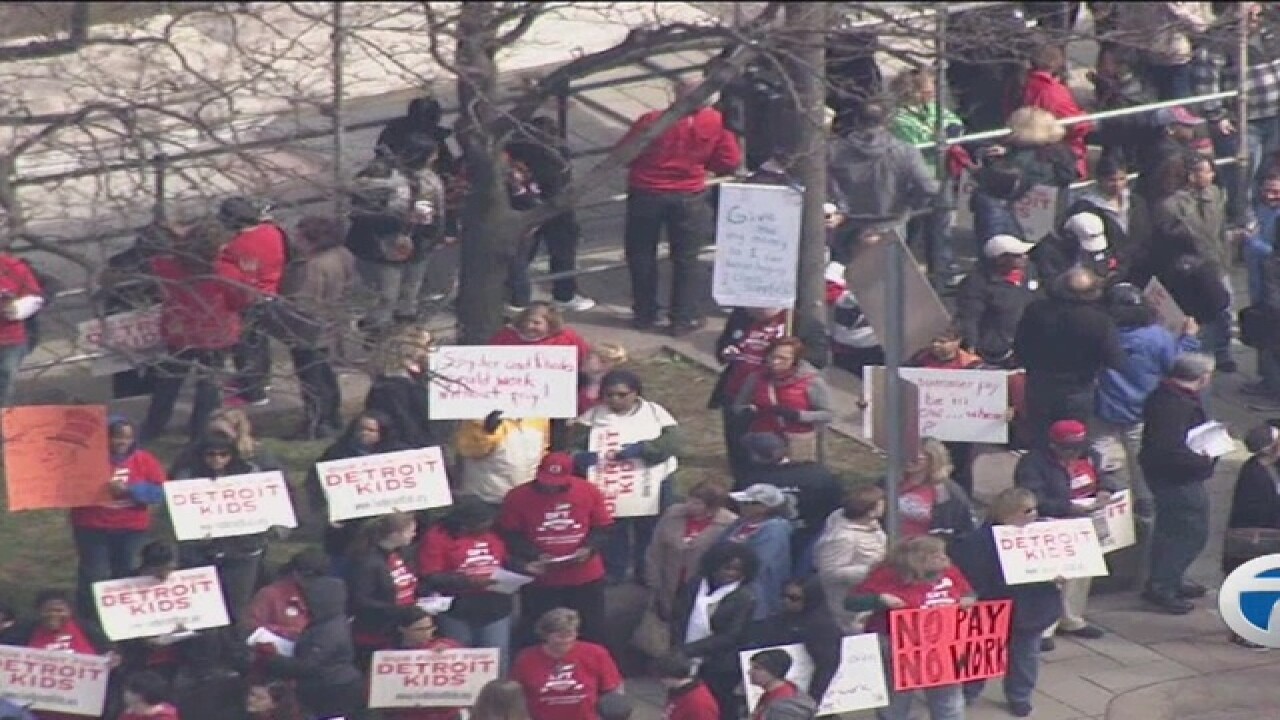 Teachers will be back in the classroom in Detroit Wednesday after a deal with Detroit Public Schools, according to the Detroit Federation of Teachers.

The American Federation of Teachers released the following statement regarding the deal.

After two days of being locked out of their schools, the Detroit Public Schools’ transitional manager today gave teachers and school employees the assurance they needed that they will be paid for their work.

At a membership meeting late this afternoon, the Detroit Federation of Teachers encouraged the school employees to go back to school on Wednesday.

DFT Interim President Ivy Bailey received a letter with the assurance from Judge Steven Rhodes, the transitional manager for DPS.

“We’ve been working 24/7 to secure the assurance that educators will be fully paid for the school year, so they can go back to the classroom and do what they love to do—teach their students. It is a fundamental right to be paid for the work one does. Anything other than that is dead wrong and tantamount to wage theft,” said American Federation of Teachers President Randi Weingarten.

Over the weekend, the DFT heard a rumor that the school system would not guarantee educators at least some salaries from as early as April 28 through June. This would especially affect the people who have their pay spread across 26 weeks of the year—about two-thirds of the city’s 3,800 educators.

“It’s astonishing that teachers and other school employees have been working diligently to educate our kids in under-resourced schools with deplorable conditions, yet they had to fight to get what they’re due. That’s adding insult to injury,” Bailey said. “We’re happy to return to the classroom and finish the school year with our kids.”
Weingarten noted the irony that today is national Teacher Appreciation Day. “At the very least, teachers must be paid for the work they do.

Real appreciation would be to fully fund Detroit Public Schools, return the schools to local control, provide a process for accountability and transparency, and start the new school year with the resources and supports needed to help all kids succeed,” Weingarten said.

Weingarten thanked Detroit Mayor Mike Duggan, Judge Rhodes and others, including Gov. Rick Snyder, for their help in securing the assurance of payment.

Earlier on Tuesday, the Head of the House Appropriations committee had a message for teachers Tuesday as he started the committee’s meeting.

But, that doesn’t mean Republican lawmakers supported the protests that closed schools.

They listened to American Federation of Teachers-Michigan spokesperson Julie Rowe describe what was behind the protests in which most teachers called in sick to work.

“Last Thursday was the last day of paid work for teachers in Detroit that they were guaranteed because of cash flow in the state. Without guarantee of pay, we were locked out,” said Rowe.

It got interesting as lawmakers debated legislation that would provide an emergency loan of $33 million to address payroll issues, plus provide $500 million to created a new district. No one seemed to have evidence indicating either amount was enough money to solve the problem.

“We need to get the right answer and a guarantee of that money in order for teachers to be confidant they will be compensated for the work that they do,” said Rowe.

“Is there anyway we can get accurate information?” asked Rep. Brian Banks (D-Detroit).

The answer? No. Not before you vote.

Rep. Pscholka said there are many times when they have to act with the information they have, knowing they don’t have all the information.  They needed to send a message to teachers they were funding DPS enough to make payroll.

Detroit Representative Brian Banks said it is evidence a forensic audit needs to be done. He called for one. That idea got shot down by committee Republicans- who say it is costly and unnecessary.

“I’m outraged,” said Banks. “We have colleagues who say they believe in transparency. DPS has been under Emergency Management for 14 years. It is time we hold them accountable.”

The committee then voted to approve legislation calling for the $33 million loan, the $500 million in funding to restructure and create a new district with strings attached.

The legislation also allows uncertified teachers to work in Detroit, could throw out teacher contracts as it creates a new district, and delays local control.

"If you believe this about improving educational quality in the City of Detroit, you are dead wrong. It is about money. power, and control,” said Rep. Harvey Santana (D-Detroit).

“They are putting a Band Aid on a bullet hole,” said Rep. Fred Durhal III (D-Detroit).

The full house will now have to take on this legislation as well as an alternative plan put together by the Senate.  They could be brought to the House Floor as soon as Wednesday.