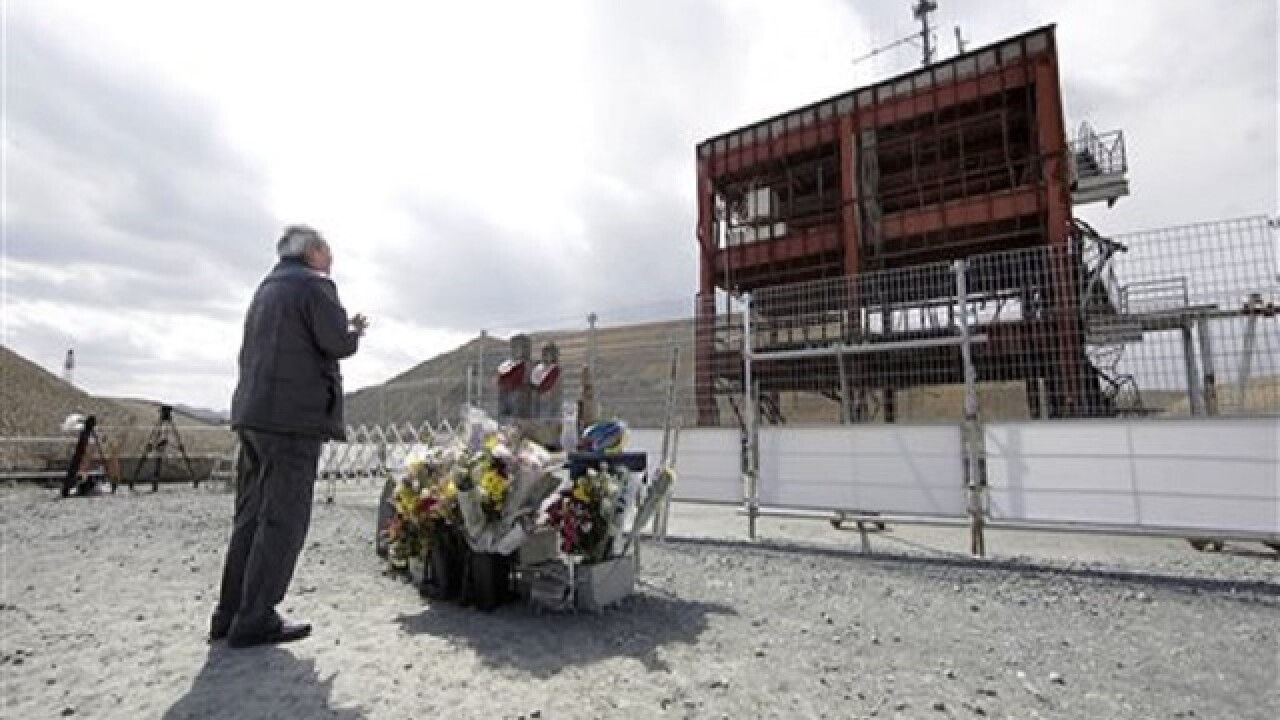 Yusuke Ogata
<p>A man prays in front of the skeletal remains of the former disaster prevention center in Minamisanriku, Miyagi prefecture, northern Japan Friday, March 11, 2016. Japan on Friday marked the fifth anniversary of the 2011 tsunami that killed more than 18,000 people and left a devastated coastline along the country's northeast that has still not been fully rebuild. (Yusuke Ogata/Kyodo News via AP) JAPAN OUT, MANDATORY CREDIT</p>

MINAMISANRIKU, Japan (AP) — Japanese gathered in Tokyo and along the country's ravaged northeast coast to observe a moment of silence at 2:46 p.m. Friday, exactly five years after a magnitude 9.0-earthquake struck offshore and triggered a devastating tsunami that killed more than 18,000 people.
Some teared up as they held hands or bowed their heads in prayer as sirens sounded on a chilly afternoon in northern Japan. Japanese Emperor Akihito, Empress Michiko and Prime Minister Shinzo Abe, all in formal wear, led an annual ceremony in Tokyo attended by officials and survivors.
"Many of the people affected by the disaster are aging, and I worry that some of them may be suffering alone in places where our eyes and attention don't reach," Akihito said. "It is important that all the people keep their hearts together so that not a single person still in difficulty is overlooked and they can return to normal life as soon as possible."
About 180,000 people remain displaced, while reconstruction work continues, including many reluctant to return to homes near the Fukushima nuclear power plant, which spewed radiation after being hit by the tsunami. Much of the disaster-hit Tohoku coast remains empty except for huge mounds of dirt brought in to raise the ground level to minimize risks from future tsunamis before any rebuilding.
Abe acknowledged that many people are still struggling, but said "reconstruction is steadily making progress, step by step, with housing being rebuilt and jobs regained."
His Cabinet formerly approved a new 6.5 trillion yen ($57 billion) five-year reconstruction plan through 2020 to speed up construction of public housing for evacuees, and for medical care, infrastructure, tourism promotion and other projects.
Early in the day, a handful of tourists in the town of Minamisanriku offered prayers at the skeletal remains of the former disaster prevention center, where 43 workers died as tsunami waves engulfed the three-story building.
Nobuhito Akima, a businessman visiting for the first time from Tokyo, said the vast lands seem almost too clean. "I don't intend to say what's right or wrong regarding the reconstruction, but I also feel like I can't really tell where all this reconstruction is heading," he said.
Masaki Kamei, a doctor from Tokyo who has been visiting disaster-hit areas every year, senses life is coming back.
"What's different this year compared to last year is fishermen have already gone out fishing by dawn ... and towns are already bustling about going on with their business," he said. "There is an expression: the hammering sound of reconstruction. That's how I feel, I sense the emphasis has shifted."
Abe has pledged to bolster reconstruction efforts ahead of the 2020 Tokyo Olympic Games, setting ambitious goals to reopen a damaged coastal railway in Fukushima by 2020 and triple tourism in the north. His government also hopes to reopen all evacuation zones near the nuclear plant by next March, except for the dangerously contaminated immediate surroundings.
Residents of disaster-hit regions have criticized the government for rushing the reconstruction to showcase Fukushima's safety for the Olympics rather than for the residents.
Abe also has said he also wants to triple the number of foreign visitors to the Tohoku region to 1.5 million in 2020 so that tourists can see the reconstruction "through their own eyes."
Associated Press 2016