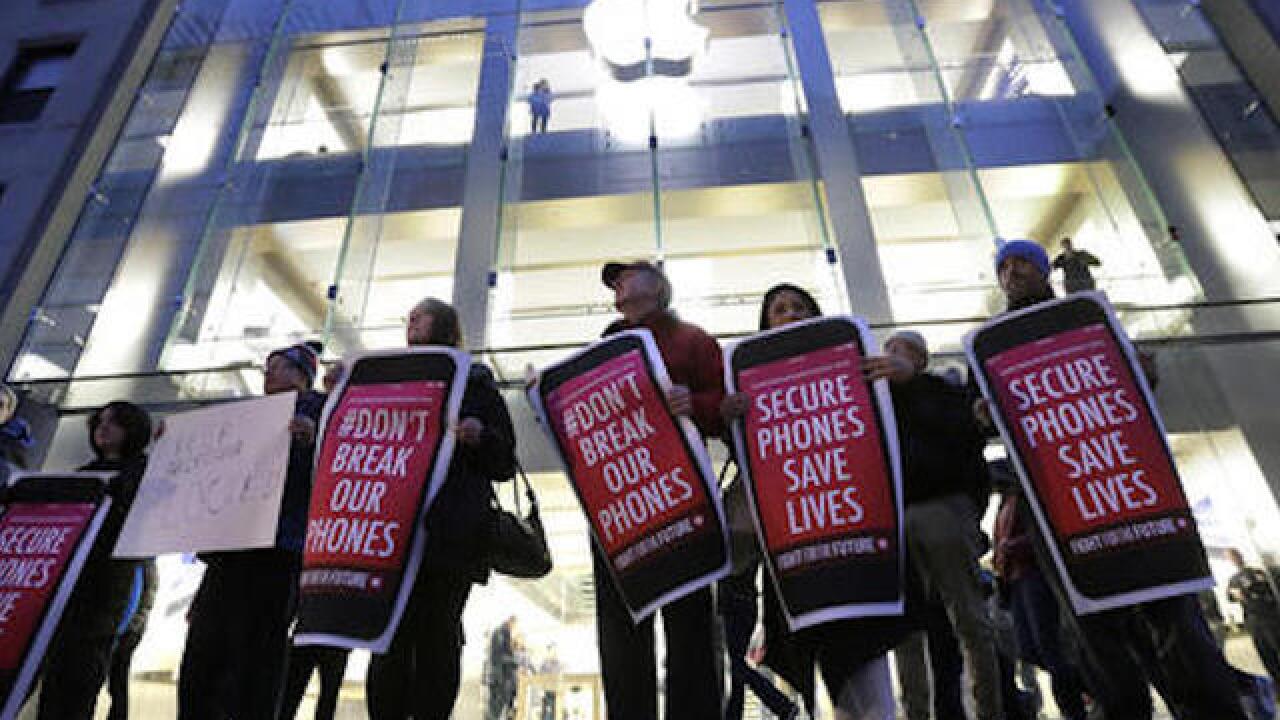 SAN FRANCISCO (AP) — From security experts worried about hacking to independent app-makers who fear more burdens on their business, a slew of tech industry groups and civil liberties advocates are filing court documents backing Apple in its fight with the FBI.

Several police groups, meanwhile, filed briefs in support of federal authorities who are seeking Apple's help in hacking an encrypted iPhone used by Syed Farook, one of the San Bernardino mass shooters. The so-called "friends of the court" briefs come in advance of a March 22 hearing in which Apple is asking U.S. Magistrate Sheri Pym to reverse an order requiring Apple to create a software program that over-rides iPhone security features, so authorities can try to unlock the encryption by guessing the phone's passcode.

Among those backing Apple in the dispute are some of its biggest competitors, including Google, Microsoft and Facebook. Though some were initially hesitant about seeming to oppose an investigation of violent extremists, they have signaled that they'll file a joint brief on Apple's behalf. A group of 17 smaller tech firms, including Twitter, LinkedIn, Airbnb and Reddit submitted a separate joint filing.

Many, but not all, of the filings rehash arguments made by Apple itself in a court filing last week, saying the judge's order is unprecedented and over-reaches current law. For instance, a group of cryptographers and security experts warned in their brief that forcing Apple to write software that overrides iPhone security features would produce a dangerous new tool that itself would be vulnerable to theft or hacking.

An organization of app makers, meanwhile, argued that the order would create untenable burdens for smaller tech companies and software developers who might be asked to create similar programs for their own products.

"If the government prevails, then this case will be the first of many requiring companies to degrade the security and to undermine the trust in their products so essential to privacy in the digital age," attorneys for the American Civil Liberties Union warned in their brief, adding that the precedent would implicate "the security and privacy of hundreds of millions of Americans."

Security experts argued the government's request is not as simple as it sounds. Any new software code is likely to have unexpected bugs that could be exploited by hackers, according to a brief from Stanford computer scientist Dan Boneh, cryptologist Bruce Schneier, independent researcher Jonathan Zdziarski and four others.

"The security bypass this court would order Apple to create almost certainly will be used on other iPhones in the future," they warned. "This spread increases the risk that the forensic software will escape Apple's control either through theft, embezzlement, or order of another court, including a foreign government."

Meanwhile, the app-makers trade group, known as ACT, noted that Apple has said it would take "between six and ten" engineers to create the software. A similar demand "would be exceptionally onerous for the small companies that constitute the majority of ACT's members and that are the heart of the mobile economy," the group argued.

Another trade group warned the order would undermine public confidence in "the integrity of the Internet." The Computer and Communications Industry Association said its members invest heavily in technical measures to protect customers' information against theft by criminals and hackers backed for foreign states.

CCIA members include Google, Facebook, Amazon and Microsoft — but not Apple. The association has been at odds with Apple over various policy issues such as disputes over technology patents. But an official said the organization believes Apple's position is right for the industry and the country.

The groups are worried about the potential "cascading rippling effects ... on the everyday investigation, prosecution and enforcement of the laws" that would come with a ruling in favor of Apple, said attorney Joseph V. DeMarco.

Calling Apple's position dangerous in their brief, the groups said they're also concerned about the message that could be sent to citizens, who are expected to provide "reasonable assistance to law enforcement as they investigate crimes," DeMarco said.