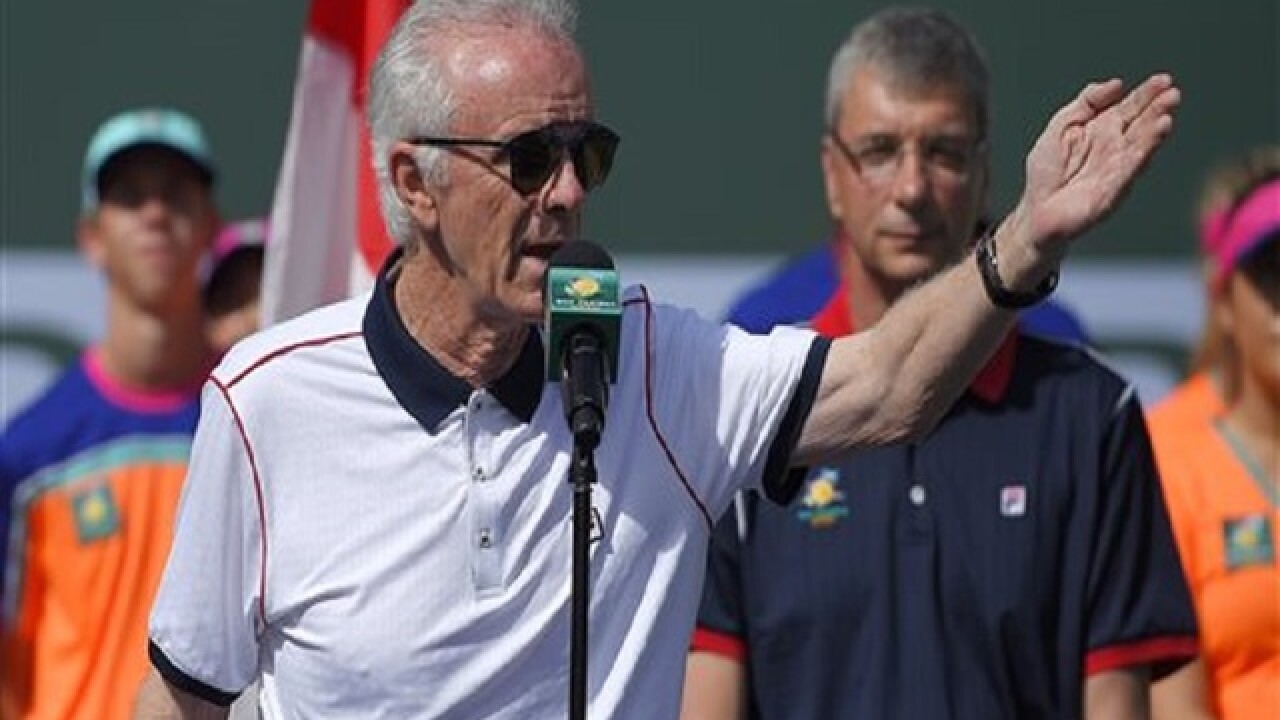 LOS ANGELES (AP) — The tournament director of the BNP Paribas Open who said women's pro tennis players "ride on the coattails of the men" resigned Monday night.
Tournament owner Larry Ellison said in a statement that Raymond Moore was quitting as chief executive officer and tournament director of the $7 million event featuring men's and women's players in the California desert. Moore informed Ellison of his decision when they spoke earlier in the day.
"Ray let me know that he has decided to step down from his roles as CEO and tournament director effective immediately," Ellison said. "I fully understand his decision."
A tournament spokesman could offer no further details on Moore's resignation, citing only Ellison's statement.
Moore apologized after he was roundly criticized by executives from the women's and men's pro tours, players Serena Williams and Victoria Azarenka and on social media for his comments Sunday.
The 69-year-old former touring pro from South Africa has been CEO of the tournament since 2012. In the event's early years, Moore and fellow ex-player Charlie Pasarell started PM Sports Management, which oversaw the tournament as it expanded.
"In my next life when I come back I want to be someone in the WTA because they ride on the coattails of the men. They don't make any decisions and they are lucky. They are very, very lucky," Moore said. "If I was a lady player, I'd go down every night on my knees and thank God that Roger Federer and Rafa Nadal were born, because they have carried this sport."
He also referred to women's players as "physically attractive and competitively attractive." Moore later apologized, calling his comments "in extremely poor taste and erroneous."
"I am truly sorry for those remarks, and apologize to all the players and WTA as a whole," the statement said. "We had a women's final today that reflects the strength of the players, especially Serena and Victoria, and the entire WTA. Again, I am truly sorry for my remarks."
Moore clearly had no intention to leave his post based on comments he made to reporters Sunday on the last day of the two-week tournament. Before the backlash over his controversial comments began, he was asked how long he planned to remain in charge.
"Firstly, I love what I'm doing. I'm passionate about it. I enjoy it," Moore said. "Who knows who the face of the tournament will be down the road. But I don't think that, oh, I'm going to stop next year or three years."
Ellison, a billionaire and executive of Oracle Corp., credited Billie Jean King, Martina Navratilova and Serena and Venus Williams, as well as other female athletes, for their leadership in treating women and men equally in sports.
"I'm proud to say that it is now a decade-long tradition at our tournament at Indian Wells, and all the major tennis tournaments, to pay equal prize money to both the women and the men," Ellison said in his statement.
Ellison thanked the "great women athletes" who fought so hard in pursuit of equal prize money in pro tennis.
"All of us here at the BNP Paribas Open promise to continue working with everyone to make tennis a better sport for everybody," he said.
Associated Press 2016