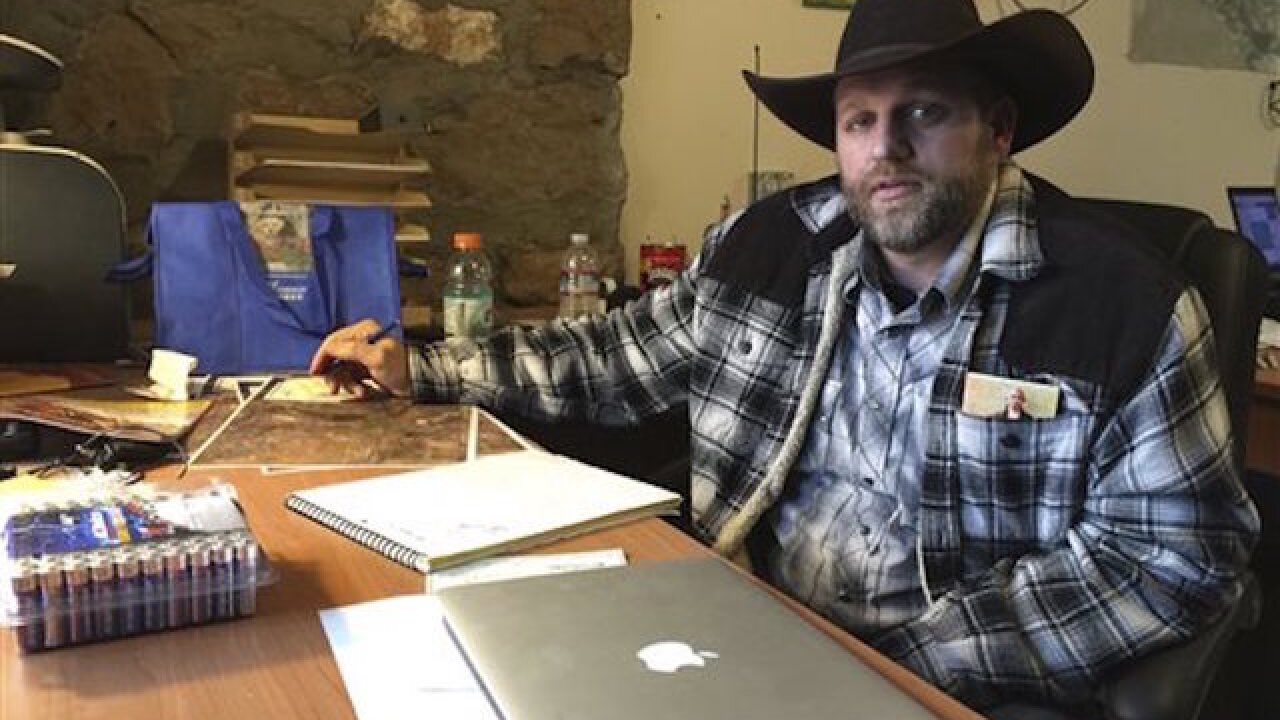 Copyright Associated Press
Keith Ridler
<p>Ammon Bundy sits at a desk he's using at the Malheur National Wildlife Refuge in Oregon on Friday, Jan. 22, 2016. Bundy is the leader of an armed group occupying a national wildlife refuge to protest federal land policies. The leader of an armed group occupying the refuge met briefly with a federal agent Friday, but left because the agent wouldn't talk with him in front of the media. (AP Photo/Keith Ridler)</p>

BURNS, Ore. (AP) — The leader of an armed group occupying a national wildlife refuge in Oregon plans to have a ceremony Saturday for ranchers to renounce federal ownership of public land and tear up their federal grazing contracts.

Midday on Saturday, a small counter-protest gathered on an overlook about five miles from the refuge, chanting for the group to go home.

Kieran Seckling with the Center for Biological Diversity said the leaders of the armed group want to "stage another occupancy like this and to terrorize those towns the same way they have terrorized Burns. There's no town in the west that wants to be the next Burns."

About 40 people gathered for the counter-protest around 1 p.m. in bitter wind and sleet.

Katie Fite from Boise, Idaho, called the occupiers bullies and said their action could give rise to other hate-filled efforts to take over public lands.

On Friday, Ammon Bundy met briefly with a federal agent as authorities attempt to resolve the three-week old standoff over federal land policies, but Bundy left because the agent wouldn't talk with him in front of the media.

The short meeting occurred as Oregon officials are putting increased pressure on federal authorities to take action against Bundy's group.

On Thursday, Bundy went to the airport in Burns, where the FBI has set up a staging area, and spoke to an FBI negotiator over the phone. They agreed to speak again Friday, but Bundy left the airport shortly after he arrived because the FBI agent he spoke with said federal authorities wanted any conversation to be private.

Bundy wants face-to-face conversations in front of reporters. "I really don't think, at this point, even having another phone conversation here without him would be beneficial," Bundy said before leaving Friday.

He also questioned the FBI's authority. "If you haven't got sanction from the sheriff, there's no reason to be talking to you," Bundy said.

A crowd of reporters watched the brief exchange, while state troopers and armed federal agents looked on.

Bundy's group began occupying the Malheur National Wildlife Refuge in eastern Oregon on Jan. 2. The group plans to open the 300-square-mile refuge for cattle this spring.

The FBI did not immediately comment on Friday's meeting with Bundy, but the agency said in a statement Thursday that its response "has been deliberate and measured as we seek a peaceful resolution."

Oregon Gov. Kate Brown said Wednesday that she was angry because federal authorities have not taken action against Bundy's group. The Democratic governor said the occupation has cost Oregon taxpayers nearly half a million dollars.

Brown sent a letter Thursday to U.S. Attorney General Loretta Lynch and FBI Director James Comey, urging them "to end the unlawful occupation of the Malheur National Wildlife Refuge as safely and as quickly as possible."

Bundy, speaking to The Associated Press late Friday while sitting at a desk inside one of the refuge buildings, dismissed the governor's request.

"It just again shows the ignorance of some of our elected officials," he said. "It's just amazing that she would just disregard the Constitution to the point where she would think it would be OK to give the federal government that authority to come in and take some dynamic action or something like that."

Bundy said the governor's comments might have been about politics.

"If they wanted to come get us they would have come got us already," Bundy said.

The group has recently bolstered a front entrance blockade with timbers and set up another checkpoint at a back entrance. The AP was not allowed to enter the area Friday without an escort from an armed militant.

In a statement, U.S. Sen. Jeff Merkley said it was "long past time for this illegal occupation to end and for the people of Harney County to get their lives back."

At community meetings, some local residents have asked Bundy and his group to leave.

Harney County Judge Steve Grasty said in a statement Friday that many locals "are incredulous about the federal government's fear of taking action against the lawlessness that we are witnessing on a daily basis."

Bundy has said he believes his group's work is appreciated by locals. He said the armed men have been "helping ranchers," doing maintenance on the refuge because "it's in a bad shape," and taking care of fire hazards in the refuge's firehouse.

Bundy has also asked the FBI to let two ranchers sent to prison for arson go back home.