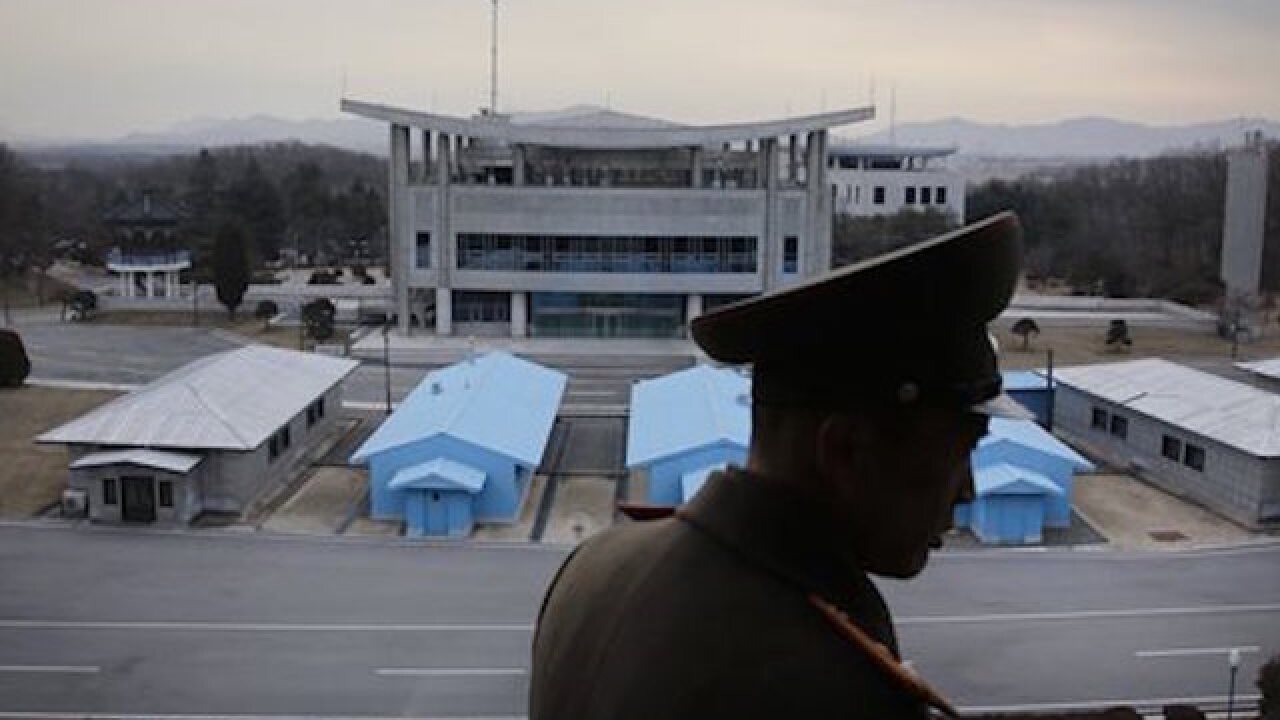 Wong Maye-E
<p>North Korean People's Army Lt. Col. Nam Dong Ho is silhouetted against the truce village of Panmunjom at the Demilitarized Zone (DMZ) which separates the two Koreas on Monday, Feb. 22, 2016, in Panmunjom, North Korea. Nam Dong Ho told The Associated Press that tensions have increased significantly along the Demilitarized Zone since North Korea conducted its nuclear test and rocket launch. He said he could not comment on operational details, but added: "The reality is that it is touch and go." (AP Photo/Wong Maye-E)</p>

PANMUNJOM, North Korea (AP) — Tensions have increased significantly along the Demilitarized Zone since North Korea's recent nuclear test and rocket launch, a North Korean military official told The Associated Press on Monday, adding that while he could not comment on operational details, "the reality is that it is touch and go."

Though parts of the world's most fortified border can seem like a tourist trap, drawing throngs of camera-happy visitors on both sides every year, to the military-trained eye the Cold War-style standoff along the 257-kilometer (160-mile) DMZ — established when the 1950-53 Korean War ended in an armistice, not a peace treaty — is an incident waiting to happen.

That's now truer than ever, the North Korean officer said, as tensions are escalating between Pyongyang, Seoul and Washington. Thousands of U.S. troops are deployed in South Korea and units based around the DMZ have the motto "Be Ready to Fight Tonight."

"People come here and they think it's like a resort. But if you know it better, you know how dangerous it is," Lt. Col. Nam Dong Ho of the North Korean People's Army said in Panmunjom, the truce village where the armistice was signed.

Nam said tensions have increased significantly since the nuclear test in January and rocket launch earlier this month. "Something could happen at any time," he said.

To stand on the North Korean side of the Demilitarized Zone is almost otherworldly.

After crossing through military checkpoints and passing roadside concrete structures rigged to detonate and keep any vehicles from passing — defenses that are also common in the South — the air is peaceful and fresh, and birds can be heard chirping as they fly over a carefully manicured landscape dotted with rock monuments and meticulously maintained historical buildings.

But closer to the Demarcation Line that marks the actual border, soldiers stand rigidly on guard, armed and intimidating, often just a few steps away from their South Korean counterparts.

On Monday, the surreal feeling at the Demarcation Line was heightened by the absence of anyone — soldiers or civilians — visible on the South's side.

South Korea halted tours to its side of the DMZ the day after the Jan. 6 nuclear test, when it also announced it would resume cross-border propaganda broadcasts, which have in the past brought strong recriminations from North Korea. The tours have gradually resumed. A popular observatory where people can catch a glimpse into the North via binoculars was set to reopen Tuesday.

Along with restarting the broadcasts, South Korean President Park Geun-hye responded to the North's nuclear test and launch by shutting down a joint industrial park in Kaesong, a city just north of the DMZ, and telling the South Korean National Assembly that if North Korean leader Kim Jong Un doesn't change his ways his regime will surely collapse — predictably outraging the North.

North Korea reacted by putting the industrial park under military control, cutting off emergency hotlines with Seoul and — through its state-run media — accusing Park of being a traitor and a "senile granny."

"I don't even want to utter her name," Nam said. "I'm just a soldier so I don't know how the situation has changed. But as the Kaesong industrial zone has been totally closed by South Korea, our people and army are getting more enraged."

Nam said the broadcasts cannot be heard in Panmunjom during the day, which he suggested was because the South doesn't want them to be heard by South Korean tourists.

"But when it's quiet, late at night, you can hear them here," he said.

North Korea says it is developing nuclear weapons for self-defense and has the sovereign right to launch satellites as part of a peaceful space program. But both are generally seen as violating longstanding United Nations resolutions. The U.N. Security Council is still discussing its response, but the United States, Japan and South Korea have already announced new sanctions on the already-heavily sanctioned North.

The standoff is likely to get worse before it gets better.

Keeping its own military profile high, the United States flew four stealth F-22 fighter jets over South Korea and reaffirmed it maintains an "ironclad commitment" to the defense of its ally after the rocket launch. Last month, it sent a nuclear-capable B-52 bomber over South Korea following the North's nuclear test.

South Korea and the United States are expected to hold large-scale war games next month.

That is strongly opposed by neighboring powers China and Russia, since the radar would allow Washington to reach well into their territory as well.

Nam, the North Korean officer, said he remains focused on his duties. But he added that, now that North Korea says it has an H-bomb — a claim disputed by some outside experts — the U.S. might be better advised to focus on negotiating a peace treaty to formally end the Korean War.

"On the international stage, the U.S. talks about peace," he said. "But it should not interfere in the affairs of other countries."