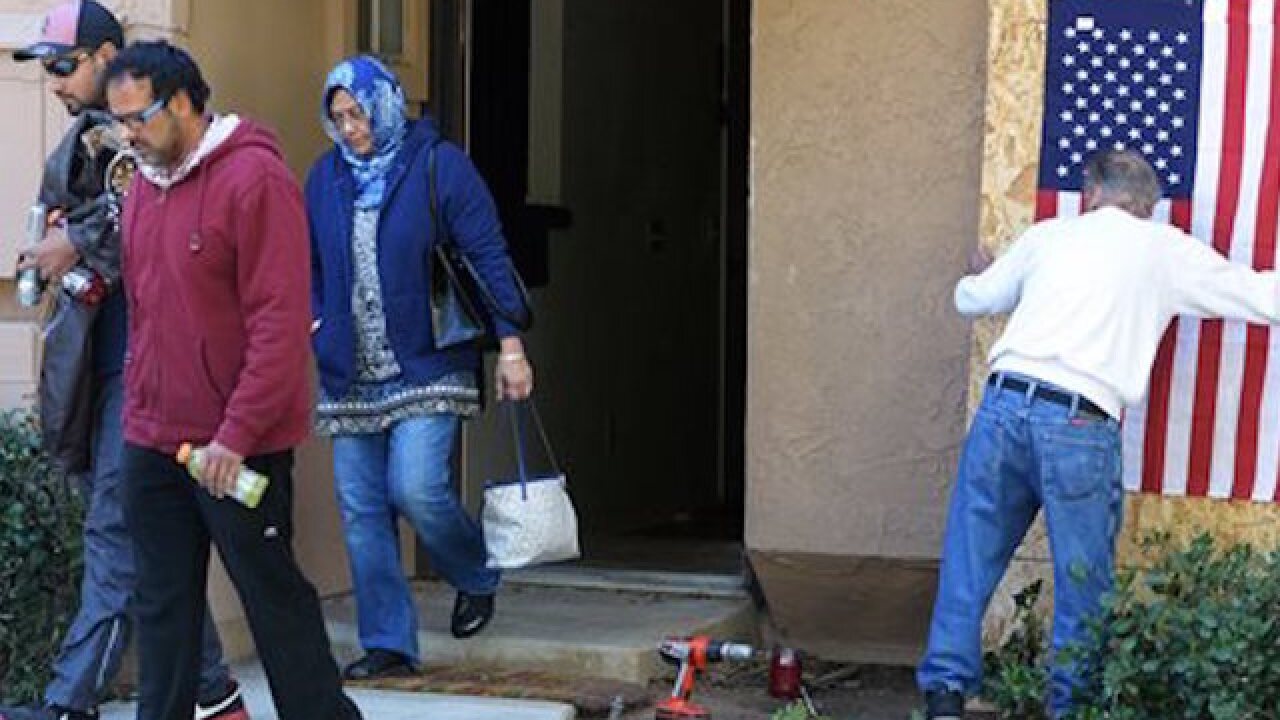 RIVERSIDE, Calif. (AP) — When Rafia Sultana Farook needed help, she often turned to her younger son, a quiet and devout Muslim who the FBI says began veering toward radical ideology while living under her roof.

After filing for divorce and claiming she was abused, Farook relied on Syed Rizwan Farook to help supervise visits between her then-husband and the couple's teenage daughter. When she left her billing job at a California hospital, Rizwan helped her cover expenses.

And when she sold the family's five-bedroom house in Riverside this year, her son welcomed her into the townhome where he lived with his Pakistani bride, Tashfeen Malik, and their newborn daughter in nearby Redlands.

On the morning of Dec. 2, the 28-year-old Rizwan and his wife, 29, left their daughter with his mother, telling her they had a medical appointment, the Farook family's attorneys said. About 11 a.m., they burst into a holiday luncheon attended by many of Rizwan's co-workers in the San Bernardino County public health department and opened fire.

They killed 14 people and hours later were shot to death by police. The FBI has labeled it a terrorist attack, the deadliest by Islamic extremists on American soil since Sept. 11, 2001.

Since the attack, Rafia Farook, 62, has emerged as an obscure figure; someone apparently close to her son, yet according to family attorneys unaware of his plans or that he had been amassing materials that could be turned into bombs.

In the hours that followed the attack, Rafia Farook was detained for questioning and released by authorities. They have not linked her to the attacks.

She declined to speak with The Associated Press when reached by telephone last week.

Farook and her husband, also named Syed, were born in Pakistan, and married on New Year's Day 1982. The couple had two daughters and two sons and lived in Illinois before moving to California and buying a single-family home in Riverside.

Unemployed, the pair filed for bankruptcy in 2002. The next year, Rafia, who had completed two years of college, got a part-time job as a clerk for Kaiser Permanente, earning $16 an hour. She eventually became a full-time biller, earning $23 an hour before leaving in 2013, family court records show.

In 2006, Farook sought a divorce and obtained a restraining order against her husband, claiming he was a drunk and tried to hit her in front of their children. At her request, the court named 19-year-old Rizwan to supervise visits between his father and younger sister, the records show.

In 2008, Farook legally separated from her husband. They were granted a divorce earlier this year.

In her Riverside neighborhood, residents said Farook kept mostly to herself. Her elder son, who served in the Navy, was more outgoing, while Rizwan spent his time working on cars.

According to an FBI affidavit, Rizwan befriended next-door neighbor Enrique Marquez and introduced him to Islam. Marquez, 24, is charged with providing guns used in the attack and plotting an earlier terror attack with Rizwan. He was in court Monday and ordered held.

Immigration records show Rizwan told officials in a letter that he had planned to make a pilgrimage to Saudi Arabia in 2013 with his parents and had arranged for his family to meet the relatives of his intended Pakistani bride.

His letter was released Tuesday by the House Judiciary Committee, which is investigating the issuance of the visa.

Former neighbor Rosie Aguirre said Rafia was seen mostly shuttling to and from work, except when she sometimes donned glittering dresses and headscarves on weekends.

While Rizwan boasted of memorizing the Quran, Rafia apparently was less familiar with the sacred text. Last year, she took a two-month course for women called "Journey Through the Quran" given by the Islamic Circle of North America, a Muslim educational and outreach organization.

The course is offered annually for those less familiar with the Quran, said Waqas Syed, ICNA's deputy secretary general. "This is an attempt to get them interested in actually learning what is in the Quran," he said.

After leaving Kaiser, Farook sold her house for $290,000 and moved in with Rizwan, who worked as an environmental health inspector.

"She had been downsized, and retired, so she needed to cut her expenses," said Linda Holmes, her real estate agent.

Rafia was placed on an addendum to the lease for the townhome in Redlands but her son was footing the monthly $1,200 bill, said landlady Judy Miller, who recalled speaking with her once during a visit to the home.

"She was there with the baby, and was just very, very nice," Miller said.

Shortly after the attacks, David Chesley, a lawyer for the Farook family, said Rafia had never seen anything to suggest her son and daughter-in-law were planning a massacre or building explosives. She spent the first several days after the attack crying, he said.

Since then, she has said nothing publicly and has largely kept out of sight, but returned to the townhome this weekend with family to retrieve some belongings. She also attended a court hearing this month to determine who will take custody of her orphaned granddaughter.

It won't be her — the family's lawyers have said Rafia's older daughter is seeking custody.