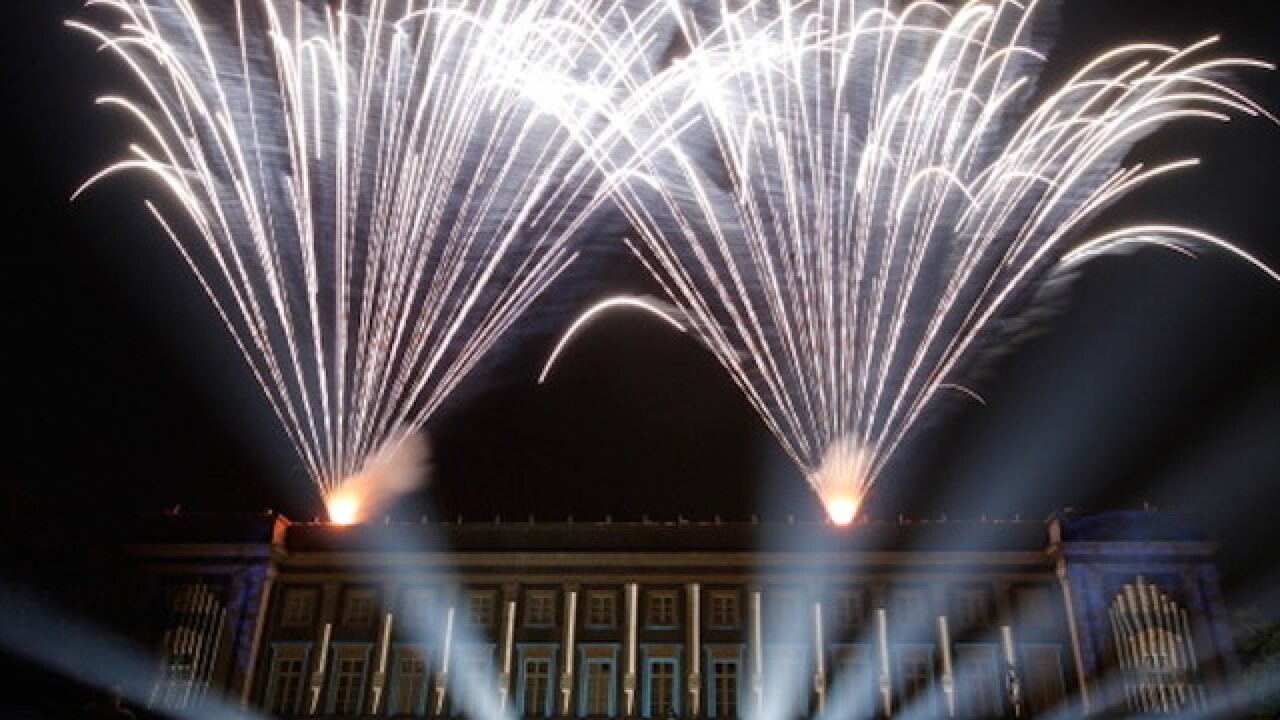 ANKARA, Turkey (AP) — With less than 48 hours left in 2015, Turkey on Wednesday became the latest country to announce the foiling of a holiday attack plot, detaining two suspected Islamic State militants believed to be planning suicide bombings during New Year celebrations in the capital city's heart.

"They were caught before they had the opportunity to take action," said the office of the chief prosecutor of Ankara, Turkey's capital.

The men were detained in a raid on a house in the low-income Mamak neighborhood, where police seized a suicide vest armed with a bomb, a second explosive device that was fortified with ball bearings and metal sticks and concealed inside a back pack, as well as bomb-making equipment, according to the prosecutor's office.

The two men, Turkish nationals identified only by their initials M.C. and A.Y., were being questioned by anti-terrorism police. The prosecutor's office said the men had staked out possible locations in Ankara where they could carry out the attacks.

The state-run Anadolu Agency, quoting unnamed police and judiciary officials, said the would-be bombers had intended to blow themselves up during holiday festivities at bars and a shopping mall in the central Kizilay district.

In Belgium, an investigation was continuing into what authorities characterized as a "serious threat" of holiday season attacks directed at police, soldiers and popular attractions in the capital city of Brussels. The arrest of two suspects was announced Tuesday by the Federal Prosecutor's Office, along with the seizure of military-style training uniforms, computer equipment and propaganda materials from the Islamic State. No weapons or explosives were found.

Brussels officials, however, were sufficiently worried about the remaining risks that Mayor Yvane Mayeur announced Wednesday evening that a New Year's Eve fireworks display and related festivities planned Thursday in the city center are being canceled.

Last year, Mayeur told RTBF French-language television, 100,000 people turned out, and in current circumstances, he said, "we can't guarantee that we can check everyone."

On Thursday, the arrested men, whose names have not been made public, are due to go before a magistrate, who will decide whether to hold them for another month. An official close to the investigation, speaking on condition of anonymity because the case is ongoing, told The Associated Press both suspects belong to a motorcycle club, the Kamikaze Riders, which is known for illegal stunts on public roads.

At least one other member of the Kamikaze Riders is known to have been investigated in the past for possible links to Islamic radicalism, but his former lawyer said Wednesday nothing was ever proven.

Abdelouafi Eloussaki, a founding member of the Kamikaze Riders who died in a motorcycle crash in May 2013, had two younger brothers who were members of the radical group Sharia4Belgium. The group recruited fighters for the Islamist cause in Syria and has been designated a terrorist organization in Belgium. Both brothers also went to Syria, were one was killed and the other badly wounded. Attorney Abderrahim Lahlili told the AP his former client was jailed for a time in Belgium after going to Turkey to fetch his wounded sibling and bring him home. But he said Belgian authorities never definitively linked the older Eloussaki to extremist causes.

Belgian media accounts said Eloussaki had once boasted about being caught in France driving at a speed of 146 mph (235 kph). He reportedly showed no signs of radical extremism, but was a childhood friend of the biker group's founder, who has been convicted of several holdups and has been named by some Belgian media as one of the attack suspects arrested this week.

Four other people have been questioned in the case but released, Belgian authorities said without providing details. Lahlali said all four were members of Kamikaze Riders, and called their release proof the club itself was not suspected of being a hotbed of radical Islamic sentiment.

"This is a group of youngsters from different — and that's important to know — nationalities, and different beliefs," Lahlali said. He said the club, founded in 2003, may have as many as 100 members — including bikers from Italy, Spain, Netherlands and Morocco as well as Belgium — but that it's hard to know since they have no real organization, membership roll or leadership.

"They have barbecues, go riding," Lahlali said. "It's possible some members, some individuals, have a personal agenda, but not the bigger part of the group. They have no connection with Islamic State or another terrorist organization."

Belgium has been one of Europe's leading recruiting grounds for foreign jihadi fighters, and was home to four of the Nov. 13 attackers who killed 130 people in Paris, including suspected ringleader Abdelhamid Abaaoud and fugitive Salah Abdeslam. Nine other people have been arrested in Belgium in investigations linked to the Paris attacks, which were claimed by Islamic State.

On Wednesday, another police search linked to the Paris attacks was carried out in the Molenbeek area of Brussels, and a person detained for questioning, said Thierry Werts, a spokesman for the Federal Prosecutor's Office.

In France, authorities were also clearly preparing for a possible worst-case scenario on New Year's. About 60,000 police and troops were to be deployed throughout the country Thursday. "The same troops who used to be in Mali, Chad, French Guyana or the Central African Republic are now ensuring the protection of French people," said Defense Minister Jean-Yves Le Drian.

A previously scheduled New Year's Eve fireworks show in Paris has been canceled; instead, there will be a five-minute video display at the Arc de Triomphe that, in Mayor Anne Hidalgo's words, is aimed at "sending the world the message that Paris is standing, proud of its lifestyle and living together."

In October, two suicide bombers detonated bombs outside Ankara's main train station as people gathered for a peace rally. The attack killed more than 100 people and was Turkey's deadliest. The prosecutor's office said the attack was carried out by a local Islamic State cell.

More than 30 people were also killed in an Islamic State suicide attack in the town of Suruc, near Turkey's border with Syria, in July.

Earlier this year, Turkey agreed to take a more active role in the U.S.-led battle against the Islamic State. Turkey opened its bases to U.S. aircraft to launch air raids on the group in Syria and has carried out a limited number of strikes itself.

It has also moved to tighten security along its 900-kilometer (560-mile) border with Syria to stem the flow of militants. The private NTV news channel, quoting security sources, said the men detained in Ankara on Wednesday had "frequently" moved in and out of Syria, but that security officials had been monitoring their movements for the past month.