The armed standoff in Oregon continues 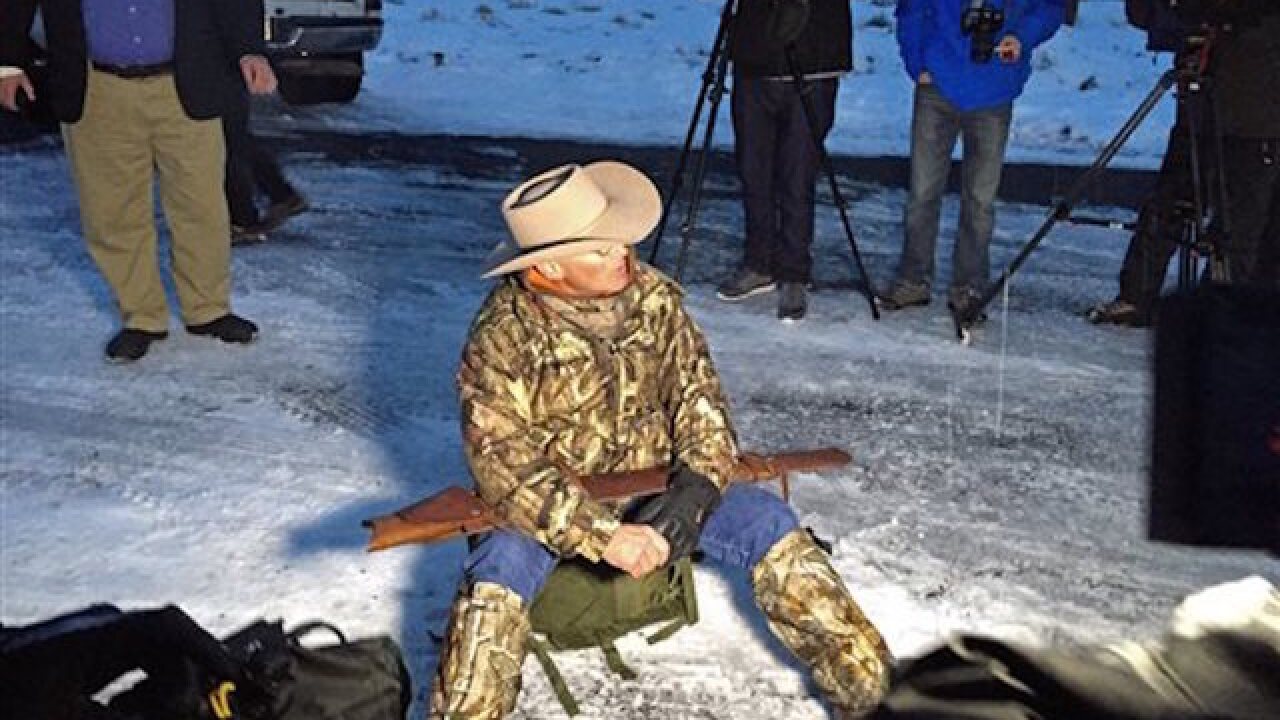 Copyright 2018 Scripps Media, Inc. All rights reserved. This material may not be published, broadcast, rewritten, or redistributed.
Rebecca Boone
Arizona rancher LaVoy Finicum, holding rifle, speaks to reporters at the Malheur National Wildlife Refuge, Tuesday, Jan. 5, 2016, near Burns, Ore. Ammon Bundy, the leader of a small, armed group that is occupying a remote national wildlife preserve in Oregon said Tuesday that they will go home when a plan is in place to turn over management of federal lands to locals. (AP Photo/Rebecca Boone)

BURNS, Ore. (AP) — A small, armed group has been occupying a remote national wildlife refuge in Oregon for a week to protest federal land use policies.

The leader of the group — Ammon Bundy — has repeatedly rejected calls to leave buildings at the refuge despite pleas from the county sheriff, from many local residents, and from Oregon's governor, among others. The standoff is a battle of wills between Bundy and Harney County Sheriff David Ward, who has become the public face of efforts by federal, state and local law officials to end the occupation peacefully. Bundy — who is not an Oregonian — insists he speaks for the interests of Harney County residents. But Ward says the community wants him to go.

HOW DID THIS START?

The group seized buildings at Malheur National Wildlife Refuge on Jan. 2 following a peaceful rally in support of two Oregon ranchers facing additional prison time for convictions of arson. The group says the case of the father-and-son ranchers, Dwight and Steve Hammond, is emblematic of onerous federal land use policies that make it difficult for ranchers, loggers and others in the West.

EXACTLY WHO IS OCCUPYING THE REFUGE?

The group calls itself Citizens for Constitutional Freedom. Ammon Bundy hasn't provided exact numbers but it's believed there are about two dozen people involved - some from as far away as Arizona and Michigan. Ammon Bundy is one of the sons of rancher Cliven Bundy, who was involved in a 2014 Nevada standoff with the government over grazing rights. Ammon Bundy says they will leave when there's a plan in place to turn over federal lands to locals.

WHAT ARE THE AUTHORITIES DOING AND HOW ARE LOCALS REACTING?

Federal and local officials have not moved to oust the group or arrest them. Harney County Sheriff David Ward met Thursday with Bundy. He has said the group needs to go so locals can get back to their lives. While some in the local community are sympathetic to Bundy's group, Ward was cheered at a packed community meeting in Burns, Oregon, on Wednesday evening when he said the group needed to leave.

WHY IS LAND USE SUCH A HOT TOPIC IN THE WEST?

The federal government manages most of the land in many Western states. It owns 85 percent of Nevada, 66 percent of Utah, 62 percent of both Idaho and Alaska, and 53 percent of Oregon. While ranchers and others object to what they say are unfair rules, environmentalists say mining, logging and ranching have run roughshod for decades on public land and left a legacy of pollution for taxpayers to clean up.

WHO ARE THE HAMMONDS?

Dwight Hammond and his son Steven Hammond have distanced themselves from Bundy's group and reported to prison Monday. The Hammonds were convicted of arson three years ago and served no more than a year. A judge later ruled that the terms fell short of minimum sentences requiring them to serve about four more years. Federal officials repeatedly accused the ranchers of breaking environmental laws and declining to follow rules. Over the years, officials refused to renew some of the family's grazing allotments and increased fees on others. They also restricted access to water sources used by the Hammonds. In the local community neighbors described them as kind and generous, supporting charitable causes.

WHERE IS THIS HEADED?

That's anybody's guess. The strategy of law enforcement seems to be to show Bundy and his followers that most local residents want them to leave, and that way avoid a confrontation. With the Hammonds voluntarily going to prison, Bundy's end-game is not clear. He has been using the occupation to speak out for more local control of public lands. Bundy said Friday that at some point he will accept Sheriff Ward's offer of an escort out of the refuge to assure safe passage. Bundy also floated the idea of "transferring what we are doing" to a group local of supporters. On Saturday, a convoy of more than a dozen pickup trucks carrying armed men arrived at the wildlife refuge. Some of the men carrying rifles told journalists they were there to help with security, The Oregonian reported.