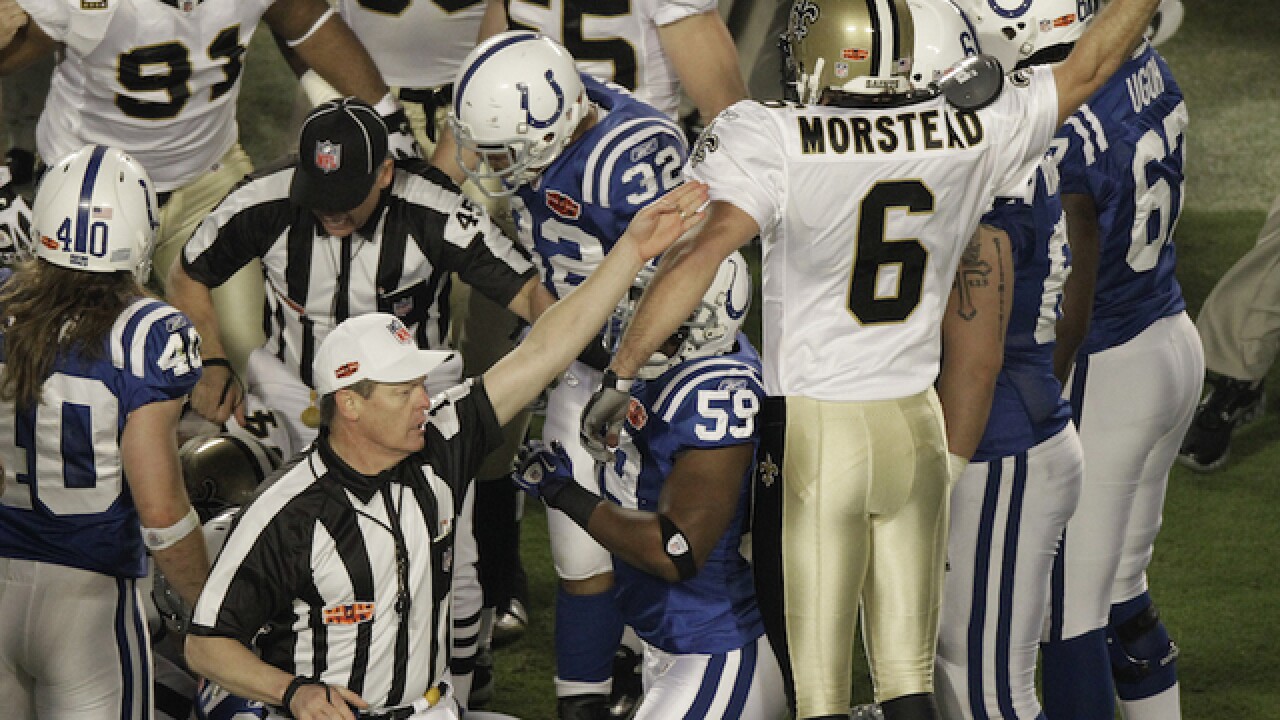 Copyright Associated Press
Charlie Riedel
<p>In this Feb. 7, 2010, file photo, an official signals that the New Orleans Saints will have possession of the ball after an onside kick, as New Orleans Saints punter Thomas Morstead (6) reacts during the second half of the NFL Super Bowl XLIV football game against the Indianapolis Colts, in Miami. The onside kick by Morstead is one of the memorable trick plays in Super Bowl history.</p>

The appetite for gadgets and gimmicks at the Super Bowl is typically low. Surprising the other team with a safety blitz or deep pass, sure, but the risk of true trickery can often seem too steep with a title on the line.

Mess up a clever play in a game of this magnitude and lose a close one in the end? Good luck living that decision down for the rest of your coaching career. The reward of a momentum swing, though, remains a viable reason to roll the dice.

Here's a look back at some of the most memorable trick plays in Super Bowl history:

STICK IT TO 'EM

Dallas had a 10-point lead midway through the fourth quarter in New Orleans on Jan. 15, 1978. After Denver lost a fumble on a sack at its 29-yard line, Cowboys coach Tom Landry ordered the kill shot.

Running back Robert Newhouse grabbed a pitch from Roger Staubach and ran left. He stopped and threw right to Golden Richards for the game-sealing touchdown. ( Click here to see the play. )

The play became even more of a standout afterward, when Newhouse revealed his anxiety in the huddle stemming from an excess of Stickum, the now-banned substance once used by skill-position players to grip the ball more easily, on his hands. Newhouse was hastily scrubbing it off in the huddle once his assignment became clear.

Leading Seattle by four points early in the fourth quarter in Detroit on Feb. 5, 2006, Pittsburgh got the ball back with an interception at its 5-yard line. Three plays later, coach Bill Cowher made a bold call.

Running back Willie Parker handed off to wide receiver Antwaan Randle El on a first-down reverse from the Seahawks 43. Then Randle El, a former college quarterback at Indiana, halted his run and heaved the ball to a wide-open Hines Ward for the 21-10 final score.

That's the only touchdown pass by a wide receiver in Super Bowl history. ( Click here to see highlights from Super Bowl XL, including this play. )

New Orleans stunned Indianapolis by recovering the kickoff to start the second half in Miami on Feb. 7, 2010.

The play was called "ambush," a stutter-step tap by rookie kicker Thomas Morstead out of a standard formation with the Colts leading 10-6. The Saints responded with their first touchdown six plays later and went on to win 31-17.

Coach Sean Payton even drew praise for the daring move from President Barack Obama at the White House ceremony for the first-time champions that summer. ( Click here to see the play. )

— Los Angeles Rams score on 24-yard halfback pass from Lawrence McCutcheon to Ron Smith for two-point third-quarter lead on Pittsburgh Steelers, who came back to win 31-19 in 1980.

— New York Giants use 44-yard flea flicker pass from Phil Simms to Phil McConkey in third quarter to set up short touchdown and pull away from Denver Broncos, on way to 39-20 victory in 1987.

— Denver Broncos complete 23-yard halfback pass from Steve Sewell to John Elway to set up field goal in first quarter for 10-0 lead on Washington Redskins, before falling 42-10 in 1988.